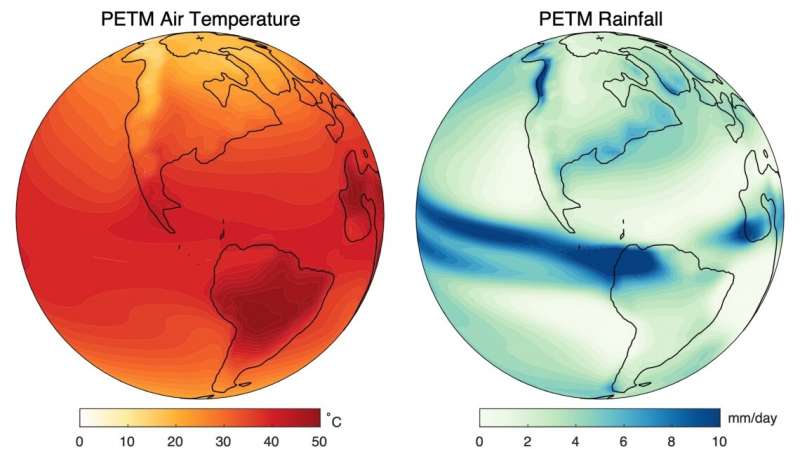 About 56 million years ago, volcanoes quickly dumped massive amounts of carbon dioxide into the atmosphere, heating the Earth rapidly.

This time period—called the Paleocene-Eocene Thermal Maximum, or PETM—is often used as a historic parallel for our own future under climate change, since humans have also rapidly poured carbon dioxide into the atmosphere over the last 250 years.

A University of Arizona-led team of researchers published a study in Proceedings of the National Academy of Sciences that includes temperature and rainfall maps of Earth during the PETM to help better understand what conditions were like in that time period and how sensitive the climate was to soaring levels of carbon dioxide.

The team, led by UArizona geosciences professor Jessica Tierney, combined previously published temperature data and climate models to confirm that the PETM is, in fact, a good indicator of what might happen to the climate under future carbon dioxide level projections.

“The PETM is not a perfect analog for our future, but we were somewhat surprised to find that yes, the climate changes we reconstructed share a lot of similarities with future predictions as outlined in the latest IPCC (Intergovernmental Panel on Climate Change) AR6 report,” Tierney said.

The long-ago time period and our future both are characterized by faster warming at the poles than the rest of the globe—a phenomenon called arctic amplification—as well as stronger monsoons, more intense winter storms and less rainfall at the edges of the tropics. The researchers also found that as more carbon dioxide is pumped into the air, the climate becomes more sensitive than previous studies predicted.

“Overall, our work helps us to understand our future under climate change better,” Tierney said. “It gives some confirmation that the basics of climate change—such as polar amplification, more intense monsoons and winter storms—are features of high greenhouse gas climates both past and future.”

The climate models used by the researchers to create the maps of the past are typically used to make future climate predictions—including those in the IPCC assessment reports. Tierney and her team instead used them to generate simulations of what Earth looked like 56 million years ago.

Tierney and her team have used this method in past studies to reconstruct the climate in more recent time periods.

The new study also more precisely estimates how much the globe warmed during the PETM. Previous studies suggested the PETM was 4 to 5 degrees Celsius warmer than the time period right before it. Tierney’s research, however, revealed that that number is 5.6 degrees Celsius, suggesting the climate is more sensitive to increases in carbon dioxide than previously thought.

Climate sensitivity is how much the planet warms per doubling of carbon dioxide.

Ultimately, this means that under higher levels of carbon dioxide than we have today, the planet will get more sensitive to carbon dioxide, which, according to Tierney, “is something that’s important for thinking about longer-term climate change, beyond the end of the century.”

Sasse likely to resign from Senate, putting all eyes on Ricketts