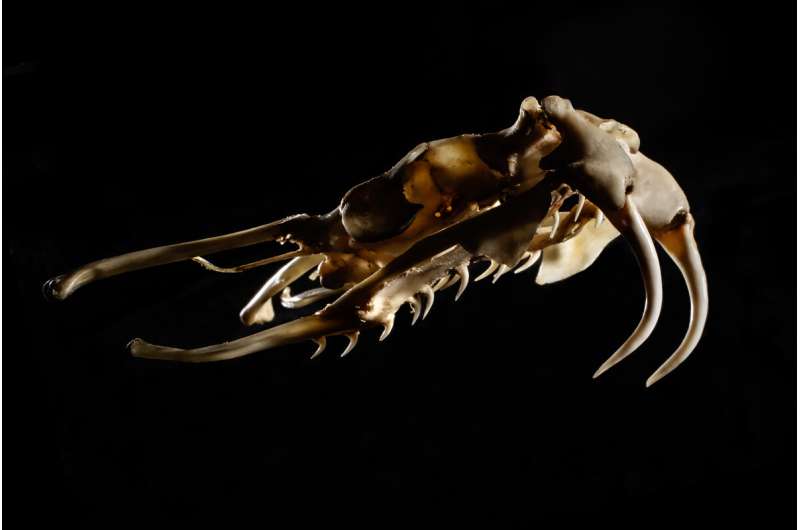 A new model will help biologists calculate the energy involved when one organism stabs another with its puncturing tools. Pictured: A viper skull. Credit: L. Brian Stauffer

Researchers have created a model that can calculate the energetics involved when one organism stabs another with its fangs, thorns, spines or other puncturing parts. Because the model can be applied to a variety of organisms, it will help scientists study and compare many types of biological puncturing tools, researchers said. It also will help engineers develop new systems to efficiently pierce materials or resist being pierced.

The new findings are reported in the Journal of the Royal Society Interface.

“The idea behind this was to come up with a quantitative framework for comparing a variety of biological puncture systems with each other,” said Philip Anderson, a University of Illinois Urbana-Champaign professor of evolution, ecology and behavior who led the research with postdoctoral researcher Bingyang Zhang. “An initial question of this research was how do we even measure these different systems to make them comparable.”

“It’s a challenging problem to predict the properties of biological systems,” Zhang said.

Animals and plants deploy a variety of strategies for stabbing prey or defending themselves from other organisms, and even those that use similar strategies or tools alter those tools to meet their specific needs, the researchers said. Their targets also differ.

“In vipers, for example, some bite mammals, which means they must puncture through soft tissues encased in skin, while others target reptiles, which have scales, making them stiffer and harder to pierce,” said Anderson, who studies the mechanics and energetics of biological puncturing systems.

Other organisms, like parasitoid wasps, may use their ovipositors to burrow through the hides of caterpillars but also can penetrate fruit or even wood, he said.

To develop a model that can be applied to a variety of systems, Zhang determined the key factors that must be included in any calculations of the energetics involved. These include changes in the kinetic energy as the puncturing tool is used, but also take into account the material properties of the target tissue.

This involves calculations describing how the initial kinetic energy drives a puncturing tool into a material, opening up new surfaces in the material as the fracture propagates. It also takes into consideration the frictional resistance and elasticity of the target tissue.

The calculations were aimed at tapered puncturing tools, which are common in biological systems, the researchers said.

Anderson is deploying the new model to aid his studies of puncturing organisms like viper fangs, stingray spines and parasitoid wasp ovipositors.

“If we know the morphology or the shape of the damage created by a puncture tool, we can use this model to predict how much energy was expended during a puncture scenario,” Zhang said. “Or we can predict different aspects of the material’s property, for example, how it will fracture, which will be useful in both engineering and biological applications.”