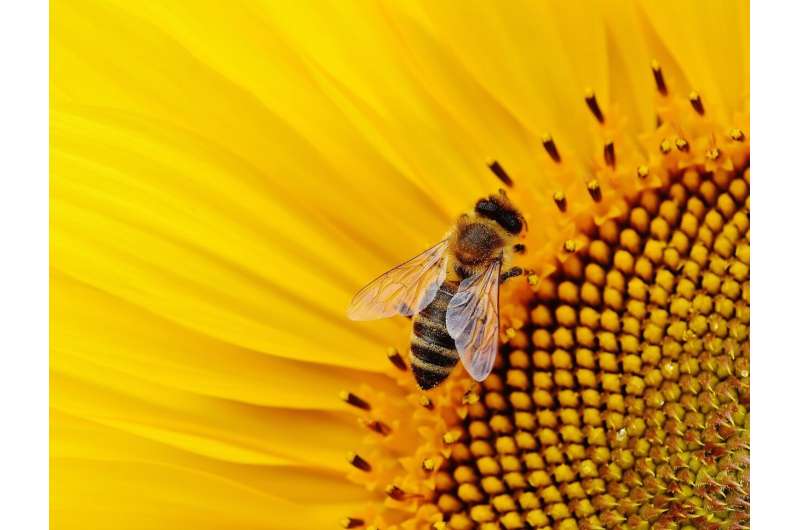 The challenge to let people walk back and forth in a straight line isn’t just used by police to test if drivers are intoxicated: it’s also used by neurologists to diagnose neurological disorders like ataxia, where parts of the brain that coordinate movement are impaired. Now, researchers use an insect version of this challenge to show for the first time that modern pesticides damage the nervous system of honeybees so that it becomes hard for them to walk in a straight line. The results are published in Frontiers in Insect Science.

“Here we show that commonly used insecticides like sulfoxaflor and the neonicotinoid imidacloprid can profoundly impair the visually guided behavior of honeybees. Our results are reason for concern because the ability of bees to respond appropriately to visual information is crucial for their flight and navigation, and thus their survival,” said lead author Dr. Rachel H Parkinson, currently a scientist at the University of Oxford.

The results add to what the Food and Agriculture Organization of the United Nations and the World Health Organization have called the “rapidly growing body of evidence [which] strongly suggests that the existing levels of environmental contamination [from neonicotinoid pesticides] are causing large-scale adverse effects on bees and other beneficial insects.”

Insects have an innate “optomotor response,” which lets them orient themselves back onto a straight trajectory when they threaten to steer off-course while walking or flying. Parkinson and colleagues challenged the optomotor response of walking honeybees to respond accurately and timely to videos of vertical bars that moved from left to right, or vice versa, across two screens in front of them. This “tricks” the bee into assuming that she has suddenly been blown off-course and needs to perform a corrective turn to return to a straight path. A healthy optomotor response will then instruct the bee’s motor system to orient back to an illusory straight line mid-way between the optic flow from right and left.

The researchers compared the efficiency of the optomotor response between four groups of wild-caught forager honeybees, with between 22 and 28 bees tested per group: each had been allowed to drink unlimited 1.5 molar sucrose solution over five days, either pure or contaminated with 50 ppb (parts per billion) imidacloprid, 50 ppb sulfoxaflor, or 25 ppb imidacloprid and 25 ppb sulfoxaflor simultaneously.

All bees were less good at responding to the simulated optic flow when the bars were narrow or moving slowly (i.e., seemingly far away) than when they were wide or moving fast (i.e., seemingly close by). But for any width and speed, the bees who had ingested the pesticides performed poorly compared to control bees. For example, they turned quickly in one direction only and didn’t respond to changes in the direction of movement of the bars, or showed a lack of turning responses. The asymmetry between left and right turns was at least 2.4 times greater for pesticide-exposed bees than for control bees.

The researchers also show with molecular techniques that pesticide-exposed bees tended to have elevated proportion of dead cells in parts of the brain’s optic lobes, important for processing visual input. Likewise, key genes for detoxification were dysregulated after exposure. But these changes were relatively weak and highly variable across bees, and unlikely to be the sole explanation for the observed strong impairment of the optomotor response.

“Neonicotinoid and sulfoximine insecticides activate neurons in the insect brain and are not always recycled fast enough to prevent toxicity. The effects we observed could be due to a type of rewiring in the brain: to prevent neural damage by reducing the sensitivity of neurons to these compounds,” said Parkinson.

Looking ahead, Parkinson says that “to fully understand the risk of these insecticides to bees, we need to explore whether the effects we observed in walking bees occur in freely flying bees as well. The major concern is that—if bees are unable to overcome any impairment while flying—there could be profound negative effects on their ability to forage, navigate, and pollinate wildflowers and crops.”

Trump is hoping to take a U.K. summer swing, but it is up in the air