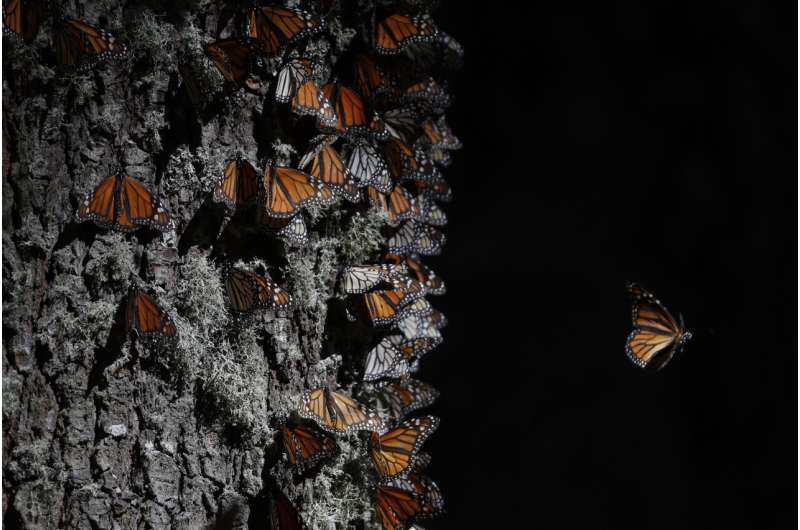 A monarch butterfly takes off from a tree trunk in the winter nesting grounds of El Rosario Sanctuary, near Ocampo, Michoacan state, Mexico, Jan. 31, 2020. The first monarch butterflies have appeared in the mountaintop forests of central Mexico where they spend the winter. Mexico’s Environment Department said Saturday, Saturday, Nov. 5, 2022, that the first butterflies have been seen exploring the mountaintop reserves in Mexico State and Michoacan. Credit: AP Photo/Rebecca Blackwell, File

The first monarch butterflies have appeared in the mountaintop forests of central Mexico where they spend the winter, Mexico’s Environment Department said Saturday.

The first butterflies have been seen exploring the mountaintop reserves in th states of Mexico and Michoacan, apparently trying to decide where to settle this year.

The monarchs have shown up a few days late this year. Normally they arrive for the Day of the Dead observances on Nov. 1 and Nov. 2. Mountainside communities long associated the orange-and-black butterflies with the returning souls of the dead.

The department said the butterflies were seen around their three largest traditional wintering grounds—Sierra Chincua, El Rosario and Cerro Pelón in Michoacan state.

The main group of butterflies is expected to arrive in the coming weeks, depending on weather conditions, the department said in a statement.

It is too early to say how big this year’s annual migration from the United States and Canada will be. Those counts are usually made in January, when the butterflies have settled into clumps on the boughs of fir and pine trees.

The annual butterfly count doesn’t calculate the individual number of butterflies, but rather the number of acres they cover when they clump together.

Last year, 35% more monarch butterflies arrived compared to the previous season. The rise may reflect the butterflies’ ability to adapt to more extreme bouts of heat or drought by varying the date when they leave Mexico.

Each year, generally in March, the monarchs migrate back to the United States and Canada.

Drought, severe weather and loss of habitat north of the border—especially of the milkweed where the monarchs lay their eggs—as well as pesticide and herbicide use and climate change all pose threats to the species’ migration. Illegal logging and loss of tree cover due to disease, drought and storms plague the reserves in Mexico.

This year, the International Union for the Conservation of Nature added the migrating monarch butterfly to its “red list” of threatened species and categorized it as “endangered”—two steps from extinct.

The group estimates the population of monarch butterflies in North America has declined between 22% and 72% over 10 years, depending on the measurement method.

The monarchs’ migration is the longest of any insect species known to science.

After wintering in Mexico, the butterflies fly north, breeding multiple generations along the way for thousands of miles. The offspring that reach southern Canada begin the trip back to Mexico at the end of summer.

Two hits to the mitochondria can cause severe anemia