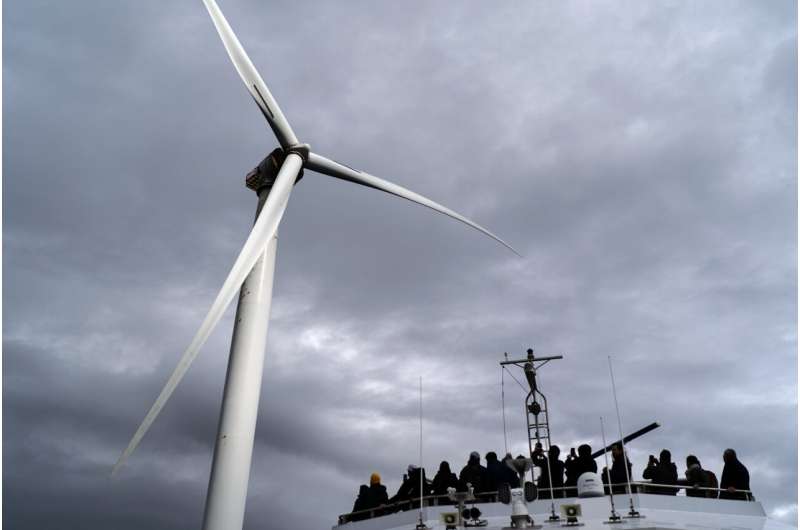 Guests tour one of the turbines of America’s first offshore wind farm, owned by the Danish company, Orsted, off the coast of Block Island, R.I., as part of a wind power conference, Oct. 17, 2022. A new AP-NORC poll shows that nearly two-thirds of Americans think the federal government is not doing enough to fight climate change, even as they have limited awareness about a sweeping new law that commits the U.S. to its largest ever investment to combat global warming. Credit: AP Photo/David Goldman, File

Nearly two-thirds of Americans think the federal government is not doing enough to fight climate change, according to a new poll that shows limited public awareness about a sweeping new law that commits the U.S. to its largest ever investment to combat global warming.

Democrats in Congress approved the Inflation Reduction Act in August, handing President Joe Biden a hard-fought triumph on priorities that his party hopes will bolster prospects for keeping their House and Senate majorities in November’s elections.

Biden and Democratic lawmakers have touted the new law as a milestone achievement leading into the midterm elections, and environmental groups have spent millions to boost the measure in battleground states. Yet the poll by The Associated Press-NORC Center for Public Affairs Research finds that 61% of U.S. adults say they know little to nothing about it.

While the law was widely heralded as the largest investment in climate spending in history, 49% of Americans say it won’t make much of a difference on climate change, 33% say it will help and 14% think it will do more to hurt it.

The measure, which passed without a single Republican vote in either chamber, offers nearly $375 billion in incentives to accelerate expansion of clean energy such as wind and solar power, speeding the transition away from fossil fuels such as oil, coal and natural gas that largely cause climate change.

Combined with spending by states and the private sector, the law could help shrink U.S. carbon emissions by about two-fifths by 2030 and chop emissions from electricity by as much as 80%, advocates say. 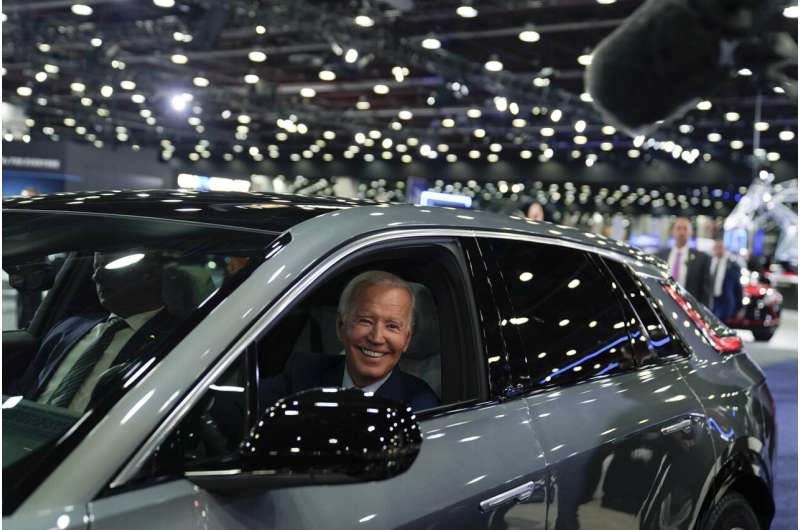 President Joe Biden drives a Cadillac Lyriq through the showroom during a tour at the Detroit Auto Show, Sept. 14, 2022, in Detroit. Americans are generally more likely to support than oppose many of the government actions on climate change included in the law, a new poll by The Associated Press-NORC Center for Public Affairs Research shows. That includes incentives for electric vehicles and solar panels, though relatively few say they are inclined to pursue either in the next three years. Credit: AP Photo/Evan Vucci, File

Michael Katz, 84, of Temple, New Hampshire, said he thinks Biden has “done an amazing amount of work” as president. “I’m sort of in awe of what he’s done,” said Katz, a Democrat and retired photographer. Still, asked his opinion of the Inflation Reduction Act, Katz said, “I’m not acquainted with” it.

After learning about the law’s provisions, Katz said he supports increased spending for wind and solar power, along with incentives to purchase electric vehicles.

Katz said he supports even stronger measures—such as restrictions on rebuilding in coastal areas damaged by Hurricane Ian or other storms—but doubts they will ever be approved.

“People want their dreams to come true: to live near the ocean in a big house,” he said.

Leah Stokes, an environmental policy professor at the University of California, Santa Barbara, said she was not surprised the climate law is so little known, despite massive media coverage when it was debated in Congress, approved and signed by Biden.

The law was passed during the summer, when people traditionally pay less attention to news, “and it takes time to explain it,” especially since many of the law’s provisions have not yet kicked in, Stokes said. 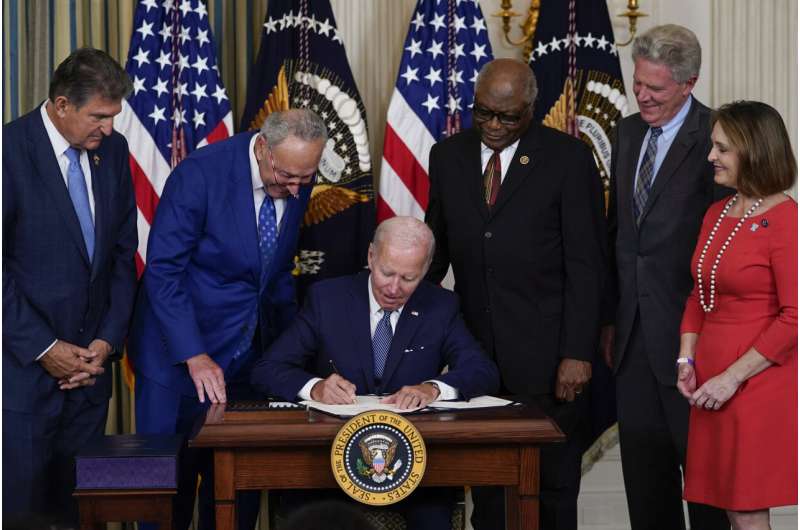 Biden and congressional Democrats “delivered in a big way on climate,” she said, but now must focus on helping the public understand the law and “winning the win.”

Meredith McGroarty, a waitress from Pontiac, Michigan, said she knew little about the new law but supports increased climate action. “I have children I’m leaving behind to this world,” she said.

McGroarty, 40, a Democrat, urged Biden and other leaders to talk more about the climate law’s “effects on normal, everyday people. Let us know what’s going on a little more.”

Americans are generally more likely to support than oppose many of the government actions on climate change included in the law, the poll shows. That includes incentives for electric vehicles and solar panels, though relatively few say they are inclined to pursue either in the next three years.

About half of Americans think government action that targets companies with restrictions is very important, the poll shows, while about a third say that about restrictions on individuals. A majority of Americans, 62%, say companies’ refusal to reduce energy use is a major problem for efforts to reduce climate change, while just about half say people not willing to reduce their energy use is a major problem.

Slightly more than half also say it’s a major problem that the energy industry is not doing enough to supply power from renewable sources such as wind and solar, and about half say the government is not investing enough in renewable energy. 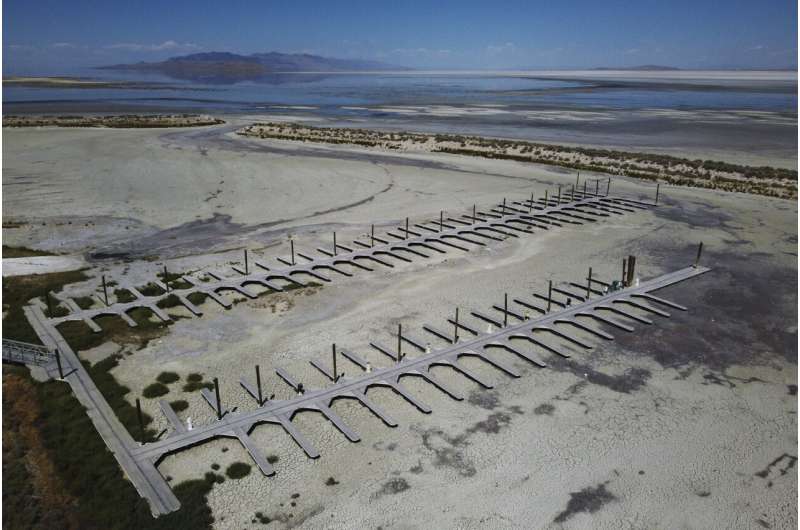 Empty docks are shown at the Antelope Island Marina due to record low water levels Aug. 31, 2022, on the Great Salt Lake, near Syracuse, Utah. A new AP-NORC poll shows that nearly two-thirds of Americans think the federal government is not doing enough to fight climate change, even as they have limited awareness about a sweeping new law that commits the U.S. to its largest ever investment to combat global warming. Credit: AP Photo/Rick Bowmer, File

Overall, 62% of U.S. adults say the government is doing too little to reduce climate change, while 19% say it’s doing too much and 18% think it’s doing the right amount.

Democrats are more likely than others to think the federal government is doing too little on climate: 79% say that, compared to 67% of independents and 39% of Republicans. About three-quarters of Black and Hispanic Americans think there’s too little action, compared to about half of white Americans.

And about three-quarters of adults under 45 think there’s too little action on climate, significantly higher than the roughly half of those older who think that.

Robert Stavins, a professor of energy and economic development at the Harvard Kennedy School, said it makes sense for the government to step in to promote renewable energy on a large scale.

“Individual action is not going to be sufficient in 10 or even 20 years,” he said. “You need government policies to create incentives for industry and individuals to move in a carbon-friendly direction.”

Americans want to own a car, “and they are not going to buy one that’s expensive,” Stavins said, so government needs to lower costs for electric vehicles and encourage automakers to produce more EVs, including widespread availability of charging stations. Biden has set a goal to install 500,000 charging stations across America as part of the 2021 infrastructure law. 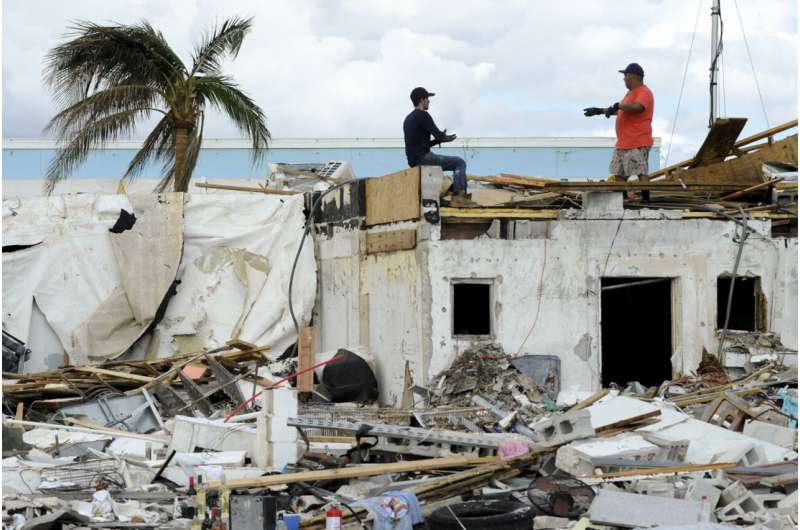 Americans are divided on offshore drilling for oil and natural gas. Around a third say such drilling should be expanded, while about as many say it should be reduced; another third say neither.

Republicans were more likely than Democrats to be in favor of expanding offshore drilling, 54% to 20%.

The poll of 1,003 adults was conducted Sep. 9-12 using a sample drawn from NORC’s probability-based AmeriSpeak Panel, which is designed to be representative of the U.S. population. The margin of sampling error for all respondents is plus or minus 4.0 percentage points.