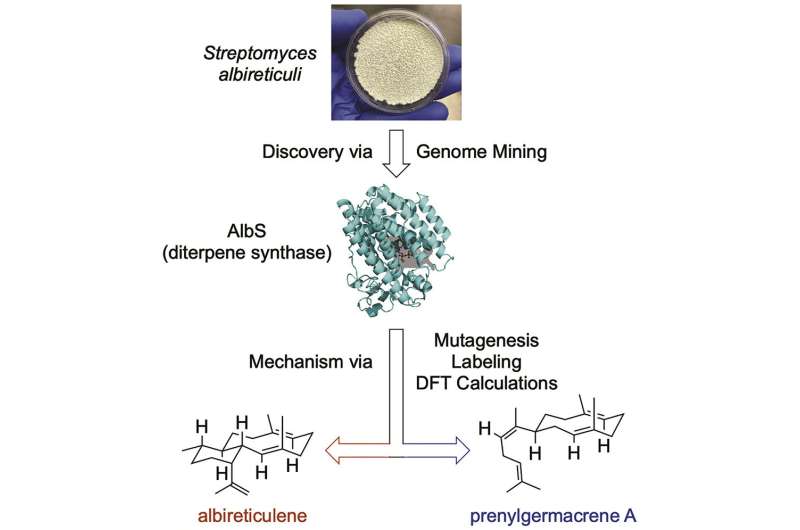 When Jeff Rudolf is explaining his work, he turns to the kitchen.

“Everyone knows the smell of a lemon or a lime. Most people enjoy mint or lavender. Those fragrances are terpenoids,” said Rudolf, a chemist at the University of Florida. “Everyone knows what terpenoids are, even if they don’t know the name.”

In addition to their culinary uses, terpenoids see use as the anti-cancer drug Taxol and the anti-malarial artemisinin. It’s this potential for use in medicine that has attracted Rudolf’s research group to the terpenoids. One of their goals is to understand how nature produces the dizzying array of terpenoids that it does so that humans can harness new kinds of chemicals to improve lives.

In a series of recent papers, including the latest one published Jan. 2 in the journal Chem, Rudolf’s group, in collaboration with Sandra Loesgen, a professor of chemistry at the University of Florida Whitney Laboratory for Marine Bioscience, has discovered how bacteria craft unusual versions of terpenoids, known as eunicellanes. Originally spotted in corals, the eunicellanes show some promise as anti-cancer drugs. The discoveries by Rudolf’s team could open up new avenues to explore the eunicellanes as drug candidates.

The power of shape

By analyzing the genomes of common bacteria, the team discovered two enzymes capable of making basic eunicellane backbones, but with a twist. The two enzymes make backbones that come with opposing shapes. The two forms, known as cis and trans, look similar on paper but likely have unique effects in reality.

“One structural difference in a molecule can totally change the activity just because the shape of the molecule is different,” Rudolf said. Those different activities make it valuable to be able to construct each version of the eunicellane.

And construction is key. These building blocks are essential for drug discovery. Backbones like the eunicellanes are hard for chemists to build in the lab. But enzymes can make them in just one step. So in their research, Rudolf’s group also deciphered how the bacterial enzymes craft these complicated chemical backbones, lessons that can be applied to producing these compounds on demand.

“If we can understand how enzymes can do it, then we can create systems that can bypass complicated synthesis,” Rudolf said.

The eunicellanes they discovered are just precursors for some mystery final products the bacteria are making. So far, nobody knows what these final chemicals are or what bacteria use them for. But Rudolf’s team is trying to find out. After all, these compounds must be useful for the microbes in some way. Perhaps they could be useful to people as well. And by uncovering the steps that lead from starting material to final product, Rudolf’s group can add new tools to the drug-maker’s toolkit.

It’s this toolbox full of nature’s solutions that is our best hope for dealing with threats like antibiotic resistance or intractable cancers.

“We need to discover new drugs and new types of molecules to face these challenges. Looking to nature is one of the best ways to do this,” Rudolf said.

White House to Jim Jordan, James Comer: Sorry, but you have to restart your oversight requests