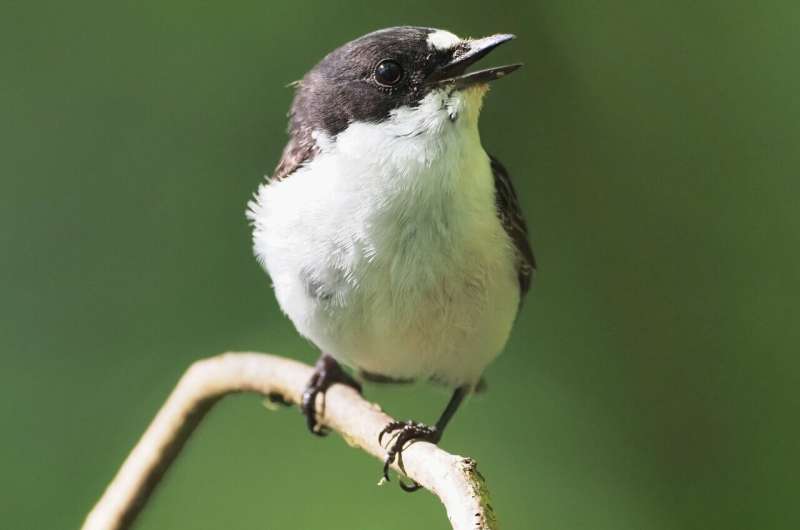 The researchers discovered that the juvenile flycatchers clear response to their own song dialect helped them avoid learning songs from other species in the environment. Credit: Tom Wallis

A recent study, published in Current Biology, led by researchers at Stockholm University and Uppsala University, has shown that juvenile songbirds react to hearing the songs they will eventually produce as adults, even when they are as young as 12 days old. Experiments conducted on nestling pied flycatchers across Europe demonstrate that they preferentially respond to songs from their own species and, remarkably, their own population.

Like human children learning language, juvenile songbirds learn their songs by listening to those produced by their parents and other adults. In both human language and songbird song, the learning process gives rise to small changes from one generation to the next, which leads to characteristic differences among populations, called dialects.

The study shows that pied flycatcher songs from 7 European populations form clearly defined dialects. By broadcasting songs to almost 2,000 nestlings and observing their responses, the researchers demonstrate that young flycatchers respond to songs that are more similar to those from their own dialect by begging for food.

“These results establish that birds are ‘tuned’ from a young age to recognize their own populations’ songs, which focuses subsequent learning,” says David Wheatcroft, Associate Professor at the Department of Zoology, Stockholm University, who is the lead author of the study.

“An alternative is that nestlings recognize their own dialect innately,” says David Wheatcroft.

He hopes these results will lead to future studies investigating how these dialect-specific responses develop and their consequences.

“If differences in early song responses among populations are truly innate, it would suggest a remarkable co-evolution between a cultural trait and the genes underlying it. Singing the local dialect is thought to help adults attract appropriate mates.”

The researchers also found that dialect-specific responses may help prevent learning the songs of surrounding species. Pied flycatcher nestling responses to the songs of a closely related species, the collared flycatcher, were as weak as those to songs from other pied flycatcher dialects. Thus, the ability to discriminate against the songs of other species arises as a by-product of strong respondes to the local dialect.

These results demonstrate that even when behaviors, such as songs, are learned, they can be tuned in remarkably specific ways when there are benefits of getting it right.