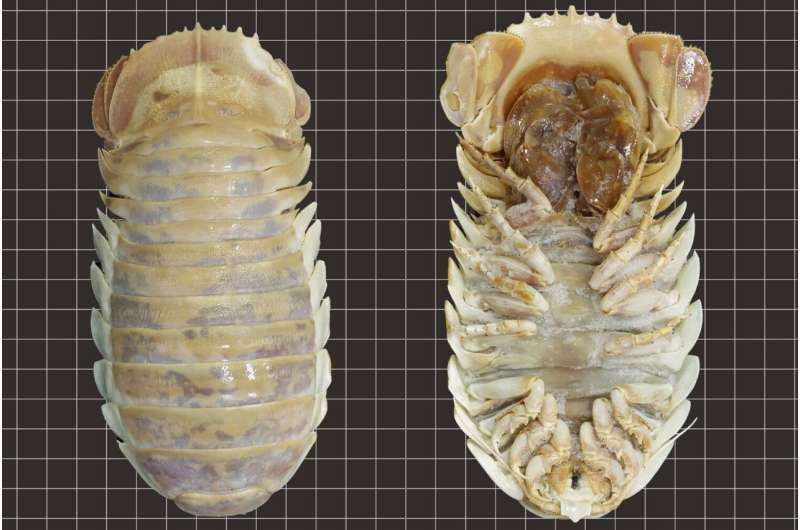 Researchers have identified a new species of Bathonymus, the famed genera of deep-sea isopods whose viral internet fame has made them the most famous aquatic crustaceans since Sebastian of “The Little Mermaid.”

There are around 20 species of living Bathonymus, a mysterious and primitive group that inhabits the benthic zone of the ocean—its deepest reaches, rarely explored in person. Isopod crustaceans are only distantly related to their better-known decapod relatives, the crabs, shrimp, and lobsters.

Publishing their findings in the Journal of Natural History, a group of Taiwanese, Japanese, and Australian researchers reveal the latest creature to this list: B. yucatanensis, a new species which is around 26 cm long, some 2,500% larger than the common wood louse.

Deep sea isopods belong to the same group that contains the terrestrial isopods known variously as wood lice, pillbugs, and roly polys, which feed on decaying matter and are likely familiar to anyone who has lifted up a rock or dug around in the garden. Indeed, they look quite similar but for their extraordinary size—the largest of them grow to nearly 50 centimeters. And, just like wood louse, although they perhaps look a little scary, they are completely harmless to humans.

Their strange features and unusual dimensions have spawned endless memes and a range of products celebrating their endearing weirdness, from plush toys to phone cases.

This finding of B. yucatanensis brings another addition to the isopod pantheon and brings the total of known species of Bathonymus in the Gulf of Mexico to three—B. giganteus was described in 1879 and B. maxeyorum was described in 2016.

It was initially thought to be a variation of B. giganteus, one of the largest of the deep-sea isopods. But closer examination of the specimen, which was captured in a baited trap in 2017 in the Gulf of Mexico off the Yucatán Peninsula at around 600 to 800 meters down, revealed an array of unique features.

“B. yucatanensis is morphologically distinct from both B. giganteus and B. maxeyorum,” the authors claim.

Held by the Enoshima Aquarium in Japan, the individual studied was subtly different than its relatives. “Compared to B. giganteus, B. yucatanensis has more slender body proportions and is shorter in total length … and the pereopods [thoracic limbs] are more slender,” the researchers observe. It also has longer antennae. The two species have the same number of pleotelson spines. These spines protrude from the tail end of the crustacean.

“Bathynomus giganteus was discovered over a century ago, and more than 1,000 specimens have been studied with no suggestion until now of a second species with the same number of pleotelsonic spines,” they add. “Superficial examination, using only pleotelson spines, could easily result in specimens of B. yucatanensis being misidentified as B. giganteus.”

“Compared with B. maxeyorum, the most distinctive feature is the number of pleotelson spines—11 spines in B. yucatanensis versus 7 in B. maxeyorum.” The blotchy, creamy yellow coloration of the shell further distinguished it from its greyer relatives.

In order to be sure, the scientists conducted a molecular genetic analysis comparing B. giganteus and B. yucatanensis. “Due to the different sequences of the two genes (COI and 16S rRNA), coupled with differences in morphology, we identified it as a new species,” they write. The phylogenetic tree they constructed showed B. yucatanensis as most closely related to B. giganteus.

“B. giganteus is indeed the species closest to B. yucatanensis,” the authors assert. “This indicates that the two species likely had a common ancestor. Additionally, there may also be other undiscovered Bathynomus spp. in the tropical western Atlantic.”

The paper also clarifies that specimens from the South China Sea identified as B. kensleyi are actually B. jamesi. B. kensleyi is restricted to the Coral Sea, off the coast of Australia.

“It is increasingly evident that species of Bathynomus may be exceedingly similar in overall appearance, and also that there is a long history of misidentification of species in the genus,” the authors caution.

They note that these newly established species distinctions have implications for conservation. “Some species of Bathynomus with commercial potential have become the targets of deep-sea trawl fisheries,” they say. While giant isopods are only sporadically exploited, “for the management of Bathynomus fisheries, it is important to know precisely which species are being caught.”