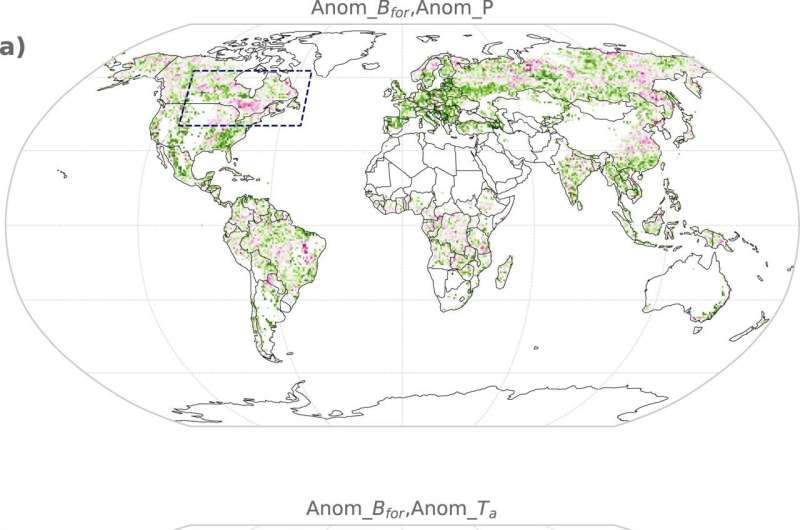 Vegetation and soils are the main carbon sinks on land, as they currently absorb almost a third of carbon dioxide emissions caused by humans and thereby substantially help to slow down global warming. Alongside energy production and industry, land use contributes substantially to global anthropogenic CO2 emissions.

However, forests and woodlands do not sequester carbon as reliably as previously assumed: Their function as a carbon sink is subject to large annual fluctuations and they are susceptible to various environmental influences even without direct human activity. This was revealed by the results of a new modeling approach developed by a team under LMU geographer Prof. Julia Pongratz.

According to these results, not only direct human activities such as deforestation or re-/afforestation determine the effectiveness of the forest as a carbon sink. Natural environmental factors such as forest fires and extreme weather events, and indirect anthropogenic influences such as increasing atmospheric CO2 concentration additionally influence the amount of carbon that can be sequestered by trees and other woody vegetation.

To better understand these dynamics, Selma Bultan, a member of Pongratz’s team and lead author of the study, has developed a methodology that enables scientists to distinguish the direct effects of human land use on global CO2 fluxes from those of natural environmental factors on the basis of satellite and other Earth observation data.

“We integrate Earth observation data into a model that simulates CO2 fluxes from land use. Colleagues from NASA provided us with new global vegetation data covering the last twenty years,” explains Selma Bultan. The development of this new modeling approach was possible thanks to the extensive spatial and temporal coverage of the data.

Human and environmental influences on the carbon cycle can be distinguished

“Our study tackles the challenge of separating direct human influences through land use from indirect side effects and natural processes,” explains Pongratz.

“This differentiation is important, because isolating the direct anthropogenic effects shows the true progress achieved by climate protection measures. The environmental effects, by contrast, indicate how reliably the biosphere on land absorbs and stores CO2 from the atmosphere. If we constantly feed the model used in this study with new data, it can help scientists monitor the success of climate protection measures—especially the implementation of international agreements to reduce CO2 emissions from land-use change, such as deforestation. This facilitates an objective evaluation of the degree to which countries are meeting their climate targets.”

The study also addresses the question of how climate change affects the ability of vegetation to store carbon. “Our results show that the CO2 sink in forests and woodlands is subject to stronger annual fluctuations and responds more sensitively to extreme events like droughts than previously assumed,” says Bultan.

“Thanks to these findings, we can better estimate the potential contribution of land use to climate protection—for instance, through the use of technologies to actively remove CO2 from the atmosphere.”

Both LMU scientists also contribute to the Global Carbon Project (GCP), an international joint effort of researchers, studying the dynamics of global CO2 fluxes, synthesized in an annual report. According to the latest report, land use currently causes around nine percent of all anthropogenic CO2 emissions. How humans deal with ecosystems on land is therefore also critically important for meeting the climate targets of the Paris Agreement.

Researchers can now draw on an extensive database of remote sensing images from satellites for integration into process-based models to foster our understanding of the global carbon cycle and to monitor how climate change evolves and how successful climate protection measures to mitigate it are. “Time is on our side: The satellite era now covers a sufficiently long time period to let us track the consequences of political developments on deforestation or observe the influence of increasing drought events on vegetation,” says Raphael Ganzenmüller, another LMU geographer who was involved in the study.

“The more data we have—for instance on grassland vegetation and on organic carbon in the soil—the more precisely we can estimate natural and anthropogenic CO2 fluxes, fostering our understanding of the whole terrestrial carbon cycle,” says Selma Bultan.

An increased temporal resolution of the data could also enable scientists to analyze the influence of short-term extreme events such as individual droughts within a single year. “Our study reveals the potential of integrating observation data into models for more robust estimates of global CO2 fluxes—this demonstrates the ever-increasing possibilities opened up by satellite-based Earth observation.”

The research was published in Nature Communications.