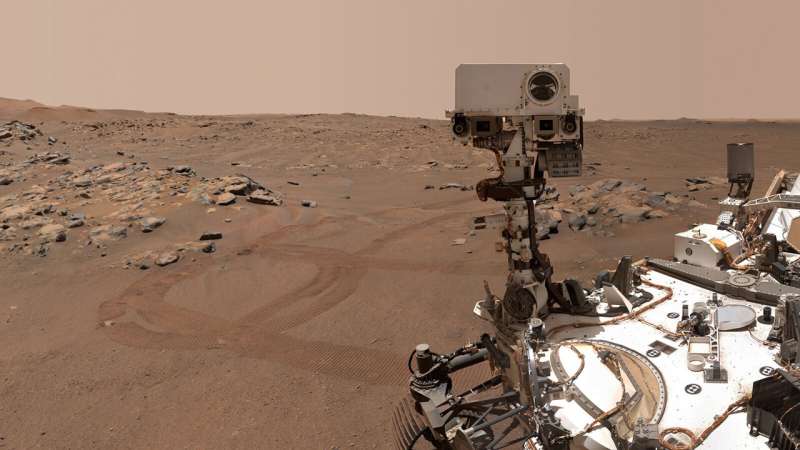 NASA’s Perseverance Mars rover took this selfie over a rock nicknamed “Rochette” on Sept. 10, 2021, the 198th Martian day or Sol, of the mission. Two holes can be seen where the rover used its robotic arm to drill rock core samples. Credit: NASA/JPL-Caltech/MSSS.

Scientists on NASA’s Perseverance mission made a surprising discovery about the composition of rock in Jezero Crater, one that will help them get a better idea of when water existed on Mars, and ultimately, help them understand if the red planet was ever habitable to microbial life.

“The SuperCam instrument suite of remote chemical and mineralogical tools on the Perseverance rover has made some exciting new detailed observations regarding Jezero Crater’s history that could not be fully understood before landing,” said Sam Clegg, deputy principal investigator for SuperCam. “This exciting new data will really help us better understand when the crater held water, and it also gives us insight into Mars’ climate history.”

The new research, published Aug. 25 in Science Advances, shows that Jezero Crater is largely made up of igneous rock, rather than sedimentary rock.

The crater where Perseverance landed in 2021 held water billions of years ago. For that reason, scientists predicted that rock in the area would be sedimentary, formed over time from settled mud, which would be the case for lakebeds on Earth. But to their surprise, they found that rock in Jezero is igneous, which is formed by volcanic magma.

Igneous rock is easier to date and could give researchers a more accurate way to estimate when Mars had water.

The rock analysis was done by SuperCam, a Los Alamos National Laboratory-designed instrument. SuperCam uses a focused infrared laser beam to remove dust and material from rock surfaces in a technique called laser-induced breakdown spectroscopy (LIBS). The energy burst from each five-nanosecond pulse creates a flash; its optical spectrum (specific colors) reveals the elemental chemistry of targets up to about 25 feet away.

“Finding these igneous rocks in the bed of an ancient lake on Mars was quite a surprise. One would have expected lakebed sediments, but it shows that Mars’ history is more complicated than expected, including lava flows in this ancient site,” said Roger Wiens, principal investigator on the SuperCam instrument.