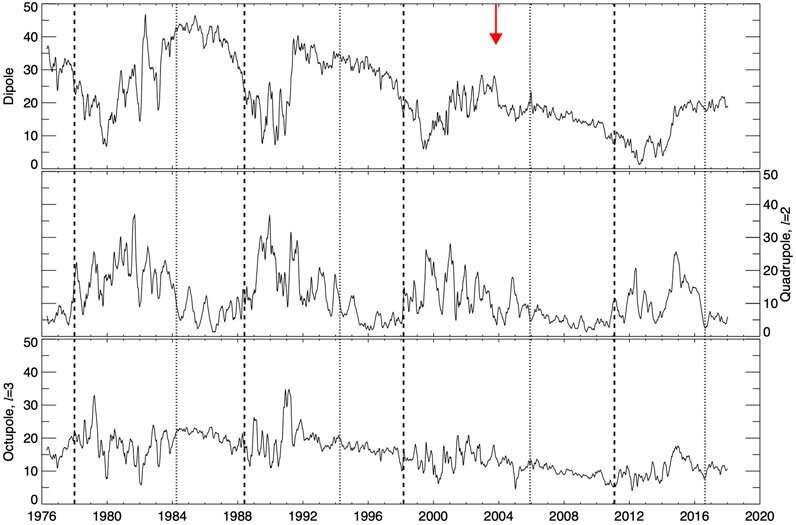 Evolution of the solar dipole and multipole components from the Wilcox Solar Observatory expansion of the coronal magnetic field. Dashed lines represent terminators; dotted lines represent the pre-terminators. The red arrow corresponds to the Halloween Storms of 2003—note the drop in dipole moment (top panel) with no parallel in any other cycle. Credit: Robert J. Leamon et al, Frontiers in Astronomy and Space Sciences (2022). DOI: 10.3389/fspas.2022.886670

Ever since humans could first observe sunspots about 400 years ago, we’ve been using them to try to define the solar cycle. Approximately every 11 years, solar activity such as sunspots and solar flares ebbs and flows, causing changes to weather patterns on Earth and occasionally threatening telecommunications. Predicting these changes reliably could help everyone from farmers to the military.

Traditionally, scientists have used the concept of a “solar minimum,” when solar activity is reduced, to mark the beginning of each cycle. But the “solar minimum” framework is somewhat arbitrary and imprecise, explains Robert Leamon, research scientist at the Partnership for Heliophysics and Space Environment Research (PHaSER), a UMBC partnership with NASA.

Leamon has led new research showing that a “solar clock” based on the sun’s magnetic field, rather than the presence or absence of sunspots, can precisely describe and predict many key changes throughout the solar cycle. The new framework offers a significant improvement over the traditional sunspot method, because it can predict surges in dangerous solar flares or changing weather trends years in advance.

Specifically, the new research, published in Frontiers in Astronomy and Space Sciences, shows that the solar cycle operates as a distinct sequence of events. Notable and sometimes abrupt changes occur at each one-fifth of a cycle. That’s true regardless of the exact length of a given cycle, which can vary by several months to a year. In a nod to music enthusiasts, Leamon and colleagues call it a “circle of fifths.”

The new paper by Leamon and colleagues Scott McIntosh, at the National Center for Atmospheric Research (NCAR), and Alan Title, at the Lockheed Martin Advanced Technology Center, builds on work by Leamon, McIntosh, and Daniel Marsh, also at NCAR, published in 2020. That paper demonstrated the existence of a solar cycle phenomenon the research team dubbed “the terminator.”

The sun’s magnetic field changes direction each solar cycle, but there is overlap between consecutive cycles. The sun’s magnetic field is sometimes called the polar field because it either points to one of the sun’s poles or the other. A terminator marks when the previous cycle’s polar field has completely disappeared from the sun’s surface, and is quickly followed by a dramatic rise in solar activity.

The new paper points to additional landmarks along the journey through a full solar cycle from terminator to terminator. These landmarks are clearer and more consistent than using sunspots as a guide to cycle length. For example, “The max number of sunspots doesn’t quite align with when the polar field reverses, but the polar field reversal happens at exactly one-fifth of the cycle going from terminator to terminator,” Leamon says.

At two-fifths of a cycle, dark areas called “polar coronal holes” re-form at the sun’s poles. At three-fifths of a cycle, the last X-flare, a class of very large and potentially dangerous solar flares, occurs. At four-fifths, sunspots are at a minimum—but this landmark is less consistent. And then the sun passes through another terminator, after which solar activity rapidly picks up again. Other phenomena, such as UV emissions, also line up nicely on the fifths.

The team picked out patterns in data collected daily by two ground-based observatories. The Dominion Radio Astrophysical Observatory in Penticton, Canada has measured solar radio flux, which serves as a useful proxy for solar activity, daily since 1947. The Wilcox Solar Observatory at Stanford University has collected daily measurements of magnetic fields on the sun’s surface since 1975.

Once the team noticed the changes that occur at exactly one-fifth of a cycle, they asked, “How many different solar things can we look at? And then we realized they all overlap on this same set of fifths,” Leamon says. Different parameters shift at different points on the cycle, but “everything is tied to these five landmarks.”

This new theory of a solar clock changes the focus from sunspots to shifts in magnetic field. “It’s almost like symptoms and causes,” Leamon says. While sunspots are an important symptom, the magnetic field is the underlying cause driving the solar cycle.

This shift in framework improves researchers’ ability to predict events in the solar cycle more precisely and further in advance, which gives people like satellite operators time to make preparations as needed based on predicted solar activity. Once observatories detect an initial polar field reversal, the precise length of the first fifth of the cycle is set. That means the timing of the other fifths (and their associated events) is a simple matter of multiplication.

The new framework also puts tighter bounds on the period within the cycle when severe flares are expected, which is useful information for people on Earth. Rather than a gradual shift from minimum to maximum activity, the period from terminator to about three-fifths of a cycle seems to be the peak period for flares, with a rapid drop-off after that point until the next terminator. The current cycle began after a terminator in December 2021, and the new framework predicts the last major flares should occur in mid-2027.

Leamon points to a quote by physicist Richard Feynman to explain the value of a theory like this one, that accounts for many variables within a system: “Nature uses only the longest threads to weave her patterns, so that each small piece of her fabric reveals the organization of the entire tapestry,” Feynman said. The new theory from Leamon and colleagues is an example of one of these long threads—precisely predicting many aspects of the solar cycle with a single, simple parameter, and making it easier for humans to be ready for changes driven by the sun.

How do human body–associated microbes spread? The transmission landscape of human microbiomes