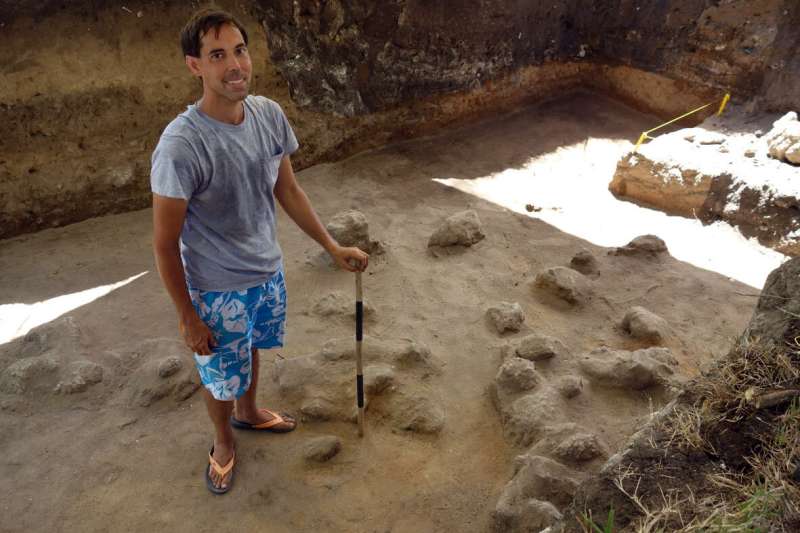 University of Guam archaeologist Michael Carson at the 2013 excavation of Sanhalom, near the House of Taga, on the island of Tinian in the Northern Mariana Islands. The excavation uncovered an octopus lure artifact from a layer that Carson has since carbon dated to 1500–1100 B.C., making it the oldest known artifact of its kind in the world. Credit: Micronesian Area Research Center, University of Guam

An archaeological study has determined that cowrie-shell artifacts found throughout the Mariana Islands were lures used for hunting octopuses and that the devices, similar versions of which have been found on islands across the Pacific, are the oldest known artifacts of their kind in the world.

The study used carbon dating of archaeological layers to confirm that lures found on the Northern Mariana Islands of Tinian and Saipan were from about 1500 B.C., or 3,500 years ago.

“That’s back to the time when people were first living in the Mariana Islands. So we think these could be the oldest octopus lures in the entire Pacific region and, in fact, the oldest in the world,” said Michael T. Carson, an archaeologist with the Micronesian Area Research Center at the University of Guam.

The study, titled “Let’s catch octopus for dinner: Ancient inventions of octopus lures in the Mariana Islands of the remote tropical Pacific,” is published in World Archaeology, a peer-reviewed academic journal. Carson, who holds a doctorate in anthropology, is the lead author of the study, assisted by Hsiao-chun Hung from The Australian National University in Canberra, Australia.

The fishing devices were made with cowrie shells, a type of sea snail and a favorite food of octopuses, that were connected by a fiber cord to a stone sinker and a hook.

They have been found in seven sites in the Mariana Islands. The oldest lures were excavated in 2011 from Sanhalom near the House of Taga in Tinian and in 2016 from Unai Bapot in Saipan. Other locations include Achugao in Saipan, Unai Chulu in Tinian, and Mochom at Mangilao Golf Course, Tarague Beach, and Ritidian Beach Cave in Guam. 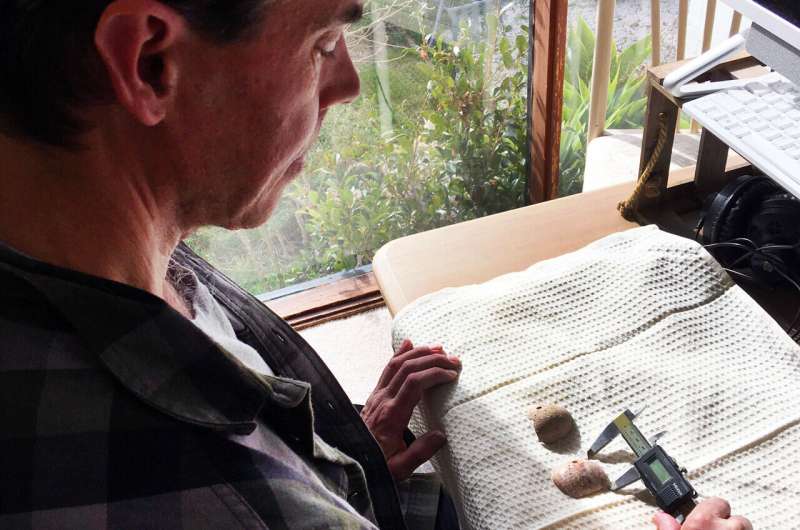 University of Guam archaeologist Michael Carson measures a cowrie shell from an ancient octopus lure from the Mariana Islands. Carson’s published research on cowrie-shell artifacts found in the Mariana Islands has confirmed their use as octopus lures and has dated them to 1500 B.C., the oldest known artifacts of their kind. Credit: Hsiao-chun Hung, The Australian National University

“The artifacts have been known—we knew about them. It just took a long time considering the possibilities, the different hypotheses, of what they could be,” Carson said. “The conventional idea—what we were told long ago from the Bishop Museum [in Honolulu]—was that these must be for scraping breadfruit or other plants, like maybe taro. [But] they don’t look like that.”

The shells didn’t have the serrated edge of other known food-scraping tools. With their holes and grooves where the fiber cord would have been attached as well as the stone sinker components, they appeared a closer match to octopus lures found in Tonga from about 3,000 years ago, or 1100 B.C. 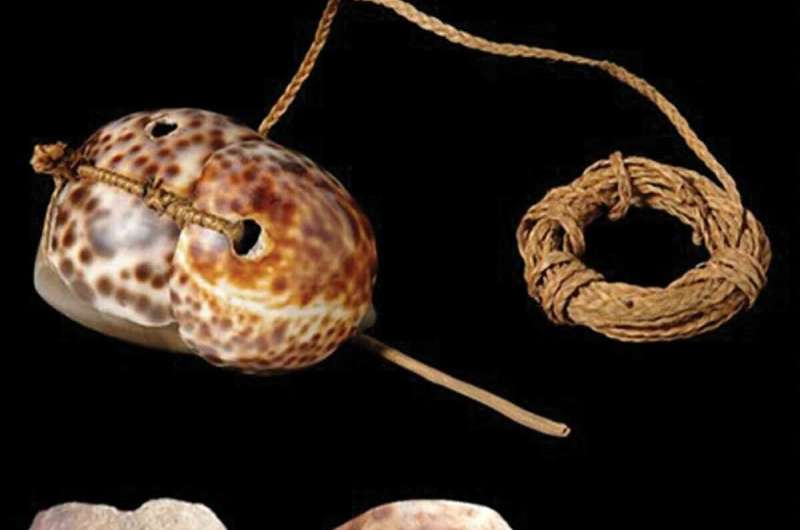 (Top image) A re-created example of an ancient octopus lure from Tonga housed at the Pitt Rivers Museum in England. The lure is made from two cowrie shells, each with drilled holes, bound to a stone sinker using a fiber cord. (Lower images) Exterior and interior views of cowrie shell octopus lures from (left to right) House of Taga on the Northern Mariana Island of Tinian, 1100–500 B.C.; Unai Bapot on the Northern Mariana Island of Saipan, 1500–1100 B.C.; and the House of Taga in Tinian, 1500–1100 B.C. Credit: Tonga lure image courtesy of Pitt Rivers Museum, Artifact Registration 1886.1.1279.2. Mariana Islands lure images courtesy of the Micronesian Area Research Center, University of Guam.

An invention of the ancient CHamorus?

Carson said the question now becomes: Did the ancient CHamoru people invent this adaptation to their environment during the time when they first lived in the islands?”

That’s a possibility, he said, the other being that they brought the tradition with them from their former homeland; however, no artifacts of this kind have yet been discovered in the potential homelands of the first Marianas settlers.

If the CHamoru people did invent the first octopus lures, it provides new insight into their ingenuity and ability to problem solve—having to create novel and specialized ways to live in a new environment and take advantage of an available food source.

“It tells us that […] this kind of food resource was important enough for them that they invented something very particular to trap these foods,” Carson said. “We can’t say that it contributed to a massive percentage of their diet—it probably did not—but it was important enough that it became what we would call a ‘tradition’ in archaeology.” 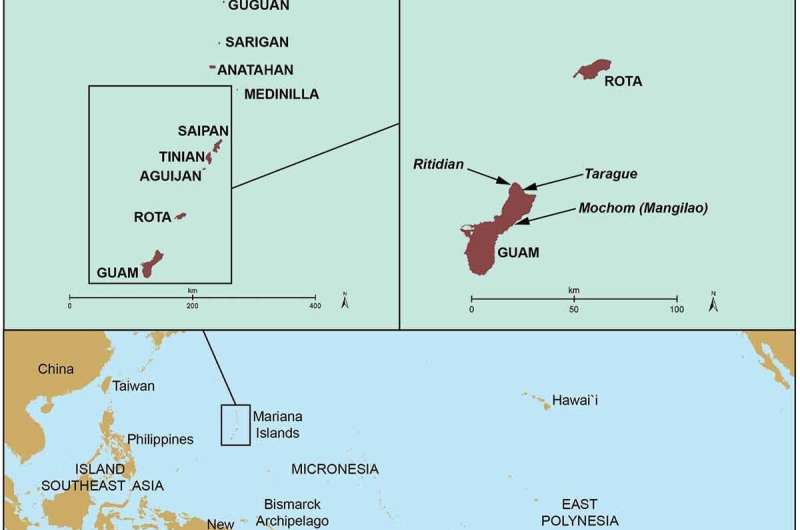 Study sites in the Mariana Islands, shown within the Asia-Pacific region. Ancient octopus lures have been found at seven of these archaeological sites. Credit: University of Guam

The next question to look at, Carson said, is whether there are similar objects anywhere else from an older time.

“Purely from an archaeology standpoint, knowing the oldest of something is always important—because then you can track how things change through time,” he said. “[…] The only other place that would be is in the overseas homeland area for the first CHamoru people moving to the Marianas. So we would look in islands in Southeast Asia and Taiwan for those findings.”