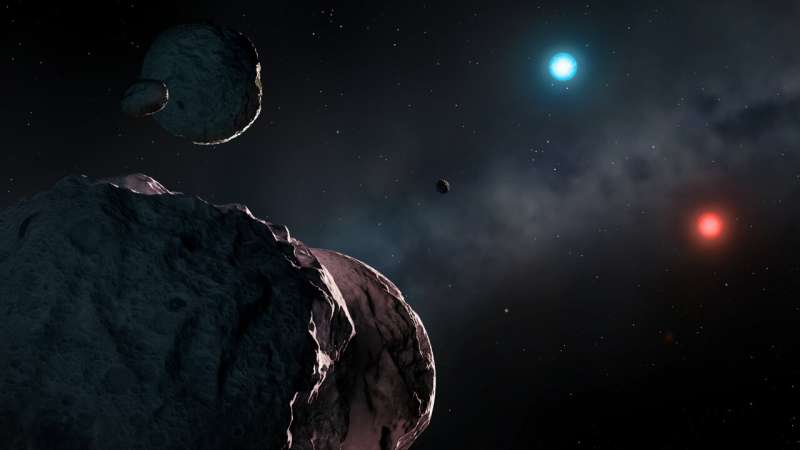 Artist’s impression of the old white dwarfs WDJ2147-4035 and WDJ1922+0233 surrounded by orbiting planetary debris, which will accrete onto the stars and pollute their atmospheres. WDJ2147-4035 is extremely red and dim, while WDJ1922+0233 is unusually blue. Credit: University of Warwick/Dr Mark Garlick. Credit: University of Warwick/Dr Mark Garlick

Astronomers led by the University of Warwick have identified the oldest star in our galaxy that is accreting debris from orbiting planetesimals, making it one of the oldest rocky and icy planetary systems discovered in the Milky Way.

Their findings are published today (Nov. 5) in the Monthly Notices of the Royal Astronomical Society and conclude that a faint white dwarf located 90 light years from Earth, as well as the remains of its orbiting planetary system, are over 10 billion years old.

The fate of most stars, including those like our sun, is to become a white dwarf. A white dwarf is a star that has burnt up all of its fuel and shed its outer layers and is now undergoing a process of shrinking and cooling. During this process, any orbiting planets will be disrupted and in some cases destroyed, with their debris left to accrete onto the surface of the white dwarf.

For this study the team of astronomers, led by the University of Warwick, modeled two unusual white dwarfs that were detected by the space observatory GAIA of the European Space Agency. Both stars are polluted by planetary debris, with one of them being found to be unusually blue, while the other is the faintest and reddest found to date in the local galactic neighborhood—the team subjected both to further analysis.

Using spectroscopic and photometric data from GAIA, the Dark Energy Survey and the X-Shooter instrument at the European Southern Observatory to work out how long it has been cooling for, the astronomers found that the “red” star WDJ2147-4035 is around 10.7 billion years old, of which 10.2 billion years has been spent cooling as a white dwarf.

Spectroscopy involves analyzing the light from the star at different wavelengths, which can detect when elements in the star’s atmosphere are absorbing light at different colors and helps determine what elements those are and how much is present. By analyzing the spectrum from WDJ2147-4035, the team found the presence of the metals sodium, lithium, potassium and tentatively detected carbon accreting onto the star—making this the oldest metal-polluted white dwarf discovered so far.

The second “blue” star WDJ1922+0233 is only slightly younger than WDJ2147-4035 and was polluted by planetary debris of a similar composition to the Earth’s continental crust. The science team concluded that the blue color of WDJ1922+0233, despite its cool surface temperature, is caused by its unusual mixed helium-hydrogen atmosphere.

The debris found in the otherwise nearly pure-helium and high-gravity atmosphere of the red star WDJ2147-4035 are from an old planetary system that survived the evolution of the star into a white dwarf, leading the astronomers to conclude that this is the oldest planetary system around a white dwarf discovered in the Milky Way.

Lead author Abbigail Elms, a Ph.D. student in the University of Warwick Department of Physics, said, “these metal-polluted stars show that Earth isn’t unique, there are other planetary systems out there with planetary bodies similar to the Earth. 97% of all stars will become a white dwarf and they’re so ubiquitous around the universe that they are very important to understand, especially these extremely cool ones. Formed from the oldest stars in our galaxy, cool white dwarfs provide information on the formation and evolution of planetary systems around the oldest stars in the Milky Way.”

“We’re finding the oldest stellar remnants in the Milky Way that are polluted by once Earth-like planets. It’s amazing to think that this happened on the scale of 10 billion years, and that those planets died way before the Earth was even formed.”

Astronomers can also use the star’s spectra to determine how quickly those metals are sinking into the star’s core, which allows them to look back in time and determine how abundant each of those metals were in the original planetary body. By comparing those abundances to astronomical bodies and planetary material found in our own solar system, we can guess at what those planets would have been like before the star died and became a white dwarf—but in the case of WDJ2147-4035, that has proven challenging.

Abbigail explains, “The red star WDJ2147-4035 is a mystery as the accreted planetary debris are very lithium and potassium rich and unlike anything known in our own solar system. This is a very interesting white dwarf as its ultra-cool surface temperature, the metals polluting it, its old age, and the fact that it is magnetic, makes it extremely rare.”

Professor Pier-Emmanuel Tremblay of the Department of Physics at the University of Warwick said, “when these old stars formed more than 10 billion years ago, the universe was less metal-rich than it is now, since metals are formed in evolved stars and gigantic stellar explosions. The two observed white dwarfs provide an exciting window into planetary formation in a metal poor and gas-rich environment that was different to the conditions when the solar system was formed.”

Senate control could go either way despite Republican momentum