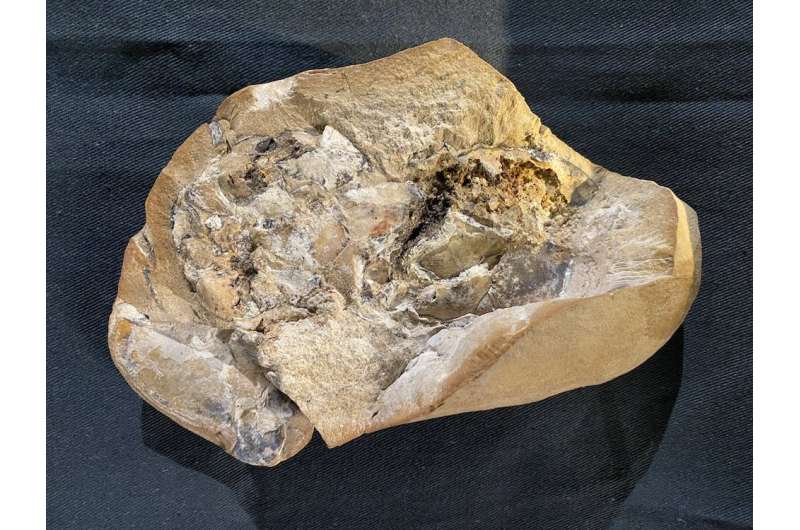 The Gogo fish fossils used in this study were discovered within rocks found in the Kimberley. Credit: Curtin Univeristy

In the limestone ranges of Western Australia’s Kimberley region, near the town of Fitzroy Crossing, you’ll find one of the world’s best-preserved ancient reef complexes.

Here lie the remnants of myriad prehistoric marine animals, including placoderms, a prehistoric class of fish that represents some of our earliest jawed ancestors.

Placoderms were the rulers of the ancient seas, rivers and lakes. They were the most abundant and diverse fishes of the Devonian Period (419–359 million years ago)—but died out at the end in a mass extinction event.

Studying placoderms is important as they provide insight into the origins of the jawed vertebrate body plan (vertebrates are animals with backbones). For instance, placoderms have revealed when the first jaws, teeth, paired skull bones and paired limbs evolved. They’ve also taught us about the origins of internal fertilization and live birth in vertebrate evolution.

Now, in a paper published in Science, we detail our findings of the oldest three-dimensionally preserved heart from a vertebrate—in this case a jawed vertebrate. This placoderm heart is about 380 million years old, and 250 million years older than the previous oldest vertebrate heart.

How did we do it?

Fish fossils from near Fitzroy Crossing were first reported from Gogo Station in the 1940s. But it wasn’t until the 1960s that beautiful 3D preservations were revealed, using a technique that removes rock from bones with weak acetic acid.

However, this technique proved to be a double-edged sword. While the fine details of the bony skeleton were uncovered, soft tissues in the fossils dissolved away. It wasn’t until 2000 that the first pieces of fossilized muscle were identified in placoderms.

With the advent of an X-ray method called “synchrotron microtomography”—first used on the Gogo fossils in 2010—more muscles were revealed from the Gogo placoderms, including neck and abdominal muscles. 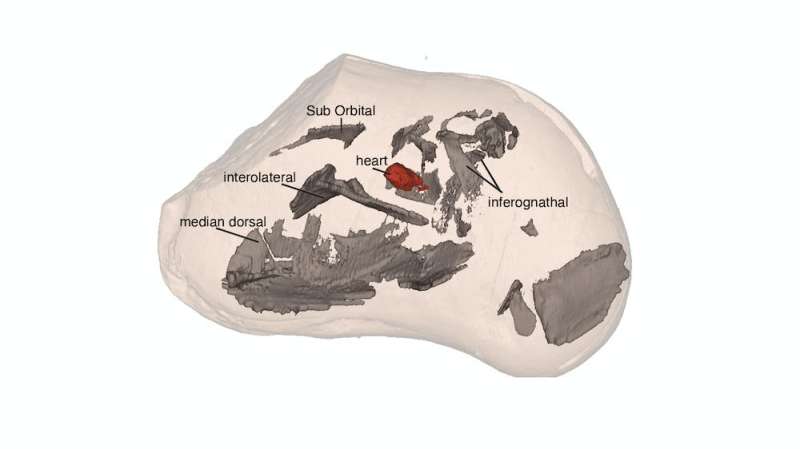 The 3D preserved heart of a placoderm fish from Gogo. The rock entombs the bone shown in grey, shown by neutron beam imaging, and heart in red. Credit: Kate Trinajstic

Our work used this same technology to show, for the first time, the presence of a liver, stomach and intestines in a Devonian fish. Some of the specimens even showed remnants of their last meal: a crustacean.

We found the soft organs fossilized in an order of placoderms called arthrodires. These were the most common and diverse of all known placoderms, characterized by a unique joint between their head and trunk armor.

The heart of the placoderm

The most exciting find for us was the heart. We found our first placoderm heart using synchrotron imagining.

Then while experimenting with a technology called neutron imaging, we discovered a second heart within a different specimen.

Life must have been nerve-racking in the Devonian seas, because placoderms literally had their hearts in their mouths!

At this point in vertebrate evolution, the neck was so short that the heart was located at the back of the throat and under the gills.

Fishes that are even more primitive than arthrodires, such as the jawless lamprey, have their heart close to their liver. And the chambers of the heart (called the atrium and ventricle) sit side by side.

On the other hand, arthrodire placoderms had the heart in a more forward (anterior) position, at the back of the throat. And the atrium sat on top of the ventricle—similar to sharks and bony fishes today. 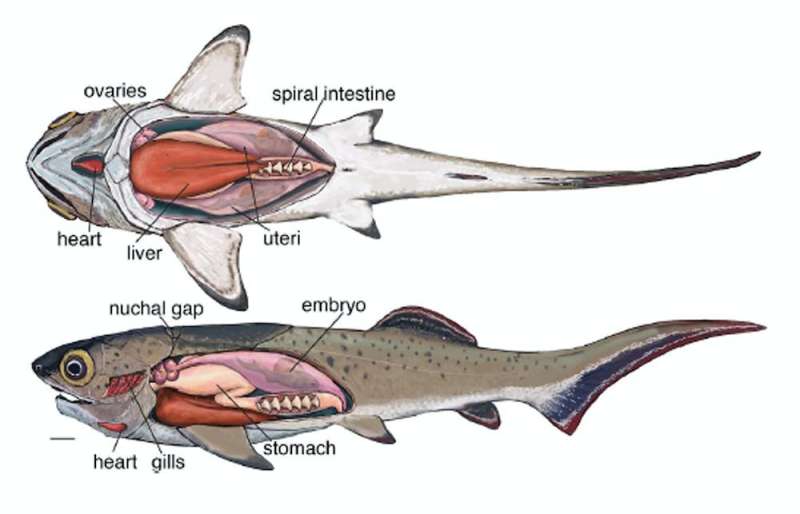 Today, 99% of all living vertebrates have jaws. Arthrodires provide the first anatomical evidence to support the hypothesis that, in jawed vertebrates, the repositioning of the heart to a more forward position was linked to the evolution of jaws and a neck.

But that’s not all. This movement of the heart would also have made room for lungs to develop.

So did placoderms have lungs?

One of the most challenging evolutionary questions today is whether lungs were present in the earliest jawed vertebrates. Although fish have gills, the presence of lungs in some fish can help with buoyancy, which is needed to sink and rise in the water.

Today, lungs are only present in primitive bony fishes such as lungfish and African reedfishes.

More advanced bony fish (such as the teleosts) stay afloat using a swim bladder, whereas sharks have neither lungs nor a swim bladder, and instead use a large fatty liver to help with buoyancy.

But what about ancient placoderms? Previous studies (which were somewhat controversial) suggested lungs were present in a primitive placoderm called Bothriolepis.

Our analysis of the arthrodires from Gogo reveals the structures thought to be lungs in Bothriolepis are in fact a liver with two lobes, so lungs are now thought to have been missing from placoderms.

Our discovery therefore shows a single origin for lungs in bony fishes (osteichthyans). The movement of the heart to a forward position from jawless fishes (Cyclostomata) would have allowed room for lungs to develop in later lineages.

The absence of lungs in placoderms suggests these fish relied on their liver for buoyancy, like modern sharks do. 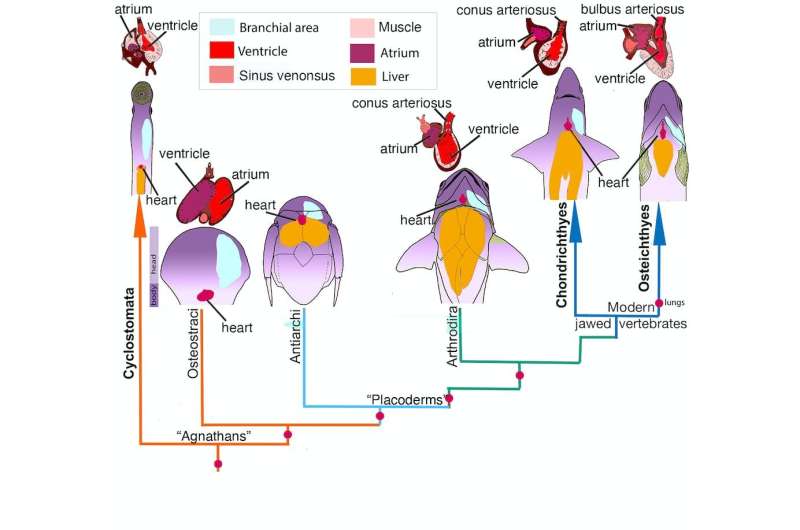 In the fossilized heart we found the atrium and ventricles are shown clearly, while the conus arteriosus—a section of the heart that directs blood from the ventricle to the arteries—is not as well preserved.

Being able to make these discoveries before they’re lost forever is crucial if we are to fully understand the early evolution of vertebrates, including the origins of the human body plan.

So beyond our immediate findings, our work has reinforced the significance of the Gogo site in the Kimberley as one of the world’s most important sites for carrying out this work.