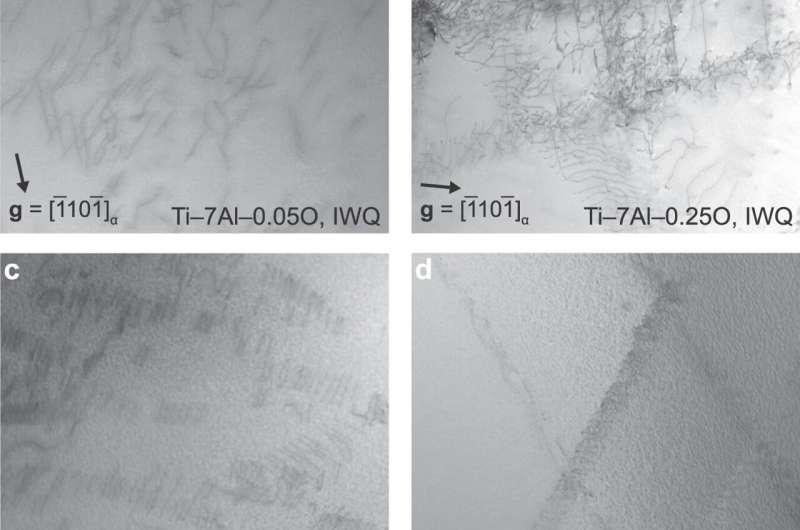 STEM images of dislocation configurations after stress relaxation. The images show defect structures produced in Ti–7Al–0.05O and Ti–7Al–0.25O, in IWQ and aged conditions (550 °C for 49 d). STEM micrographs recorded for two-beam condition around B = {0111} as indicated. a In the low-oxygen, disordered material, dislocations are able to travel freely across a grain. Some dislocation pairing is evident, likely due to short-range order of aluminum that was not suppressed in quenching at such high Al content. b The addition of 2000 ppmw O causes slip band formation, but also promotes significant cross-slip and resulting dislocation interactions. c Ageng to precipitate ordered α2 causes more restricted slip bands, with less cross-slip possible due to the formation of antiphase boundaries between leading and trailing dislocations passing through ordered precipitates. d In the high-oxygen alloy, the α2 dispersion is refined, causing even more severe slip banding. The mottled contrast in (c) and (d) is from the α2 precipitates. Credit: Nature Communications (2022). DOI: 10.1038/s41467-022-33437-z

“Dwell fatigue” is a phenomenon that can occur in titanium alloys when held under stress, such as a jet engine’s fan disc during takeoff. This peculiar failure mode can initiate microscopic cracks that drastically reduce a component’s lifetime.

The most widely used titanium alloy, Ti-6Al-4V, was not believed to exhibit dwell fatigue before the 2017 Air France Flight 066 incident, in which an Airbus en route from Paris to Los Angeles suffered fan disc failure over Greenland that forced an emergency landing. The analysis of that incident and several more recent concerns prompted the Federal Aviation Administration and European Union Aviation Safety Agency to coordinate work across the aerospace industry to determine the root causes of dwell fatigue.

According to experts, metals deform predominantly via dislocation slip—the movement of line defects in the underlying crystal lattice. Researchers hold that dwell fatigue can initiate when slip is restricted to narrow bands instead of occurring more homogenously in three dimensions. The presence of nanometer-scale intermetallic Ti3Al precipitates promotes band formation, particularly when processing conditions allow for their long-range ordering.

Things get dicey when this banding behavior occurs across a contiguous group of ‘soft’-oriented grains, termed a “macrozone,” researchers explained. The resultant deformation concentration, where the band meets a “hard”-oriented grain outside the macrozone, leads to a stress concentration, initiating the cracking process.

A team from Imperial College London provided specimens of specially prepared Ti–7Al, an alloy representing a surrogate for the primary phase in Ti-6Al-4V. The populations of two-point defect types were modulated across the specimens: interstitial oxygen content and the amount of ordered Ti3Al precipitates.

The study, published in Nature Communications, shows that where the Ti3Al exhibits ordering, slip avalanches are more severe in associated stress magnitude. In contrast, increasing the amount of interstitial oxygen appears to reduce the severity, promoting more frequent smaller avalanches.

“This work offers a novel, mesoscale view of the intermittent deformation events (little “bursts” of plastic slip) underpinning dwell fatigue, specifically how the frequency and magnitude of those events depend on oxygen content and alloying,” said co-author and LLNL physicist Joel Bernier. “These data can help guide processing to avoid microstructures that have a deleterious effect on resistance to dwell fatigue.”

Researchers discovered that this deformation mechanism becomes easier to activate after the initial yielding, a softening known to be a precursor to damage accumulation and failure in instances of dwell fatigue. Among the key findings: higher concentration of oxygen interstitials reduced the average magnitude of the basal slip avalanches by promoting more frequent lower-magnitude events.

In contrast, expanding the size of ordered Ti2Al precipitates, by aging the material at an elevated temperature, increased both the frequency and the magnitude of slip avalanches, increasing the probability of crack initiation. According to the team, these findings can help optimize the processing of titanium alloys for resistance to dwell fatigue.