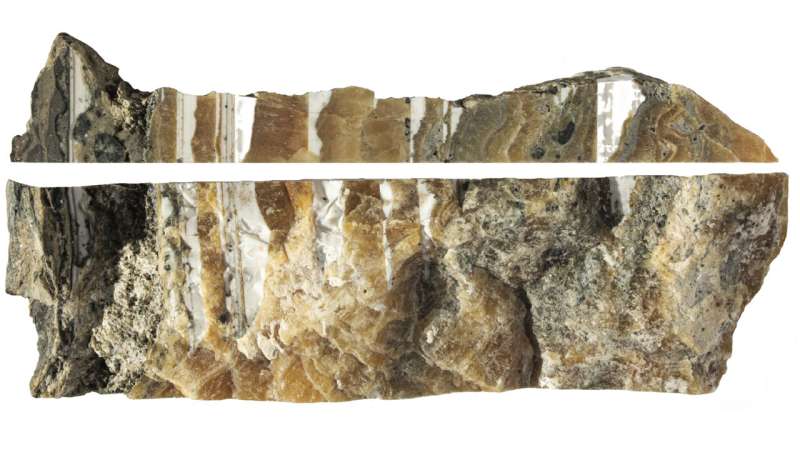 UCSC researchers analyzed two rock samples collected in Eastern Antarctica in which alternating layers of calcite and opal reflect cyclic changes in the subglacial environment. Sample MA113 is 9 centimeters thick and comes from Mount Achernar Moraine on the side of Law Glacier. Credit: Gavin Piccione

By analyzing unusual rock samples collected years ago in Antarctica, scientists at the University of California, Santa Cruz, have discovered a remarkable record of how the East Antarctic Ice Sheet has responded to changes in climate over a period of 100,000 years during the Late Pleistocene.

The East Antarctic Ice Sheet is the world’s largest ice mass. Understanding its sensitivity to climate change is crucial for efforts to project how much sea level will rise as global temperatures increase. Recent studies suggest it may be more vulnerable to ice loss than previously thought.

“One of the key findings is that the ice sheet was responding to temperature changes in the Southern Ocean,” said coauthor Terrence Blackburn, associate professor of Earth and planetary sciences at UC Santa Cruz. “The warm water eats at the edges of the ice sheet and causes the ice to flow faster, and that response reaches deep into the heart of the ice sheet.”

The rock samples analyzed in the study consist of alternating layers of opal and calcite that formed as mineral deposits at the base of the ice sheet, recording cyclic changes in the composition of subglacial fluids.

“Each layer in these samples is a manifestation of a change at the base of the ice sheet driven by changes in the motion of the ice streams,” said first author Gavin Piccione, a Ph.D. candidate working with Blackburn at UCSC.

By dating the layers, the researchers found a striking correlation between the layers of mineral deposits and the record of polar sea surface temperatures derived from ice cores. The opal was deposited during cold periods, and the calcite during warm periods.

“These climate oscillations are causing changes in ice sheet behavior such that the chemistry and hydrology beneath the ice is changing,” said coauthor Slawek Tulaczyk, a professor of Earth and planetary sciences at UCSC who has been studying the behavior of ice sheets and glaciers for decades.

The climate cycles that match the mineral layers are relatively small fluctuations that occur every few thousand years within the more pronounced glacial-interglacial cycles that occurred every 100,000 years or so throughout the Pleistocene. The glacial-interglacial cycles are driven primarily by changes in Earth’s orbit around the sun. The smaller millennial-scale climate cycles involve oscillations in polar temperatures driven by weakening and strengthening of a major ocean current (the Atlantic Meridional Overturning Circulation, or AMOC) which transports large amounts of heat northward through the Atlantic Ocean.

“As important as the Antarctic Ice Sheet is—it’s responsible for close to 17 meters of sea level rise since the last glacial maximum—we really know very little about how it has responded to climate variability,” he said. “We know the last 20,000 years pretty well, but beyond that we’ve been almost blind. That’s why these results are so mind-blowing. People have been banging their heads against the wall over this for decades.”

Sample PRR50489 is 3 centimeters thick and was found at Elephant Moraine in the Transantarctic Mountains. Credit: Gavin Piccione

The two rock samples analyzed for this study were collected from glacial moraines separated by more than 900 kilometers (560 miles), and they formed over different periods covering a total of more than 100,000 years. In other words, they record similar cycles of mineral deposition beneath the ice occurring over a broad area and over long periods of time.

“The chemistry of the two samples matched, even though they came from so far apart, which gave us confidence that some large-scale, systematic process was going on,” Piccione said.

The mechanism behind the formation of layers of opal and calcite is a bit complicated and requires an understanding of not only mineral chemistry but also the unusual hydrology beneath the Antarctic Ice Sheet. Heat from Earth’s interior (“geothermal heating”) causes melting at the base of the ice sheet, which is insulated from frigid polar temperatures by the thickness of the ice. Where the ice gets thinner toward the margins of the ice sheet, subglacial meltwater begins to refreeze, concentrating dissolved minerals and eventually forming hypersaline brines.

Mineral deposits form as the water becomes concentrated by refreezing, and the first thing to precipitate is calcite, the most common form of calcium carbonate. Opal (amorphous silica) will eventually precipitate from older, supersaturated brines that don’t have any carbon left in them.

“Antarctica has these interesting brines with no carbon in them, because it all precipitated out earlier, so when those brines are isolated from other sources of water they form opal,” Piccione explained.

To get a layer of calcite on top of the opal requires an influx of carbon-containing glacial meltwater, which occurs during warm intervals in the climate cycles, when the AMOC slows down. That leads to warming in the Southern Hemisphere and brings warm water into contact with the floating ice shelves at the edges of the ice sheet. As the warm water eats away at the bottom of the ice shelves, the “grounding line” where the ice contacts land begins to retreat and ice flows more rapidly from the interior out to the edges.

Tulaczyk explained that the motion of the ice over the bedrock generates heat, increasing the amount of meltwater at the base of the ice sheet. “If you imagine a map of where there is meltwater under the ice sheet, that area expands in warm periods and contracts in cold periods, like a heartbeat,” he said.

The resulting “freeze-flush cycles” at the base of the ice account for the alternating layers of opal and calcite in the rocks.

The findings point to water temperatures in the Southern Ocean as the main mechanism driving the response of the Antarctic Ice Sheet to changes in the global climate. Temperatures in Antarctica are so cold that a few degrees of warming won’t cause surface melting of the ice, yet scientists know the ice sheet has melted in the past and parts of it have collapsed, Blackburn said. “It’s been hard to understand, but this shows clearly that ocean warming is the driving mechanism,” he said.

“If you look at the places that are losing ice today, they are concentrated along the edges of the ice sheet where it is in contact with the warming ocean,” Tulaczyk added. “The primary driver of ocean warming now is atmospheric carbon dioxide, not the AMOC, but I don’t think the ice sheet cares what causes the warming.”

Tulaczyk said the findings do show that the ice sheet can retreat during warm periods and then recover during subsequent cooling. “In the context of the threshold question—is the ice sheet sitting on a threshold beyond which there would be runaway melting and it will all go—that’s not what I see here,” he said. “The ice is sensitive to these short-term fluctuations, but the magnitude of ice loss is small enough that it can recover with cooling.”