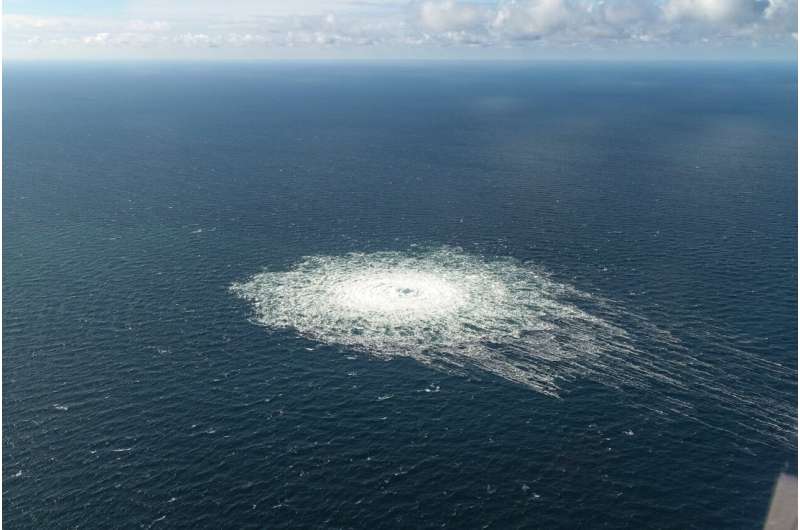 Researchers from the Institute of Atmospheric Physics, Chinese Academy of Sciences, estimated the possible climatic impact of the leaked methane by adopting the energy-conservation framework of the Intergovernmental Panel on Climate Change’s Sixth Assessment Report.

On September 26, 2022, Nord Stream 1 and 2, two subsea pipelines for transferring natural gas from Russia to Germany, were both deliberately ruptured. Massive quantities of gases, primarily methane, escaped into the ocean and were then released into the atmosphere.

Methane is the second most abundant anthropogenic greenhouse gas after CO2, but has a much stronger greenhouse effect. Hence, whether negative climatic impacts would arise from this incident became a key concern worldwide. A news article published in Nature commented on this issue, but no quantitative conclusions were made.

Recently, researchers from the Institute of Atmospheric Physics, Chinese Academy of Sciences, estimated the possible climatic impact of the leaked methane by adopting the energy-conservation framework of the Intergovernmental Panel on Climate Change’s Sixth Assessment Report (IPCC AR6), released in 2021. Their findings have recently been published in Advances in Atmospheric Sciences.

Having collected all estimates of the total amount of leaked methane available in the world’s media after the incident, it was found that the earliest estimates (1-2 days after) reached up to 0.5 million tons (Mt). However, it later became clear that the quantity of methane that leaked was likely to be much lower than first estimated. In particular, a team from Nanjing University, China, provided a more accurate estimate of 0.22 ± 0.03 Mt by drawing upon multiple observations including those from high-resolution satellites.

This value established that this was the largest methane emission in a single event in human history—more than two times that of the Aliso Canyon accident in California in 2015. However, according to IPCC AR6, annual emissions of methane from the oil and gas sectors amounted to as much as 70 Mt during the period 2008-2017. The leaked methane from the Nord Stream pipelines was equivalent to only 1 day worth of emissions from these sectors.

IPCC AR6 also highlighted that methane in the atmosphere is gradually removed by reacting with certain radicals, such as hydroxyl radical, resulting in an approximate 10-year lifetime, which is short-lived compared to CO2. This means that the climatic impact of methane depends on the time horizon, which complicates matters when trying to calculate it directly. Instead, the researchers made an indirect estimate with the help of the concept of “global warming potential.” Specifically, they determined that the quantity of heat accumulated per unit mass of methane in the next 20 years after its emission into the atmosphere is 82.5 times that of CO2.

Then, armed with this information, they were able to calculate that when considering a time horizon of 20 years, the climatic impact of the leaked methane is equivalent to that of 20.6 Mt of CO2, which would raise the atmospheric CO2 concentration by only 0.0026 ppm. Based on the newest assessments in IPCC AR6 of the effective radiative forcing under doubled CO2, climate feedback, and ocean heat uptake efficiency, under the energy conservation framework, the global mean surface air temperature would in theory increase by 1.8×10−5 ℃.

“Such a tiny warming cannot be perceived in ecosystems or human society,” explains Dr. Xiaolong Chen, first author of the study. “Still, anthropogenic methane has been the second largest driver of global warming, and is emitted from multiple sectors of agriculture and industry. If we are going to achieve the warming target of below 1.5℃ or 2℃ set out in the Paris Agreement, damage to infrastructure such as this should be avoided so that we can better control and reduce methane emissions.”

Crypto kingpin bet a fortune on Democrats. Now he’s lost it all.