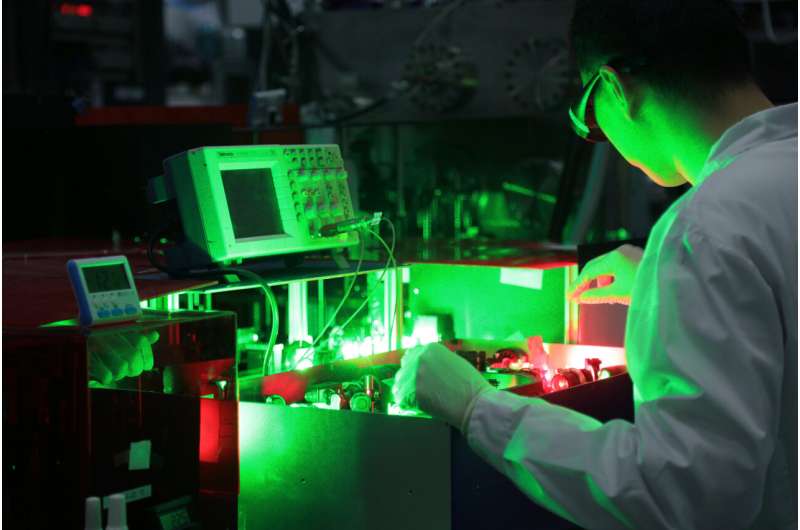 A researcher working on the laser for controling the direction of the bond axis of HD molecules. Credit: DICP

Researchers have observed steric effects—the interactions of molecules depending on their spatial orientation (not just between their electrons involved in bonding)—in a chemical reaction involving non-polar molecules for the first time. The breakthrough opens the door to an entirely new way to control the products of chemical reactions.

A paper describing the research team’s findings was published in the journal Science on Jan. 12.

One of the central goals of chemistry is to develop new methods of controlling chemical reactions. For the most part, control of chemical reactions involves understanding of the interactions between the electrons of different atoms. These “electronic” effects govern many of the properties and behavior of chemicals and the changes they undergo during reactions.

But the relative spatial arrangement of atoms within molecules also affects their properties, behavior and the changes they can undergo. Many people will be familiar with the story of thalidomide, the drug responsible for a number of severe birth defects in the 1950s. The error that occurred that caused the tragedy was related to how a chemical with an identical formula to another one—but a mirror-image structure—can have different biological effects.

The study of how these spatial arrangements affect chemical reactions, so-called “steric effects,” and how to manipulate such effects, comprises the subdiscipline known as stereochemistry, sometimes called “3D chemistry” for its focus on the orientations of atoms and molecules in three-dimensional space.

These effects are the result of repulsive forces between overlapping electron clouds. The complement of opposite and like charges produce a particular 3D shape in a molecule, including the angles between atoms and the axis of the chemical bond (“bond axis”).

The researchers specialize in attempting to control the direction of the bond axis of molecules involved in chemical reactions—a way to manipulate chemical reactions beyond traditional methods such as adding suitable catalysts and changing the temperature or pressure of a reaction mixture.

“In many people’s minds and even in some chemistry textbooks, the structure and shape of a molecule are subliminally ignored in the physical picture of a chemical reaction,” said Yufeng Wang, the lead author of the study and chemist with the State Key Laboratory of Molecular Reaction Dynamics at the Chinese Academy of Sciences. “But molecules cannot be simply taken as a point of mass. The structure and shape of the reactant molecule can have profound influences on the chemical reaction.”

In turn, the mutual orientation of reactants colliding with each other also has a major effect on the outcome of the chemical reaction. Thus, by controlling that orientation, it should be possible to promote or restrict the yield of the products of the reactions into specific final states or scattering angles.

Experiments attempting this sort of colliding molecular-orientation control have been performed for a number of years on polar molecules. Polar molecules are those such as—most famously—water, where due to unequal sharing of electrons between the component atoms, the molecule has an end that is negative and an end that is positive.

But they have not been performed on non-polar molecules. Non-polar molecules, such as molecular oxygen or nitrogen, are composed of atoms that share electrons equally and thus have no charge. Yet there should be very large steric effects because the lack of charge will produce very weak “steering” interactions en route to the collision.

Molecular hydrogen (H2), another non-polar molecule, should be a good candidate for such orientation-control scattering experiments, not least due to its simplicity of each atom having just one proton and one electron (and thus enjoying considerable theoretical tractability).

Until recently, however, it has been difficult to prepare sufficient concentrations of H2 in specific quantum states for scattering experiments. But thanks to the development of a high pulsed enengy and single-longitudinal mode optical parametric oscillator/amplifier, large concentrations of H2 in specific quantum states have become available using the scheme of stimulated Raman pumping. The quantity is now sufficient to study collision dynamics and to align H2 molecules in a particular direction for steric dynamics experiments.

With the advent of this new technique, the researchers wanted to see whether the predicted significant steric effects could be observed in the simplest chemical reactions involving H2 molecules.

For their experiment, the researchers picked a very simple chemical reaction, the transformation of hydrogen (H) and hydrogen deuteride (HD—a hydrogen atom bonded to an atom of deuterium, an isotope of hydrogen with an extra neutron) into molecular hydrogen (H2) and deuterium (D). They collided the chemical reactants at three different collision energies, and also at two different collision geometries—one where the chemical bond was aligned parallel to the relative velocity of the collision partners and one where the bond was aligned in perpendicular fashion.

The research team successfully observed the hypothesized substantial steric effects while using quantum dynamics calculations to analysis their observations in a straightforward manner. They found that when two waves together produce a larger wave in the perpendicular configuration, it plays an important role in the steric effects observed. The chemical reaction changed drastically depending on the direction of the HD bond axis.

The observations and the underlying theoretical understanding open the door to a new way to control chemical reactions.

The next move for the team will be to step up their game by extending this research to more complicated reactions, which will be much more challenging in terms of carrying out experiments and on the theoretical end as well. The ultimate goal is to develop more precise and effective ways of controlling chemical reactions across the board, not just with the simplest of molecules.

State legislatures are coming back. These are the lawmakers to follow.