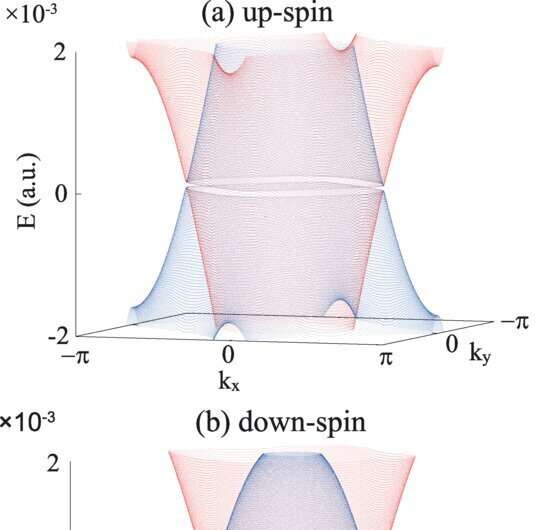 Most ordinary substances are either electrical conductors, like metals, or insulators, like plastic. In contrast, topological insulators can exhibit unusual behavior in which electrical currents flow along the surface of the sample, but not inside the interior. This characteristic behavior is strongly connected to topological properties inherent in the electronic state. Furthermore, a novel phase called a topological semi-metal provides a new playground for exploring the role of topology in condensed matter. However, the underlying physics of these systems is still being pondered.

Researchers at the University of Tsukuba studied the dynamics of excitations in zinc arsenide (Zn3As2) when irradiated with a laser with circular polarization. Zinc arsenide is normally thought of as a narrow-gap semiconductor, which means that electrons are not free to move around on their own but can be easily propelled by energy from an external light source. Under the right conditions, the material can show a special topological state called a “Floquet-Weyl semi-metal,” which is a topological semi-metal coupled with light. In this case, the electrical current can be carried in the form of quasiparticles called Weyl fermions. Because these quasiparticles travel as if they have zero mass and resist becoming scattered, Weyl fermions can move easily through the material.

“Floquet-Weyl semi-metals exhibit a handful of rare properties that can be utilized in electronic devices, including high mobility, titanic magnetic resistance, and spin-polarized currents,” says author Professor Ken-ichi Hino. In the current work, the researchers showed that when a left-handed circularly polarized continuous-wave laser is tuned with a frequency that nearly matches the energy gap in the material, the spin-down electrons and spin-up ones form different phases, a Weyl semi-metal and a narrow gap insulator. The latter one is in the vicinity of another topological semi-metal called nodal-line semi-metal.

“Our exploration of the transient dynamics of excitations in zinc arsenide can deepen the understanding of the underlying physics of these materials,” says senior author Runnan Zhang. This basic research can also help hasten the development of techniques for light-induced surface magnetization of nonmagnetic materials.