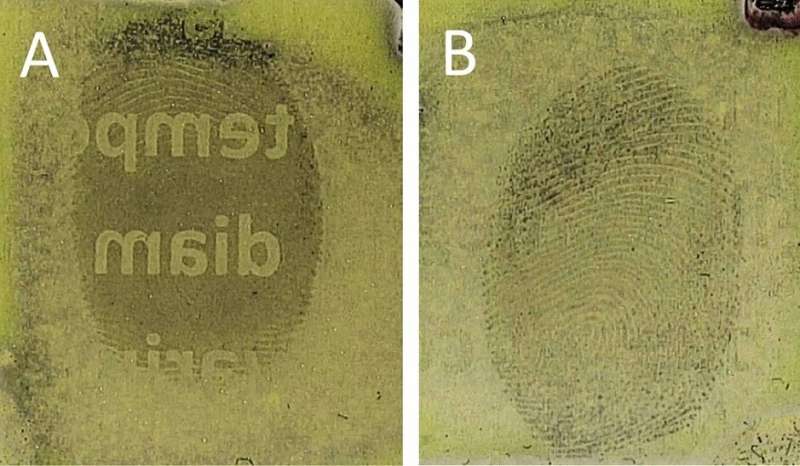 The fingerprint will then appear either masked (A) if put down before the text was printed on the paper or complete (B) if put down after the text had been printed. Credit: Loughborough University

Forensic examiners can now determine whether a fingerprint was placed on a piece of paper before or after any text was printed on it.

The revolutionary technique could help resolve cases of fraud, for example where the defendant claims to have no knowledge of the document but does admit to handling the sheet of paper it was printed on whilst it was blank.

“Let’s say a document was found with your fingerprint on it,” said Professor Paul Kelly, of Loughborough University. “You could say that it’s there because you loaded the paper, but later someone actually printed off the document.

“Normal development techniques just reveal the presence of fingerprints, however, this one allows us to show that you touched the document after the text had been printed.

“Of course, depending on the case, this could be good or bad for the defendant.”

He said it is easy to carry out and uses common forensic tools—gelatin lifters are a standard tool of crime scene investigators.

The process works by placing a thin layer of gelatin over any fingerprint that overlaps with printed text.

The gelatin is then peeled away and placed inside a sealed vacuum chamber and filled with disulfur dinitride vapor, which reacts with the sample.

The fingerprint will then appear either masked (A—in the image) if put down before the text was printed on the paper or complete (B) if put down after the text had been printed.

One perk of the technique, added Prof Kelly, is that it does not destroy the fingerprint, or the document, meaning they could be used for further forensic testing if needed.

“A key feature is the ease of collection of the information—simple application and peeling off a gelatin pad—and the fact it’s non-invasive.

“So, documents or artifacts that are rare or expensive or historically significant could be tested without causing any damage.”

The technique was developed at Foster+Freeman’s labs based at Loughborough’s world-class science and enterprise park, LUSEP. Both Dr. Beth McMurchie and Dr. Richard Wilson, who run the labs, are also former Ph.D. students of Prof Kelly’s.

He said, “It shows the value of partnerships based at LUSEP as all the authors came through our group at Loughborough and the work was completed at Foster+Freeman’s satellite site on campus.

“It’s an excellent example of how Ph.D. training, and the maintaining of close links via LUSEP, can benefit everyone and produce cutting edge results.”

In the past, Loughborough University has worked with Dr. King and Foster+Freeman to create technology that makes it impossible for criminals to destroy their fingerprints.

Read the full paper, “A preliminary investigation of a two-step, non-invasive process to determine chronological deposition order of fingerprints and printed ink on paper,” online in the journal Scientific Reports.

Chemists create framework for the oxidation of hydrocarbons