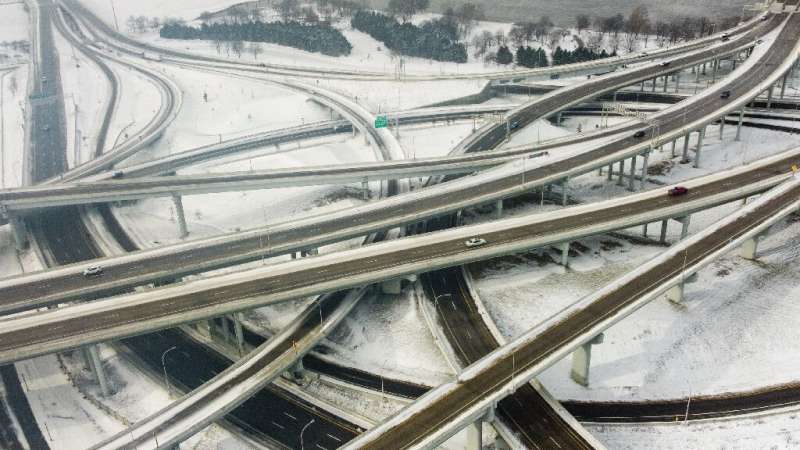 Drivers make their way along a snowy highway in Louisville, Kentucky, which was hit by freezing temperatures on December 23, 2022.

A brutal winter storm that brought Christmas chaos to millions of Americans will be slow to dissipate, the US National Weather Service said Monday, after intense snow and frigid cold caused power outages, travel delays and at least 32 deaths across the eastern part of the country.

“Much of the eastern United States will remain in a deep freeze through Monday before a moderating trend sets in on Tuesday,” the NWS said in its latest advisory.

In Buffalo, western New York, a blizzard left the city marooned, with emergency services unable to reach the worst-hit areas.

“It is (like) going to a war zone, and the vehicles along the sides of the roads are shocking,” said New York Governor Kathy Hochul, a native Buffalo, where eight-foot (2.4-meter) snow drifts and power outages made for life-threatening conditions.

Hochul told reporters Sunday evening that residents were still in the throes of a “very dangerous life-threatening situation” and warned anyone in the area to remain indoors.

More than 200,000 people across several eastern states woke up without power on Christmas morning and many more had their holiday travel plans upended, although the five-day-long storm featuring blizzard conditions and ferocious winds showed signs of easing.

The extreme weather sent wind chill temperatures in all 48 contiguous US states below freezing over the weekend, stranded holiday travelers with thousands of flights canceled and trapped residents in ice- and snow-encrusted homes. 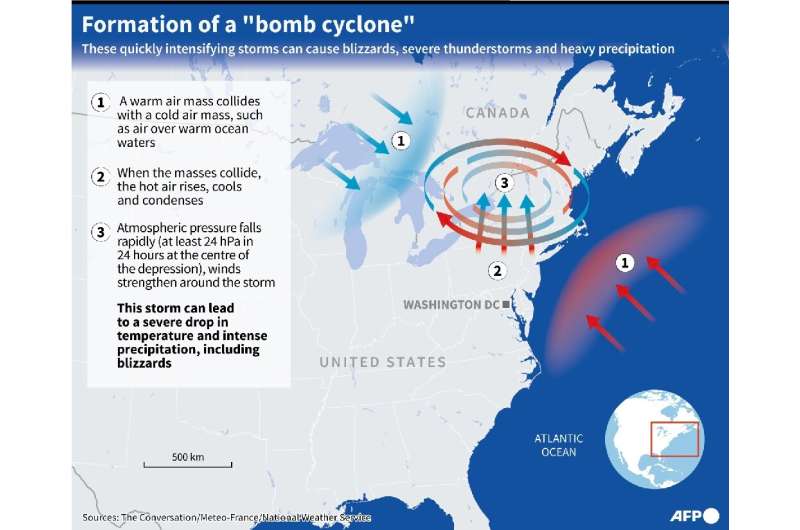 Explainer showing the formation of a bomb cyclone: an intense storm with a low-pressure center which can cause blizzards, severe thunderstorms and heavy precipitation.

Thirty-two weather-related deaths have been confirmed across nine states, including at least 13 in Erie County where Buffalo is located, with officials warning the number is sure to rise.

Officials described historically dangerous conditions in the snow-prone Buffalo region, with hours-long whiteouts and bodies discovered in vehicles and under snow banks as emergency workers struggled to search for those in need of rescue.

The city’s international airport remains closed until Tuesday and a driving ban remained in effect for all of Erie County.

“We now have what’ll be talked about not just today but for generations (as) the blizzard of ’22,” Hochul said, adding that the brutality had surpassed the region’s prior landmark snowstorm of 1977 in the “intensity, the longevity, the ferocity of the winds.”

Due to frozen electric substations, some residents were not expected to regain power until Tuesday, with one substation reportedly buried under 18 feet of snow, a senior county official said. 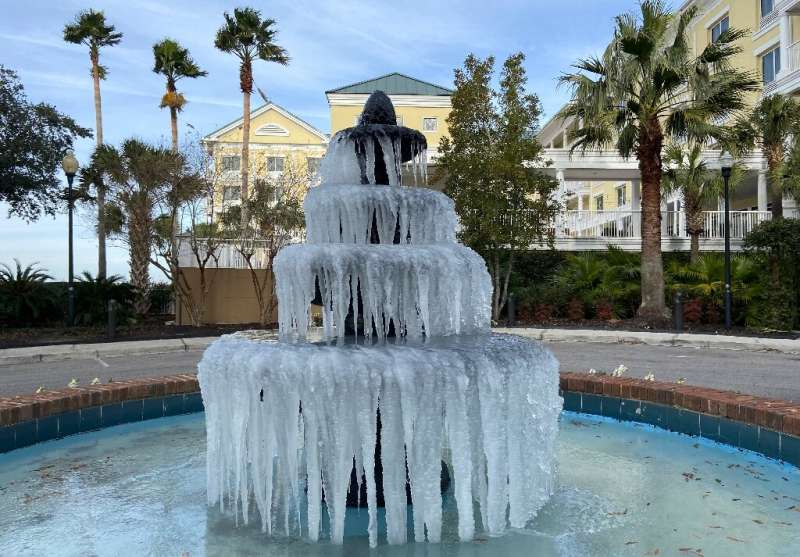 Ice adorns a fountain in Charleston, South Carolina, on December 24, 2022, as a deadly winter storm blanketed much of the United States with frigid temperatures, fierce winds and blinding snow.

‘Conditions are just so bad’

The NWS earlier warned that blizzard conditions in western New York’s Great Lakes region had continued into Sunday, with “additional snow accumulations of 2 to 3 feet through (Sunday night).”

One couple in Buffalo, across the border from Canada, told AFP Saturday that with the roads completely impassible they would not be making a 10-minute drive to see their family for Christmas.

“It’s tough because the conditions are just so bad… a lot of fire departments aren’t even sending out trucks for calls,” said 40-year-old Rebecca Bortolin.

The storm forced the cancellation of nearly 3,000 US flights on Sunday, in addition to some 3,500 scrapped Saturday and nearly 6,000 Friday, according to tracking website Flightaware.com.

More than 1,000 US flights had already been canceled just hours into Monday, the website reported. 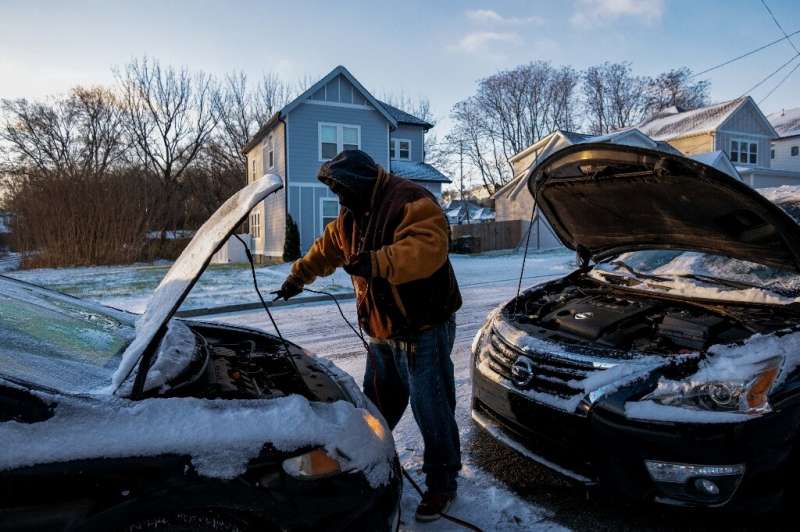 Antonio Smothers jump-starts his vehicle as a major winter storm moves through Nashville, Tennessee on December 23, 2022.

Travelers remained stranded or delayed at airports throughout Christmas Day including at major hubs in Atlanta, Chicago, Denver, Detroit and New York.

Road ice and white-out conditions also led to the temporary closure of some of the nation’s busiest transport routes, including the cross-country Interstate 70.

Drivers were being warned not to take to the roads—even as the nation reached what is usually its busiest time of year for travel.

The extreme weather has severely taxed electricity grids, with multiple power providers urging millions of people to reduce usage to minimize rolling blackouts in places like North Carolina and Tennessee.

At one point on Saturday, nearly 1.7 million customers were without electricity in the biting cold, according to tracker poweroutage.us. 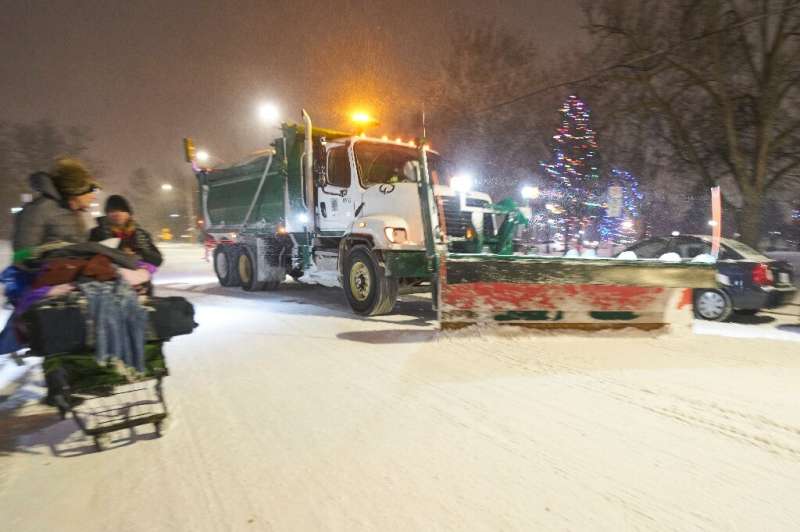 A snowplow clears a road on December 23, 2022, in London, Ontario in Canada during the severe winter storm that battered North America ahead of Christmas day.

The fierce winter conditions are also taking a toll in Canada.

A weekend bus rollover in British Columbia that was believed to be caused by icy roads left four people dead and sent 53 to the hospital, including two still in critical condition early Sunday.

Hundreds of thousands were left without power in Ontario and Quebec, many flights were canceled in major cities and train passenger service between Toronto and Ottawa was suspended.