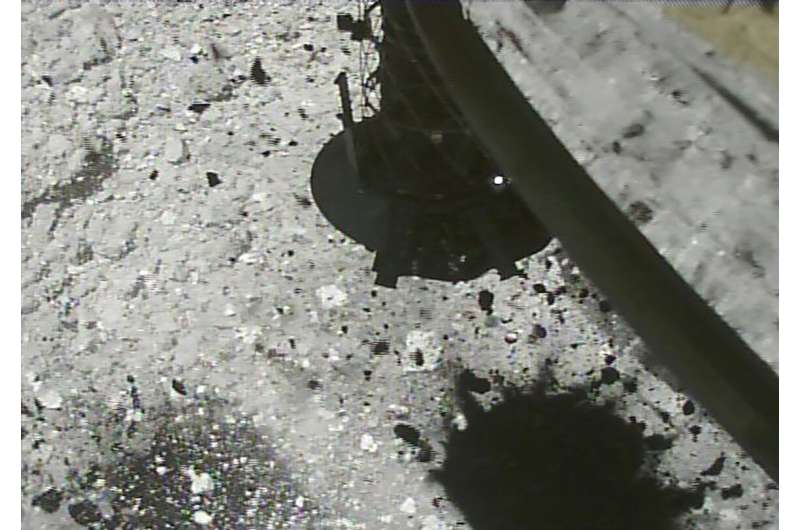 Since return mission Hayabusa2 brought samples of asteroid Ryugu back to Earth in 2020, a team of experts from across the world have been examining them to learn more about the origins of our solar system.

Carbonaceous chondrites, such as the Winchcombe meteorite which fell to Earth and was retrieved in Gloucestershire in 2021, are an extremely rare group of meteorites which have been known to contain organics and amino acids—ingredients for life. They are the most primitive and pristine materials of the solar system and can provide unique information on where water and the building blocks of life were formed, and what planets are made from.

In this study, published Oct. 20 in the journal Science Advances, the team conclude that Ryugu, now a near-Earth object, was among the group of asteroids known as the Cb-type which formed billions of kilometers away from Earth, toward the edge of the sun’s influence, in a region of space such as the Kuiper Belt, or perhaps even deeper into space.

Professor Sara Russell, A senior research lead at the museum who co-authored the paper, says, “It’s only within the last decade we’ve begun to appreciate just how far objects in the solar system can move towards, and away from, the sun.”

“While there is general acceptance that material from the outer solar system could have been moved inwards by the giant planets, this is one of the first studies which suggests the asteroid belt contains material originating as far out as Neptune. This adds an extra layer of detail to our knowledge of how the solar system formed.”

The group set out to investigate whether Cb-type asteroids, such as Ryugu, could be the parent body of a rare group of meteorites known as CI chondrites. Meteorites are key to helping us understand the solar system, however their scientific value is restricted if their formation location is not known. By determining where they originated from, their potential to answer some of the biggest questions asked by scientific community is maximized.

The findings suggest that both Ryugu and the CI chondrites originate from the same region of space, and it can’t rule out that they could even share the same parent body.

Prof. Russell continues, “By comparing the forms of iron in both the asteroids and meteorites, we learnt that Ryugu is a remarkably close match to CI chondrites. These are the rarest type of carbonaceous meteorite, and I’m really excited as the type specimen, Ivuna, is within the museum’s collections.”

“This discovery is very exciting for me as it means that the museum’s meteorite collection is sampling the whole of our solar system,” Sara says. “Along with other types of meteorites, such as the enstatite chondrites from the inner solar system and ordinary chondrites from the asteroid belt, we can study huge swathes of space from here in London.”