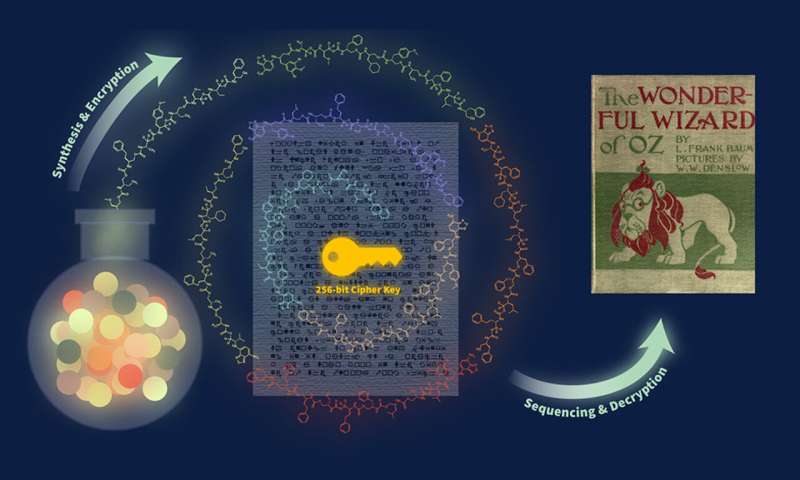 Scientists stored data in the chemical structure of a polymer, mixed it in the ink of a personal letter, mailed it and were able to retrieve a complex encryption key and decrypt a copy of The Wonderful Wizard of Oz. Credit: The University of Texas at Austin

Imagine being able to hide an extremely complex encryption password or detailed financial information for an organization inside the chemical structure of ink. It might sound like something out of a spy movie, but scientists at The University of Texas at Austin and the University of Massachusetts Lowell recently proved it possible.

In a paper out today in the journal ACS Central Science, researchers outlined how they were able to take a 256-bit encryption key and encode it into a plastic-like material they synthesized in the lab, resulting in a new storage medium for encrypting a large data set.

“When it comes to information storage, we’re looking for ways to store data in the smallest amount of space and in a format that is durable and readable,” said Eric Anslyn, a UT Austin chemistry professor and corresponding author on the paper.

To prove their technique for storing data, Anslyn, collaborating with UMass Lowell’s James Reuther and other researchers, encrypted a copy of The Wonderful Wizard of Oz by L. Frank Baum. The 256-bit encryption key is virtually impossible to break by even the fastest computers. It was stored in a material, called a sequence-defined polymer, made up of a long chain of monomers. Each monomer corresponds to one of 16 symbols and, using their newly developed technique, the researchers were able to encode the 256 bits of information to be read in the correct sequence.

A robotic machine in Anslyn’s lab created the polymer material using commercially available amino acids. The finished polymer was mixed into the ink of a personal letter in Texas, mailed to a third party in Massachusetts and then extracted and analyzed using a liquid chromatography mass spectrometer. The analysis revealed the encryption key, which decrypted the book—all on the first try.

Many potential applications exist for storing data in a plastic-like material. As an era of quantum computing approaches, the ability of quantum computers to potentially break standard 8-bit passwords in seconds creates the need for new, more complex encryption methods. The new innovation creates the possibility of having a key hidden in the molecular structure of a note, a key chain, or a necklace.

Meanwhile, with vast amounts of digital data driving the need for data centers that take a toll on the environment and contribute to climate change, new alternatives for data storage are considered critical.

“This is the first time this much information has been stored in a polymer of this type,” Anslyn said, indicating it signaled “a revolutionary scientific advance in the area of molecular data storage and cryptography.”

“Think about it. All of the information required to make a human is stored in one of your cells,” Anslyn said. “And that’s done with four symbols. This has 16 to work with.”