EPFL researchers have discovered that it is not just molecular density, but also pattern and structural rigidity, that control super-selective binding interactions between nanomaterials and protein surfaces. The breakthrough could help optimize existing approaches to virus prevention and cancer detection.

So much of biology comes down to the biophysical process of binding: making a strong connection between one or more groups of atoms—known as ligands—to their corresponding receptor molecule on a surface. A binding event is the first fundamental process that allows a virus to infect a host, or chemotherapy to fight cancer. But binding interactions—at least, our understanding of them—have a “Goldilocks problem”: too few ligands on one molecule makes it impossible for it to stably bind with the correct target, while too many can result in undesirable side-effects.

“When binding is triggered by a threshold density of target receptors, we call this ‘super-selective’ binding, which is key to preventing random interactions that could dysregulate biological function,” explains Maartje Bastings, head of the Programmable Biomaterials Laboratory (PBL) in the School of Engineering. “Since nature typically doesn’t overcomplicate things, we wanted to know the minimum number of binding interactions that would still allow for super-selective binding to occur. We were also interested to know whether the pattern the ligand molecules are arranged in makes a difference in selectivity. As it turns out, it does.”

Bastings and four of her Ph.D. students have recently published a study in the Journal of the American Chemical Society that identifies the optimal ligand number for super-selective binding: six. But they also found, to their excitement, that the arrangement of these ligands—in a line, circle, or triangle, for example—also significantly impacted binding efficacy. They have dubbed the phenomenon “multivalent pattern recognition” or MPR.

“MPR opens up a whole new set of hypotheses around how molecular communication in biological and immunological processes might work. For example, the SARS-CoV-2 virus has a pattern of spike proteins that it uses to bind to cell surfaces, and these patterns could be really critical when it comes to selectivity.”

From coronaviruses to cancer

Because its double helix structure is so precise and well understood, DNA is the perfect model molecule for the PBL’s research. For this study, the team designed a rigid disk made entirely out of DNA, where the position and number of all ligand molecules could be precisely controlled. After engineering a series of ligand-receptor architectures to explore how density, geometry, and nano-spacing influenced binding super-selectivity, the team realized that rigidity was a key factor. “The more flexible, the less precise,” Bastings says.

“Our aim was to carve out design principles in as minimalist a way as possible, so that every ligand molecule participates in the binding interaction. What we now have is a really nice toolbox to further exploit super-selective binding interactions in biological systems.” 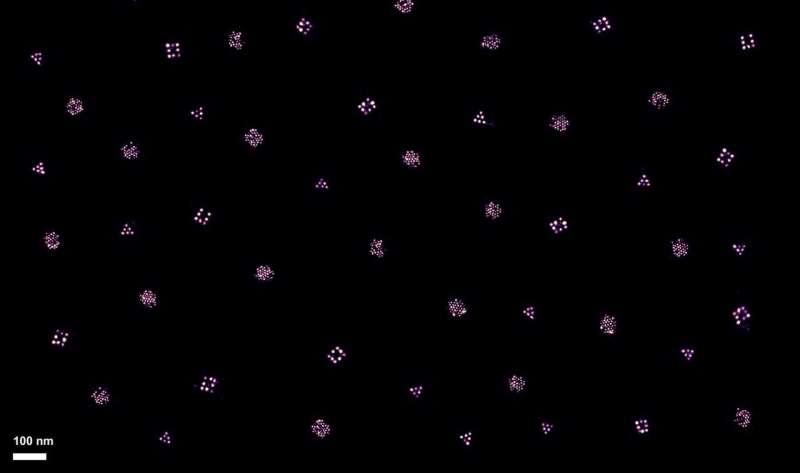 The applications for such a “toolbox” are far-reaching, but Bastings sees three immediately valuable uses. “Like it or not,” she says, “the SARS-CoV-2 virus is currently a first thought when it comes to virological applications. With the insights from our study, one could imagine developing a super-selective particle with ligand patterns designed to bind with the virus to prevent infection, or to block a cell site so that the virus cannot infect it.”

Diagnostics and therapeutics such as chemotherapy could also benefit from super-selectivity, which could allow for more reliable binding with cancer cells, for which certain receptor molecules are known to have a higher density. In this case, healthy cells would remain undetected, drastically reducing side effects.

Finally, such selectivity engineering could offer key insights into complex interactions within the immune system. “Because we can now play precisely with patterns of what happens at binding sites, we can, in a sense, potentially ‘communicate’ with the immune system,” Bastings says.