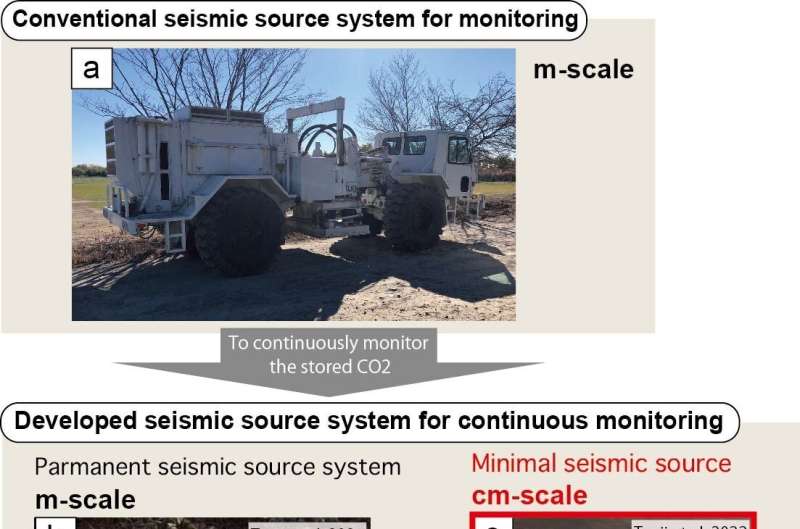 Underground carbon sequestration is a promising approach to fight climate change, yet there are major obstacles to overcome before this technology can be applied on a large scale. A new study from Japan may address one such obstacle by identifying how to continuously and affordably monitor carbon reservoirs to detect leaks or other changes that require attention. The article, “4 cm Portable Active Seismic Source (PASS) for Meter- to Kilometer-Scale Imaging and Monitoring of Subsurface Structures,” was published in Seismological Research Letters

A research group from the Graduate School of Engineering, The University of Tokyo and the International Institute for Carbon-Neutral Energy Research, Kyushu University has developed an ultra-compact, centimeter-scale seismic source that can address this problem by allowing continuous monitoring of carbon reservoirs. Originally, the Portable Active Seismic Source (PASS) was designed for extraterrestrial uses, such as geophysical research on the moon and Mars. However, there are many potential Earth-based applications for the PASS as well.

As lead author and WPI Principal Investigator Professor Takeshi Tsuji explains, “Because of the device’s small size, the vibrations it produces are relatively weak, but when these vibrations are produced continuously, the resulting signals can be stacked together, allowing transmission over long distances. With a four-centimeter motor, the signal could be transmitted one kilometer—the scale needed for monitoring strata used to store carbon dioxide.”

Its small size makes deploying and operating the PASS much more affordable than conventional seismic sources, which are typically several meters in size. The ultra-compact device can be powered by a 12-volt car battery, and can even be deployed by drone in areas that are otherwise inaccessible.

The researchers tested the PASS at two field sites, one on a riverbank and one on a tailings embankment in a mining area. According to Professor Tsuji, “The PASS system has great potential for a wide variety of scientific and engineering applications, including monitoring for potential disasters such as landslides and volcanoes, and imaging man-made structures such as tunnels, dams, and embankments.”

The affordability and practicality of continuous subsurface monitoring using this newly developed PASS technology, allowing detection of sudden changes in reservoirs that could lead to CO2 leakage, make it particularly valuable for the development of carbon sequestration projects. This enhancement to its safety may also encourage public acceptance of these and other geoengineering projects.