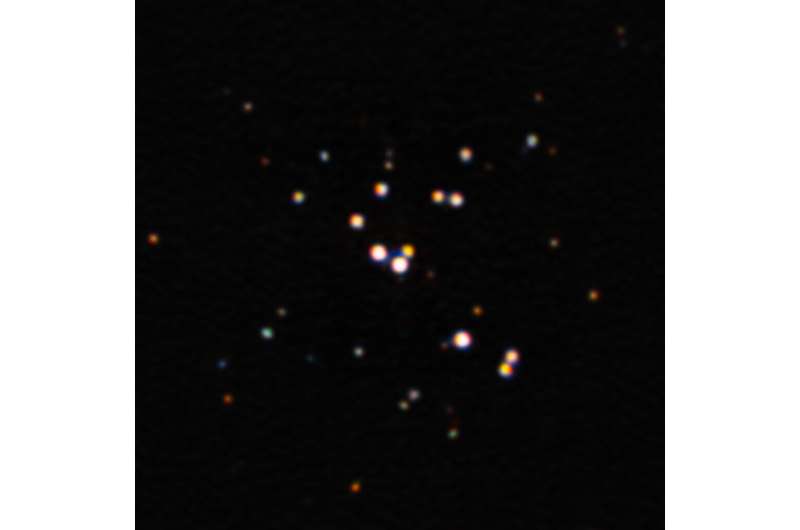 Nestled in the center of the Tarantula Nebula in the Large Magellanic Cloud is the largest star yet discovered. With the help of the Zorro imager and the power of the 8.1-meter Gemini South telescope in Chile, astronomers have produced the sharpest image ever of this star. This new image challenges our understanding of the most massive stars and suggests that they may not be as massive as previously thought. Credit: International Gemini Observatory/NOIRLab/NSF/AURAAcknowledgment: Image processing: T.A. Rector (University of Alaska Anchorage/NSF’s NOIRLab), M. Zamani (NSF’s NOIRLab) & D. de Martin (NSF’s NOIRLab)

By harnessing the capabilities of the 8.1-meter Gemini South telescope in Chile, which is part of the International Gemini Observatory operated by NSF’s NOIRLab, astronomers have obtained the sharpest image ever of the star R136a1, the most massive known star in the universe. Their research, led by NOIRLab astronomer Venu M. Kalari, challenges our understanding of the most massive stars and suggests that they may not be as massive as previously thought.

Astronomers have yet to fully understand how the most massive stars—those more than 100 times the mass of the sun—are formed. One particularly challenging piece of this puzzle is obtaining observations of these giants, which typically dwell in the densely populated hearts of dust-shrouded star clusters. Giant stars also live fast and die young, burning through their fuel reserves in only a few million years. In comparison, our sun is less than halfway through its 10 billion year lifespan. The combination of densely packed stars, relatively short lifetimes, and vast astronomical distances makes distinguishing individual massive stars in clusters a daunting technical challenge.

By pushing the capabilities of the Zorro instrument on the Gemini South telescope of the International Gemini Observatory, operated by NSF’s NOIRLab, astronomers have obtained the sharpest-ever image of R136a1—the most massive known star. This colossal star is a member of the R136 star cluster, which lies about 160,000 light-years from Earth in the center of the Tarantula Nebula in the Large Magellanic Cloud, a dwarf companion galaxy of the Milky Way. 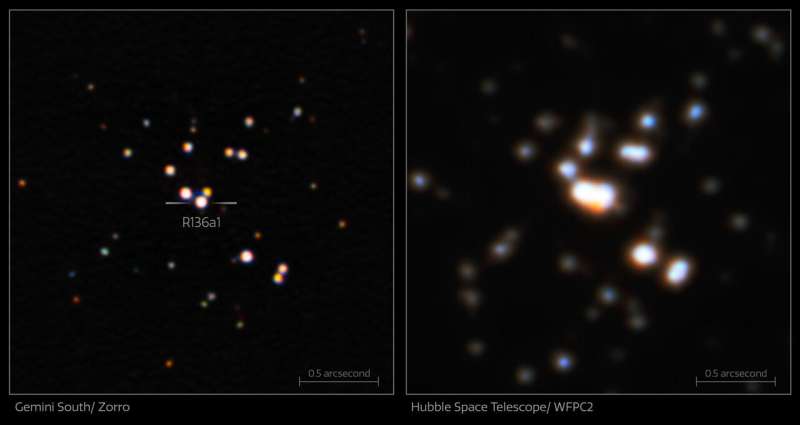 Astronomers are able to estimate a star’s mass by comparing its observed brightness and temperature with theoretical predictions. The sharper Zorro image allowed NSF’s NOIRLab astronomer Venu M. Kalari and his colleagues to more accurately separated the brightness of R136a1 from its nearby stellar companions, which led to a lower estimate of its brightness and therefore its mass.

“Our results show us that the most massive star we currently know is not as massive as we had previously thought,” explained Kalari, lead author of the paper published in The Astrophysical Journal. “This suggests that the upper limit on stellar masses may also be smaller than previously thought.”

This result also has implications for the origin of elements heavier than helium in the universe. These elements are created during the cataclysmically explosive death of stars more than 150 times the mass of the sun in events that astronomers refer to as pair-instability supernovae. If R136a1 is less massive than previously thought, the same could be true of other massive stars and consequently pair instability supernovae may be rarer than expected.

The star cluster hosting R136a1 has previously been observed by astronomers using the NASA/ESA Hubble Space Telescope and a variety of ground-based telescopes, but none of these telescopes could obtain images sharp enough to pick out all the individual stellar members of the nearby cluster. 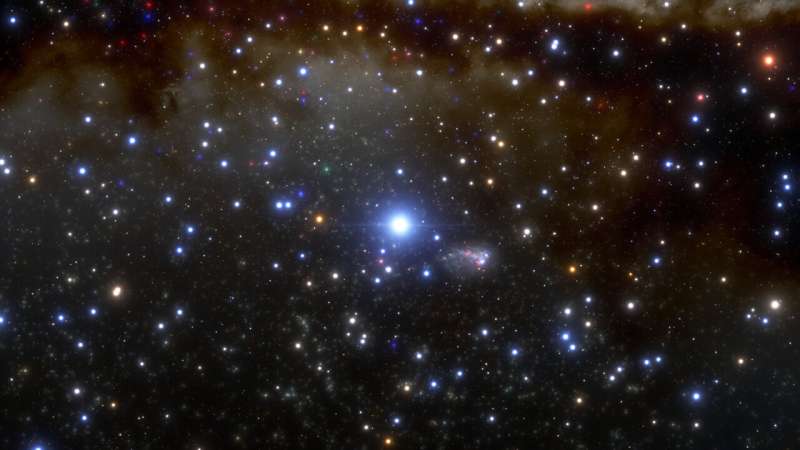 This is an illustration of R136a1, the largest known star in the Universe, which resides inside the Tarantula Nebula in the Large Magellanic Cloud. By harnessing the capabilities of the 8.1-meter Gemini South telescope in Chile, a team of astronomers has obtained the sharpest image ever of this colossal star. Credit: NOIRLab/NSF/AURA/J. da Silva/Spaceengine

Gemini South’s Zorro instrument was able to surpass the resolution of previous observations by using a technique known as speckle imaging, which enables ground-based telescopes to overcome much of the blurring effect of Earth’s atmosphere. By taking many thousands of short-exposure images of a bright object and carefully processing the data, it is possible to cancel out almost all this blurring. This approach, as well as the use of adaptive optics, can dramatically increase the resolution of ground-based telescopes, as shown by the team’s sharp new Zorro observations of R136a1.

“This result shows that given the right conditions an 8.1-meter telescope pushed to its limits can rival not only the Hubble Space Telescope when it comes to angular resolution, but also the James Webb Space Telescope,” commented Ricardo Salinas, a co-author of this paper and the instrument scientist for Zorro. “This observation pushes the boundary of what is considered possible using speckle imaging.”

“We began this work as an exploratory observation to see how well Zorro could observe this type of object,” said Kalari. “While we urge caution when interpreting our results, our observations indicate that the most massive stars may not be as massive as once thought.”

Zorro and its twin instrument ‘Alopeke are identical imagers mounted on the Gemini South and Gemini North telescopes, respectively. Their names are the Hawaiian and Spanish words for “fox” and represent the telescopes’ respective locations on Maunakea in Hawai’i and on Cerro Pachón in Chile. These instruments are part of the Gemini Observatory’s Visiting Instrument Program, which enables new science by accommodating innovative instruments and enabling exciting research. Steve B. Howell, current chair of the Gemini Observatory Board and senior research scientist at the NASA Ames Research Center in Mountain View, California, is the principal investigator on both instruments.

“Gemini South continues to enhance our understanding of the universe, transforming astronomy as we know it. This discovery is yet another example of the scientific feats we can accomplish when we combine international collaboration, world-class infrastructure, and a stellar team,” said NSF Gemini Program Officer Martin Still.