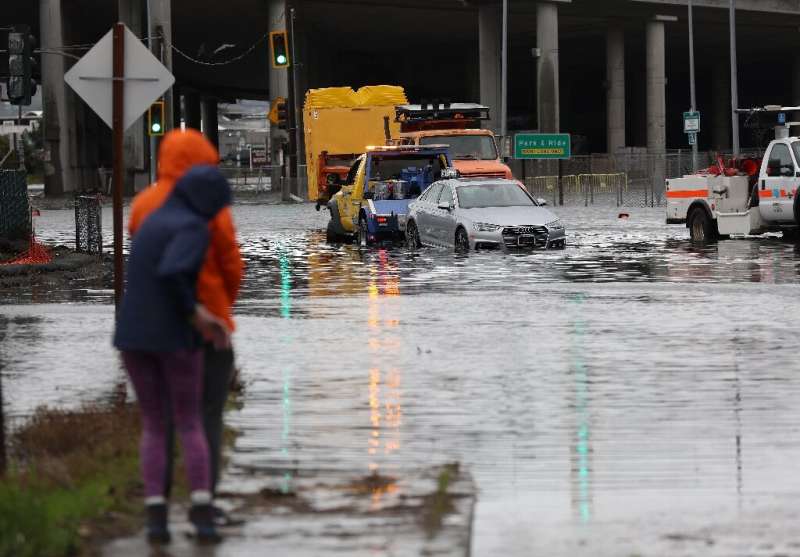 A tow truck pulls a car out of a flooded intersection on January 4, 2023 in Mill Valley, California.

Excessive rain, heavy snow and landslides are expected to wallop California through Thursday as a series of winter storms rip across the western US coast, prompting the Golden State’s governor to declare a state of emergency.

The incoming system is set to deliver yet more rain to already-saturated California, where the National Weather Service (NWS) is warning of coastal flash flooding and mudslides in wildfire-scarred terrain.

The most populous US state has been lashed by atmospheric rivers—where moisture-laden air is drawn in from the oceans—which have brought gusty winds to San Francisco, flooding to Sacramento county and snow to the Sierra Nevadas.

Governor Gavin Newsom declared a statewide emergency on Wednesday and authorized the National Guard to support the disaster response. Local authorities have issued ominous warnings of threats to life and property for a vast stretch of California, focused around San Francisco and Sacramento.

More than 34 million Californians were under a flood watch while the Bay Area National Weather Service told people early Thursday not to travel if they did not need to.

In South San Francisco, a gas station canopy collapsed during the storm.

Dozens of flights were cancelled, some schools preemptively scrapped class and around 190,000 customers across the state were without power as of early Thursday, according to the PowerOutage.us website.

Thousands of sandbags were distributed to residents fearful of flooding. 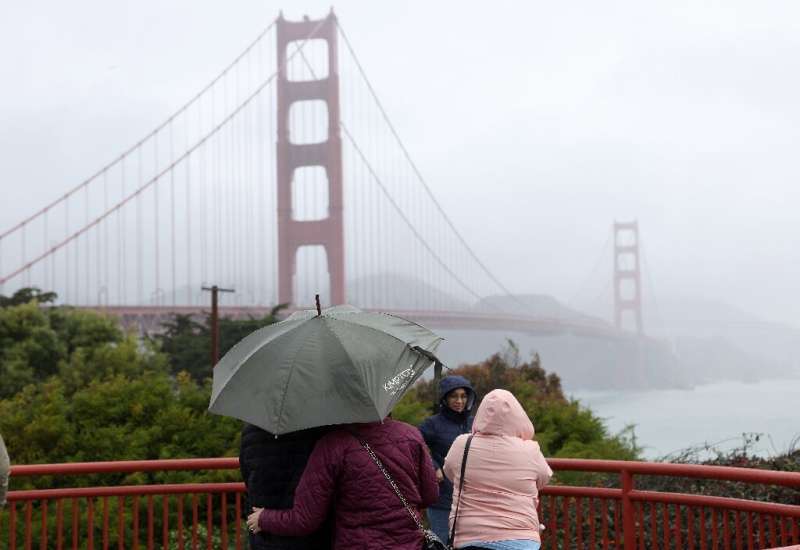 People visit the Golden Gate Bridge as a rain storm moves through the San Francisco area on January 04, 2023.

“(I) just spent all day putting sandbags in front of the garage at every entering point and we’re just crossing our fingers and hoping we won’t have more damage.”

City officials said they were working around the clock.

“We’ve been working very hard to source sandbags from wherever we can in northern California,” said Rachel Gordon, of the city’s public works department.

But she warned that residents needed to take the storms seriously.

“If you don’t have to be out in San Francisco, please don’t be out on the roads.”

The storms come after near-record rainfall over recent weeks.

On New Year’s Eve, parts of northern California were lashed by a storm that caused landslides and power outages, as levees were breached and roadways were flooded.

At least one person is known to have died after being trapped in a submerged car.

The waterlogging caused by those previous storms would exacerbate the danger of this one, meteorologist Matt Solum told AFP. 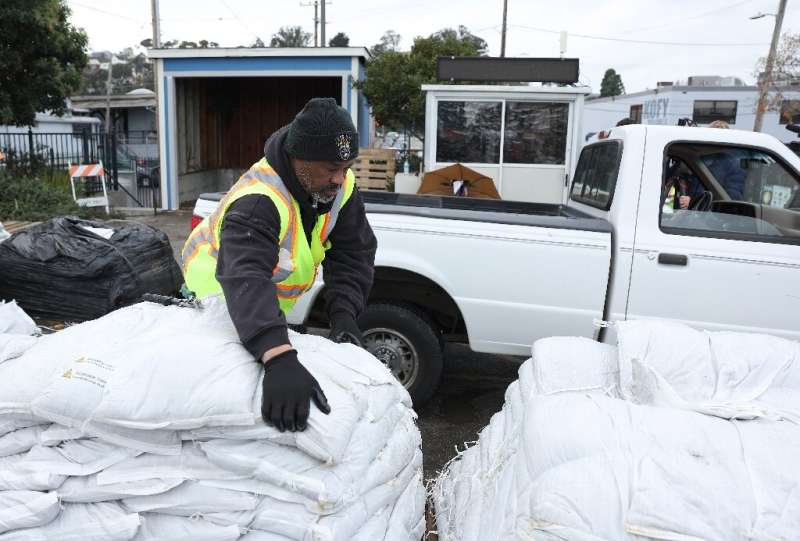 A San Francisco Public Works employee loads sandbags onto a truck on January 03, 2023.

“This storm alone without the previous storms would cause localized flooding concerns and rock slides and mudslide concerns,” he said.

“But with the recent wet conditions, a lot of the rainfall that’s already fallen has already saturated the ground so any additional rainfall is going to run off instead of soak into the ground.”

While it is difficult to draw a straight line to this storm from human-caused climate change, scientists say a warmer planet brings more unstable weather, with more ferocious storms as well as longer, hotter dry periods.

The western United States is in the grip of a decades-long drought, with below-average precipitation leaving river and reservoir levels worryingly low.

Solum said while any rain was helpful in alleviating the drought—a long-term issue—these back-to-back storms could be destructive because there was nowhere for the water to go.

“It’s just the compounding impact of all the storms is what’s going to be the most impactful,” he said.

“Typically, we don’t see this many series of storms with this much heavy rain.”

And there is more to come.

“We are expecting another one over the weekend. And then another several storms potentially for next week. And even possibly the following week as well.”

Mekong Delta will continue to be at risk for severe flooding, study finds