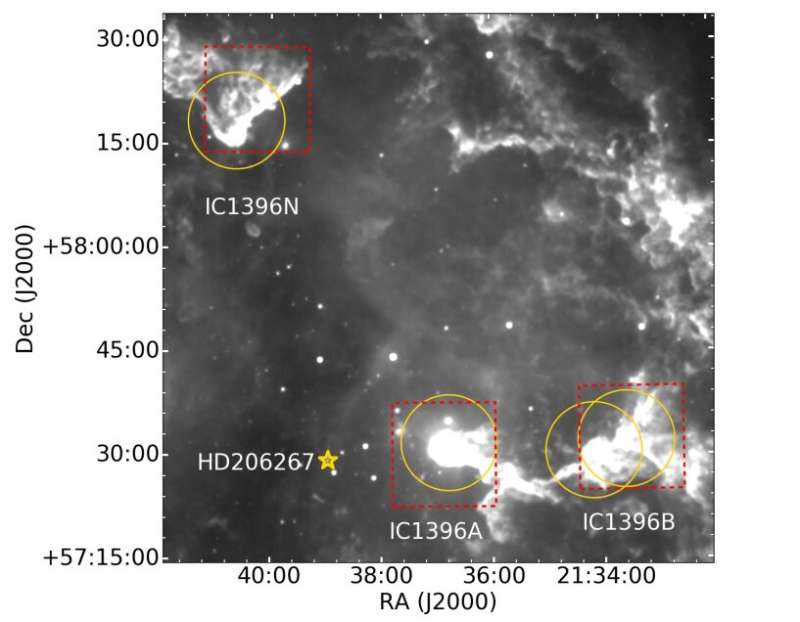 Using various telescopes, an international team of astronomers has investigated IC 1396—a nearby region of ionized atomic hydrogen. Results of the study, published October 21 on arXiv.org, yield important insights regarding the star formation history and structure of this region.

Star-forming regions are essential for astronomers to better understand the processes of star formation and stellar evolution. Observations of such regions have the potential to expand the list of known stars, protostars, young stellar objects and clumps, which could then be studied comprehensively in various wavelengths in order to get more insights into initial stages of the stellar life cycle.

Located most likely between 2,830 and 3,080 light years away in the star-forming Cepheus bubble, IC 1396 is an HII star-forming region as it contains clouds of ionized atomic hydrogen. The region has a rather simple structure and is powered by the multiple O star system HD 206267 residing near the geometrical center of IC 1396 in the young cluster Trumpler 37.

Previous observations of IC 1396 have found that it also contains some bright-rimmed clouds (BRCs) shaped by the ultraviolet radiation from HD 206267. These clouds present evidence of ongoing star formation and are perceived by astronomers as excellent laboratories for studying young stars in different evolutionary stages.

Therefore, a group of researchers led by Mara E. Pelayo-Baldárrago of the Autonomous University of Madrid in Spain, inspected IC 1396 and its BRCs using multiwavelength data from various instruments.

“We use ground-based spectroscopy, photometry, and Gaia EDR3 data to study star formation in IC 1396. We obtained near-infrared broad- and narrow-band imaging to study the star-cloud interaction and optical spectra to confirm and classify objects that were young star candidates,” the astronomers wrote in the paper.

The study found that the IC 1396 region contains four independent subclusters (designated A, B, E, F), significantly different in proper motion but not in parallax. This finding, together with the spatial distribution of member stars, suggests a complex and varied star formation process in IC 1396.

Further investigation of the four subclusters found that they differ also in age. It turned out that the populations in the outskirts of subclusters B and E are older (on average) than those in subcluster A.

The study also determined that the distance to IC 1396 is approximately 3,015 light years and identified 334 new members of this region. The color-magnitude diagrams indicate that most of these new members are intermediate- to solar-mass stars. The mean age of IC 1396 was estimated to be about 4 million years.

Summing up the results, the authors of the paper underlined that they altogether point to a multi-episodic star formation process in IC 1396.

“The kinematics, age, and evolutionary state differences in groups of sources within the same cloud suggest that IC1396 has suffered more than one-star formation episode over time from various mechanisms, although radial velocity differences mean that triggering is not obvious,” they concluded.