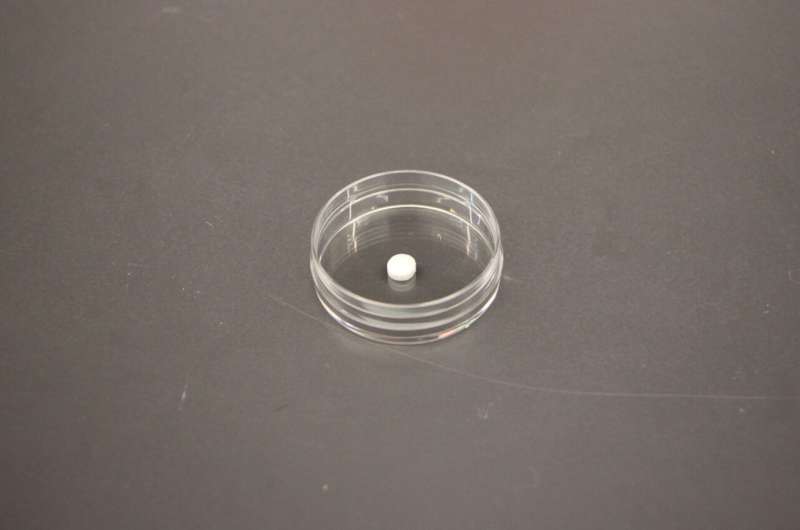 The small tablet can be placed under the tongue where it immediately dissolves and delivers the vaccine into the body. Credit: Duke University

Biomedical engineers at Duke University have developed a tablet-based vaccine for urinary tract infections (UTIs) that rapidly dissolves when placed under the tongue. The new treatment could offer an easy and practical alternative to high-dose, oral antibiotics which are the current standard for UTI treatments.

The results appeared online November 23 in the journal Science Advances.

Urinary tract infections occur when bacteria infect the urethra, bladder, ureters or kidneys. More than half of all women experience a UTI, and they pose a significant risk for patients who require a catheter. While UTIs often cause pain and discomfort, organ damage and even sepsis can also occur if the infection reaches the kidneys.

The small tablet containing a protective vaccine for UTIs immediately dissolves when placed in a liquid. Credit: Duke University

To address this issue, a team of collaborators including Joel Collier, the Theodore Kenney Professor of Biomedical Engineering at Duke, and Sean Kelly, who completed this work as a Ph.D. student in the Collier lab, developed a vaccine that can be absorbed under the tongue and activates key immune cells to precisely attack UTI-causing bacteria.

“There was previous literature that showed that drugs absorbed through the mucus membrane under the tongue could trigger an immune response, especially in similar mucosal membranes throughout the body,” said Kelly, now a post-doctoral fellow at Johns Hopkins University. “This was important, because one of the challenges for developing a vaccine for UTIs is that you need to trigger an immune response in both the blood and in the urogenital tract, and the intramuscular shots generally do not trigger strong responses in those mucosal areas.”

“Additionally, there are a lot of barriers to easy vaccine delivery. You often need refrigeration, you need trained personnel to administer the shot, and you need materials like needles,” Kelly said. “But the tablet delivery method offers a solution to a lot of these problems. It can be stored at room temperature without any issues. The hope is that a patient could pop it out of a package, put it under their tongue and in a few seconds, it’s gone, and the patient can go on with their day.”

Getting past the membrane layer under the tongue is tricky, as mucus was made to prevent large molecules, viruses, and other materials from entering the body. But the Collier lab specializes in developing biomaterials that self-organize into useful structures like nanoparticles, nanofibers, and gels, which can be customized to activate key cells in the immune system. The team found that they could add mucus-resistant modifications to these structures that allows them to easily slip through the mucosal layer.

After finalizing the sugars and other structural components needed in a quickly dissolving, vaccine-delivering tablet, the team began exploring how to specifically target UTI-causing bacteria.

“Sean identified certain proteins that appeared frequently in a type of bacteria called uropathogenic E. coli, which causes most UTIs,” said Collier. “That gave us a clear target for the immune cells to attack.”

The team wove the E. coli proteins into their mucus-penetrating nanofibers. Once this structure is absorbed, the incorporated bacterial proteins activate immune cells, giving them specific instructions to kill the bacteria in both the blood and urogenital tract.

“The efficacy of the tablet-delivered vaccine was comparable to antibiotics, and we have found that antibody responses raised by the nanofiber materials can be very durable, lasting for the lifetime of a mouse, so we are hopeful that protection from UTIs will be equally long-lasting,” said Collier. “Sean and the team also conducted microbiome analyses, and they found that there was significantly less disruption to the gut microbiome of the mice models than what we see with antibiotics.”

The team will continue to refine their model, as Collier and his collaborators are curious if the vaccine can be used to minimize or even prevent UTI recurrence. They also plan to explore additional disease models where the sublingual vaccine delivery mechanism could be especially useful. Many of these diseases, including gonorrhea and chlamydia, also involve the urogenital tract and face issues with antibiotic resistance.

Although the team was excited about the results for long-term UTI protection, they are also optimistic for the new possibilities available with the sublingual vaccine tablet.

“Especially after COVID, it is becoming clear that vaccines are increasingly going to be part of our lives, so we need more accessible vaccinations that can be repeated easily,” said Collier.

“Current vaccines, with their dependence on continuous refrigeration, require substantial infrastructure that is not available in vast parts of the world. The tablet technology can be much more equitably delivered because it avoids this dependence on refrigeration,” Collier said. “If we are successful, anyone could receive the vaccine, whether they’re close to a large hospital system or not. We’re a ways off from that reality, but we continue to work in that direction.”