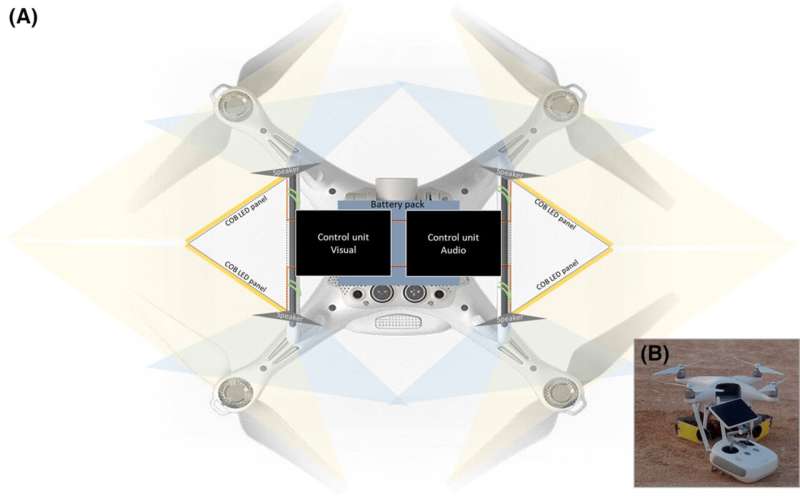 The deterrent. (A) Bottom view, schematic depiction: The elements are connected to plastic struts and fastened to the drone’s landing gear. Light and sound beams are illustrated for demonstration and are not indicative of actual transmission range. (B) Front view of the deterrent. Credit: Remote Sensing in Ecology and Conservation (2022). DOI: 10.1002/rse2.316

A new study by Tel Aviv University and the University of Haifa offers an original solution to the biological challenge of wind turbine operation and helps prevent harm caused to flying animals, in particular bats. According to the researchers, every year, wind turbines around the world kill millions of bats and other animals who fly into the turbine’s blades.

The researchers’ new development is a unique drone-mounted technology that transmits a combination of ultrasonic signals and lights. This deters the bats and leads them to fly at a higher altitude, outside the danger zone, thereby allowing the turbines to continue to operate efficiently and continuously.

The article was published in Remote Sensing in Ecology and Conservation.

Prof. Yovel explains, “Wind turbines are considered a promising technology in the field of renewable energy, but their operation involves a variety of biological challenges. Today, the only solution to prevent the death of bats is to stop turbine activity at times when the bats are expected to be particularly active.”

“But such interruptions reduce the turbines’ efficiency and the amount of energy they can produce. The advantage of the drone is that it is in constant motion and transmits a combination of visual and acoustic signals designed specifically for bats, warning them of danger. When signals are stationary and constant, animals tend to get used to them and eventually ignore them.”

Yuval Werber says, “The study, which is part of my doctoral thesis, was conducted in the Hula Valley, an area with a lot of bat activity. We operated the drone at a height of 100 meters—the average height of the center of a wind turbine, and in motion along a path of about 100 meters, back and forth.”

“To track the bats’ activity, we used RADAR located on the ground, which allowed for tracking at a height of 100 meters and above, and we added a LIDAR device—a laser-based tool that is used to detect objects at short distances, mainly in the automotive industry—for tracking at a lower height. At the same time, we made acoustic recordings of the bats in flight, using receivers placed at three different heights: one meter, 150 meters, and 300 meters. We used a blimp to elevate the receivers. Importantly, our study was the first in the world to combine these technologies—RADAR, LIDAR and high-altitude acoustic recorders—to track bats.”

Using a variety of monitoring methods, the researchers compared the bats’ normal activity with their activity in the presence of the drone carrying the deterrent device. The findings were unequivocal—the device succeeded in keeping the bats away. With the drone’s presence, the bats’ activity underneath it decreased by about 40 percent, at a distance of up to about 400 meters. On the other hand, their activity increased above the drone’s altitude of 100 meters, up to 800 meters.

“It appears that the device is effective in repelling bats from its immediate environment—the bats sense the visual and ultrasonic signals it emits and choose to fly over it, as we had hoped,” says Prof. Yovel.

“We hypothesize that if the device is activated near a turbine, it will lead the bats to fly over the turbine and out of harm’s way. This is an effective and easily-implemented solution that is reasonably priced, with great benefit to all parties: on the one hand, it prevents the killing of bats, and on the other hand, it enables the operation of the turbine and the production of green energy in a safe, continuous and efficient manner. We intend to carry out a follow-up experiment on a wind turbine site, in order to test the efficiency of the device under these conditions.”