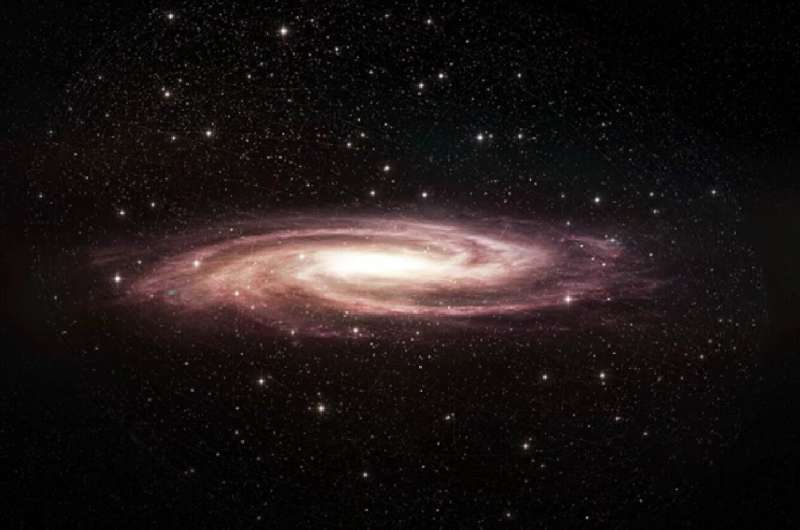 A new study has revealed the true shape of the diffuse cloud of stars surrounding the disk of our galaxy. For decades, astronomers have thought that this cloud of stars—called the stellar halo—was largely spherical, like a beach ball. Now a new model based on modern observations shows the stellar halo is oblong and tilted, much like a football that has just been kicked.

The findings—published this month The Astronomical Journal — offer insights into a host of astrophysical subject areas. The results, for example, shed light on the history of our galaxy and galactic evolution, while also offering clues in the ongoing hunt for the mysterious substance known as dark matter.

“The shape of the stellar halo is a very fundamental parameter that we’ve just measured to greater accuracy than was possible before,” says study lead author Jiwon “Jesse” Han, a Ph.D. student at the Center for Astrophysics | Harvard & Smithsonian. “There are a lot of important implications of the stellar halo not being spherical but instead shaped like a football, rugby ball, or zeppelin—take your pick!”

“For decades, the general assumption has been that the stellar halo is more or less spherical and isotropic, or the same in every direction,” adds study co-author Charlie Conroy, Han’s advisor, and a professor of astronomy at Harvard University and the Center for Astrophysics. “We now know that the textbook picture of our galaxy embedded within a spherical volume of stars has to be thrown out.”

Astronomers have discovered that the Milky Way galaxy’s stellar halo—a cloud of diffuse stars around all galaxies—is zeppelin-shaped and tilted. This artist’s illustration emphasizes the shape of the three-dimensional halo surrounding our galaxy. Credit: Melissa Weiss/Center for Astrophysics | Harvard & Smithsonian

The Milky Way’s stellar halo is the visible portion of what is more broadly called the galactic halo. This galactic halo is dominated by invisible dark matter, whose presence is only measurable through the gravity that it exerts. Every galaxy has its own halo of dark matter. These halos serve as a sort of scaffold upon which ordinary, visible matter hangs. In turn, that visible matter forms stars and other observable galactic structure. To better understand how galaxies form and interact, as well as the underlying nature of dark matter, stellar haloes are accordingly valuable astrophysical targets.

Fathoming the shape of the Milky Way’s stellar halo, though, has long challenged astrophysicists for the simple reason that we are embedded within it. The stellar halo extends out several hundred thousand light years above and below the star-filled plane of our galaxy, where our Solar System resides.

“Unlike with external galaxies, where we just look at them and measure their halos,” says Han, “we lack the same sort of aerial, outside perspective of our own galaxy’s halo.”

Complicating matters further, the stellar halo has proven to be quite diffuse, containing only about one percent of the mass of all the galaxy’s stars. Yet over time, astronomers have succeeded in identifying many thousands of stars that populate this halo, which are distinguishable from other Milky Way stars due to their distinctive chemical makeup (gaugeable by studies of their starlight), as well as by their distances and motions across the sky. Through such studies, astronomers have realized that halo stars are not evenly distributed. The goal has since been to study the patterns of over-densities of stars—spatially appearing as bunches and streams—to sort out the ultimate origins of the stellar halo.

The new study by CfA researchers and colleagues leverages two major datasets gathered in recent years that have plumbed the stellar halo as never before.

The first set is from Gaia, a revolutionary spacecraft launched by the European Space Agency in 2013. Gaia has continued compiling the most precise measurements of the positions, motions, and distances of millions of stars in the Milky Way, including some nearby stellar halo stars.

The second dataset is from H3 (Hectochelle in the Halo at High Resolution), a ground-based survey conducted at the MMT, located at the Fred Lawrence Whipple Observatory in Arizona, and a collaboration between the CfA and the University of Arizona. H3 has gathered detailed observations of tens of thousands of stellar halo stars too far away for Gaia to assess.

Combining these data in a flexible model that allowed for the stellar halo shape to emerge from all the observations yielded the decidedly non-spherical halo—and the football shape nicely dovetails with other findings to date. The shape, for example, independently and strongly agrees with a leading theory regarding the formation of the Milky Way’s stellar halo.

According to this framework, the stellar halo formed when a lone dwarf galaxy collided 7-10 billion years ago with our far-larger galaxy. The departed dwarf galaxy is amusingly known as Gaia-Sausage-Enceladus (GSE), where “Gaia” refers to the aforementioned spacecraft, “Sausage” for a pattern appearing when plotting the Gaia data and “Enceladus” for the Greek mythological giant who was buried under a mountain—rather like how GSE was buried in the Milky Way. As a consequence of this galactic collisional event, the dwarf galaxy was ripped apart and its constituent stars strewn out into a dispersed halo. Such an origin story accounts for the stellar halo stars’ inherent unlikeness to stars born and bred in the Milky Way.

The study’s results further chronicle just how GSE and the Milky Way interacted all those eons ago. The football shape—technically called a triaxial ellipsoid—reflects the observations of two pileups of stars in the stellar halo. The pileups ostensibly formed when GSE went through two orbits of the Milky Way. During these orbits, GSE would have slowed down twice at so-called apocenters, or the furthest points in the dwarf galaxy’s orbit of the greater gravitational attractor, the hefty Milky Way; these pauses led to the extra shedding of GSE stars. Meanwhile, the tilt of the stellar halo indicates that GSE encountered the Milky Way at an incident angle and not straight-on.

“The tilt and distribution of stars in the stellar halo provide dramatic confirmation that our galaxy collided with another smaller galaxy 7-10 billion years ago,” says Conroy.

Notably, so much time has passed since the GSE-Milky Way smashup that the stellar halo stars would have been expected to dynamically settle into the classical, long-assumed spherical shape. The fact that they haven’t likely speaks to the broader galactic halo, the team says. This dark matter-dominated structure is itself probably askew, and through its gravity, is likewise keeping the stellar halo off-kilter.

“The tilted stellar halo strongly suggests that the underlying dark matter halo is also tilted,” says Conroy. “A tilt in the dark matter halo could have significant ramifications for our ability to detect dark matter particles in laboratories on Earth.”

Conroy’s latter point alludes to the multiple dark matter detector experiments now running and planned. These detectors could increase their chances of capturing an elusive interaction with dark matter if astrophysicists can adjudge where the substance is more heavily concentrated, galactically speaking. As Earth moves through the Milky Way, it will periodically encounter these regions of dense and higher-velocity dark matter particles, boosting odds of detection.

The discovery of the stellar halo’s most plausible configuration stands to move many astrophysical investigations forward while filling in basic details about our place in the universe.

“These are such an intuitively interesting questions to ask about our galaxy: ‘What does the galaxy look like?’ and ‘What does the stellar halo look like?’,” says Han. “With this line of research and study in particular, we are finally answering those questions.”

Biden to Pelosi: ‘I Hope You Stick’