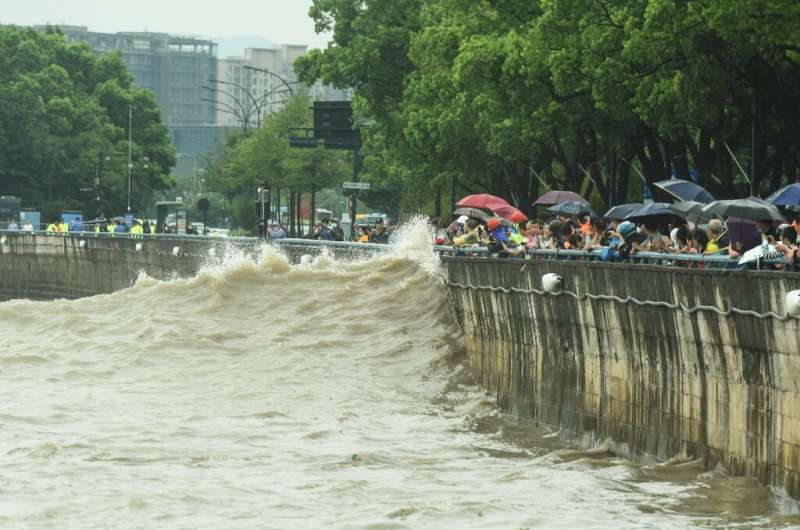 However, there were no immediate reports of any deaths or casualties.

At least 426,000 people were evacuated in Shanghai and another 1.2 million people were taken to temporary shelters in neighbouring Zhejiang province, CCTV added.

Giant waves were seen crashing onto the coastline in Hangzhou bay, to the south of Shanghai, and national radio reported a landslide in Ninghai County in Zhejiang province.

Packing winds of up to 125 kilometres (78 miles) per hour, the storm made landfall at 12:30 am Thursday (1630 GMT Wednesday) in Shanghai’s Fengxian district.

It had earlier led to the cancellation of all flights to China’s biggest financial hub.

Muifa previously hit the city of Zhoushan in Zhejiang on Wednesday, according to state news agency Xinhua.

Air travel slowly resumed in Shanghai as the storm moved north, but most flights from the city’s two main airports were cancelled Thursday morning, according to aviation data provider Flightradar24.

Operations at some of Asia’s largest container shipping ports in Shanghai and neighbouring Ningbo that were halted because of the typhoon were scheduled to resume later Thursday, according to statements from port officials.

Officials ordered all fishing vessels in the Yellow Sea and Bohai Sea to anchor in ports as northeast China braced for the typhoon.

The storm entered east China’s Jiangsu province on Thursday morning and the wind speed weakened to about 90 kilometres (56 miles) per hour, the Central Meteorological Observatory said.

The storm came soon after Typhoon Hinnamnoor hit Shanghai and its neighbouring region last week, causing the suspension of Shanghai ferry services and school closures in parts of Zhejiang.

Muifa is the 12th typhoon to hit China this year, according to state media.

Tropical storms, which are expected to increase as the planet warms, were sharply up in 2021, a report by the US National Oceanic and Atmospheric Administration said earlier this month.