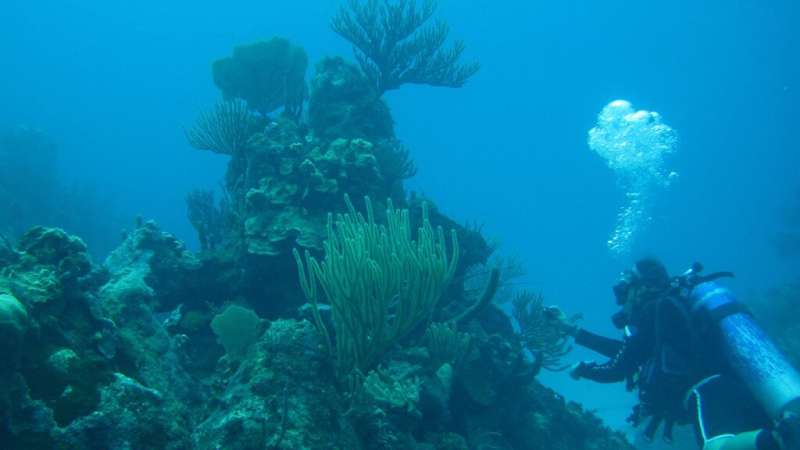 A researcher takes a close look at a coral reef near Little Cayman island in the Caribbean Sea in 2016. Credit: Kristine DeLong, Louisiana State University

The coral reefs of the Gulf of Mexico and the Caribbean are richly diverse ecosystems of global importance. These regions contain more than 10% of the world’s reefs and host hundreds of fish species, and they provide more than $6 billion in economic benefits courtesy of fisheries, tourism, and other ecosystem services. But over the past four decades, climate change and local stressors like overfishing, pollution, and invasive species have taken a heavy toll. On average, live coral covers less than 10% of the surface of most reefs in the region.

Heat stress is a major culprit of this decline. It can cause a phenomenon called coral bleaching, in which corals expel the colorful algae that provide most of their food. If the algae come back, the corals can survive the ordeal. But extended periods of high temperature or back-to-back bleaching events will eventually kill many corals. Since 1987, the Florida Keys alone have been hit by at least six major bleaching events, with several events sweeping the whole region.

In a new study published in Journal of Geophysical Research: Biogeosciences, Lawman et al. use climate model simulations spanning from 2015 to 2100 to evaluate how heat stress and ocean acidification—caused by rising carbon dioxide levels—will affect corals in the Gulf of Mexico and Caribbean. The authors also broke down modeled temperature and acidification rates by region. They found that depending on the simulation, sea surface temperatures in the area increased by about 0.3°C–0.4°C per decade through the 21st century (or 2°C–2.8°C cumulatively by century’s end).

If these estimates prove accurate, ocean temperatures will surpass the bleaching threshold for the region’s corals by midcentury, indicating heat stress will have a more rapid and extreme impact on reefs compared with acidification. However, in some regions, ocean temperatures are projected to change more slowly. The authors suggest that these regions could be prioritized for protection as climate refugia. The findings could also be combined with studies focusing on other coral stressors to create comprehensive regional risk maps to inform better management.

The authors conclude that in the absence of significant and targeted mitigation efforts, stress from higher temperatures and ocean acidification will likely kill many existing corals in the Gulf of Mexico and Caribbean by 2100.

This story is republished courtesy of Eos, hosted by the American Geophysical Union. Read the original story here.

LIV Golf may need a mulligan on Capitol Hill