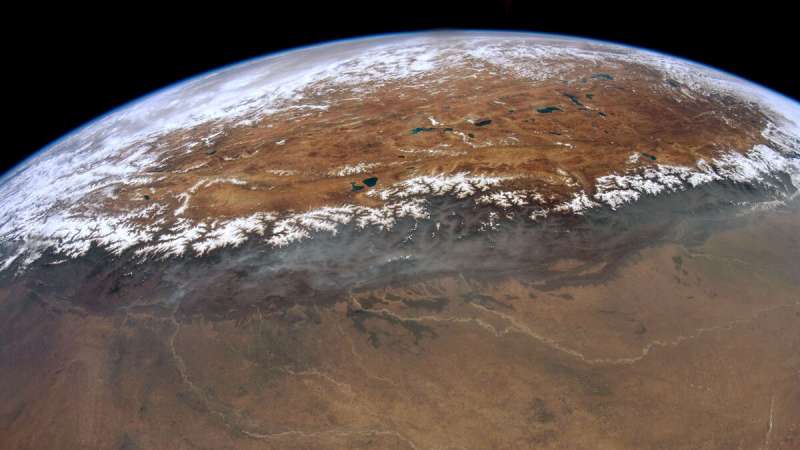 Researchers studied the embayment (visible as the slightly hitched area in the center of this satellite image) of the Himalayas in western Nepal. Credit: NASA, ISS Crew Earth Observations Facility and the Earth Science and Remote Sensing Unit, Johnson Space Center, Public Domain

Despite being deemed a “perfect” arc, the shape of the Himalaya highlands is interrupted by an embayment that stretches across nearly 2° of longitude in western Nepal. This deviation from a perfect shape, plus a few diverging landforms and fault anomalies, casts a shadow on the geologic processes at play in the region. This anomaly also provides an opportunity to investigate how the Himalayan megathrust fault affects the active growth of the mountain range. Additionally, understanding the nature of the megathrust in the western Himalayas is crucial to evaluating seismic hazards in the region.

In a new study published in Tectonics, researchers used thermokinematic modeling to define the geometry and movement of the megathrust in western Nepal. In particular, the researchers compared the thermochronological ages of crystals such as zircon, apatite, and muscovite with age estimations from thermokinematic models that invoke large-scale crustal movements along the megathrust.

Research revealed the 3D geometry and movement of the megathrust. The team found that the cooling ages in western Nepal are best reproduced by a megathrust model with two connected ramps and crustal accretion occurring at mid-lower crustal depths along the northern ramp. They also found that crustal accretion along the mid-lower ramp might have been controlling the frontal edge of the Tibetan plateau in and out of the embayment. In addition, variation in the propagation of the mid-lower ramp may have occurred at least 10 million years ago and could have caused the formation of the embayment in western Nepal.

The team said their work highlights the importance of crustal accretion at different depths when developing a mountain system and helps to determine the location of a plateau edge. They also note that the megathrust evolution and associated deep structural processes may have controlled the evolution of the regional drainage system.

This story is republished courtesy of Eos, hosted by the American Geophysical Union. Read the original story here.