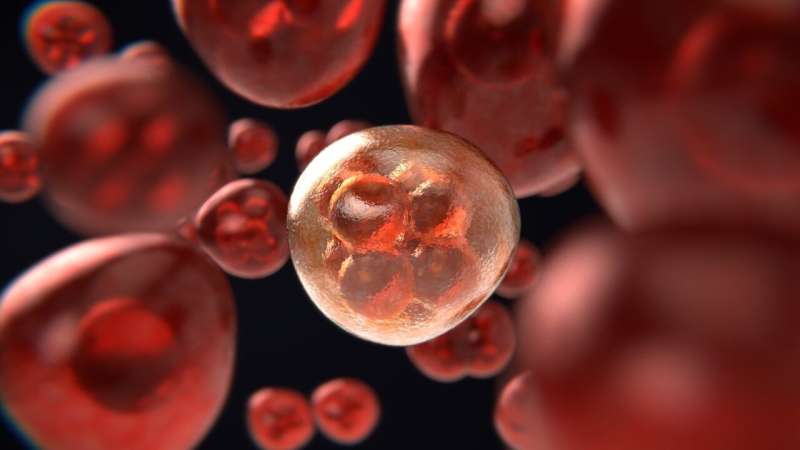 How does an embryonic stem cell decide if it becomes a heart cell or a kidney cell? That’s the question computational biologist Maria Mircea studied for her Ph.D. research. She looked at the inside of individual cells to analyze how they change. This is what she discovered.

“A cell starts just like a child that can become anything they want,” says Mircea. “Through study and career choices, the options narrow down to become a specialized professional. This path is called a trajectory.”

Proteins as employees in a cell

It’s the proteins in a cell that influence branches in this trajectory. “Proteins are like the employees in a company. Each one has a different job to do. The inside of an embryonic cell is like a start-up company: it has to make many changes to its structure and employees until it becomes a well-established firm.” Measuring every single protein would be the ultimate way to understand how a cell changes, but this is not yet possible. Instead, Mircea looked at a different component: ribonucleic acid, or RNA.

She explains, “The DNA contains genes that carry the instructions to create proteins. This information stored in the DNA is passed down to the RNA.” RNA looks like DNA, but with a single spiral instead of a double one. The RNA is then read out by the cell to build the proteins. “Therefore, studying the RNA can also be used to analyze the changes in a cell.”

Mircea developed a computational method to identify cell types using all the RNA data of an individual cell. “This is a big improvement from previous methods that only looked at what a cell looks like or used a small set of proteins.”

This information about cell specialization is useful when making so-called organoid models. These models are a mix of cells cultured in the lab that together mimic a real organ. In collaboration with the LUMC, Mircea studied organoid models of the heart. There is a clear benefit to making realistic organoid models: “They can be very useful to test drugs without interfering with a human or testing on animals.”

She adds that in the future this research could also be used for personalized medicine: “For example, you can take skin cells of a patient and reverse them back into a cell with stem-cell like character. Then you can turn them into any cell type. These cells could be used to test how the patient would respond to certain medication. But we are not quite there yet.”

As one of the few theorists in an experimental group, Mircea also wanted to develop mathematical models to describe how stem cells develop. She clarifies: “I wanted to combine the computational power of neural networks with mechanistic models that describe the biophysical principles of changes that occur in cells. You then have a physics-informed deep neural network that helps us to understand interactions between genes during cell development.”

But the aspect she enjoyed the most during her Ph.D.? “The interactions with biologists. As a mathematician, I really loved working directly with biologists to learn about stem cells and the wet lab.”

Mircea will be defending her thesis, titled “Unravelling cell fate decisions through single cell methods and mathematical models,” on December 20.