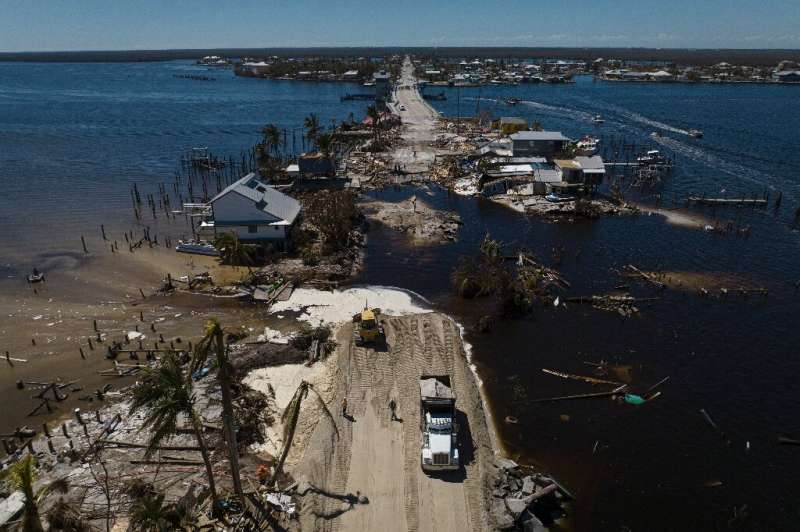 Extreme weather events like Hurricane Ian have provoked calls for US disaster policy to adapt to climate change.

After an extreme weather event, such as Hurricane Ian which devastated parts of Florida last month, most Americans choose to rebuild rather than move to less hazardous areas.

But as climate change increases the frequency and scale of natural disasters, does US policy need to adapt?

Gavin Smith, a professor of environmental planning at the University of North Carolina, worked for several states following major hurricanes, including Katrina in Mississippi (2005) and Matthew in North Carolina (2016).

According to him, current reconstruction standards are not up to the challenges posed by climate change, but correcting them will require real “political will.”

Smith’s responses to AFP have been lightly edited and condensed for clarity.

Q: What are the rules for re-construction after a hurricane, and are they adapted to climate change?

A: Communities must comply with the local codes and standards in place in their jurisdiction before the storm struck.

In the US, we have the National Flood Insurance Program (NFIP), which has historically been subsidized by the federal government.

For a community to join the program, it has to adopt certain flood risk reduction standards. They include building codes as well as land use plans.

Then, if a home is damaged in the storm more than 50 percent of their value, it must be built back to the most recent code and standards in place.

Our standard for flood is rebuilding largely back to the “100 year flood,” more accurately termed the one percent annual chance flood event. But in an era of climate change, that “100 year” flood is happening more and more often.

Most risk reduction codes and standards often reflect a climate of the past.

For example, we spent $14 billion rebuilding the levee system in New Orleans after hurricane Katrina. That levee system was built back to the “100 year flood.”

So you could make the argument that in the era of climate change, that levee system is already out of date.

Q: What do you expect from government officials?

A: Disasters can present opportunities to rebuild communities safer.

What I’m suggesting is that if we’re going to spend hundreds of millions of dollars building these communities back, we need to require communities to adopt higher codes and standards.

But that takes political will of both members of Congress and local elected officials.

You’ll also have builders and the private sector saying, “We should limit those kinds of regulations, as we need to quickly rebuild.”

It takes a lot of political will for a mayor or for a governor to say “No, we’ve got to do what’s right in the long run.:

Unfortunately, people don’t get elected by saying “I am going to require higher standards.”

That’s not a winning slogan. It takes political will to say, enough is enough, we need to adopt higher standards, it’s going to take time, cost more, and people may have to pay more to do it.

That said, we also need to make sure we include equity in processes adopted to develop those standards.

The shrimpers and the crabbers that live in a very modest house on the water, if we make them adopt higher standards, can they afford it?

Q: Concretely, what would be these better standards?

A: A really simple way to think about it is “where” and “how” you build in relation to natural hazards, including those exacerbated by climate change.

The “how” include elevating structures, more stringent standards for wind performance, like better roof shingles, hardening our infrastructure—communication systems, bridges, roads, levees… We can also do this by protecting natural systems like dunes and wetlands.

The “where” is what we would often refer to as land use planning.

Should we be putting a hospital, or a school, in an area subject to storm surge? Probably not.

A community may choose to say, we’re not going to build a house within 200 meters of the beach.

Or adopt a gradual disinvestment strategy in extremely risky areas (managed retreat). It’s very difficult to do politically, but it’s happening on a small scale.

Resilience is really about a series of protective measures or choices. It’s not just one. A levee, if that’s your only protection and it fails, to me that’s not resilience.