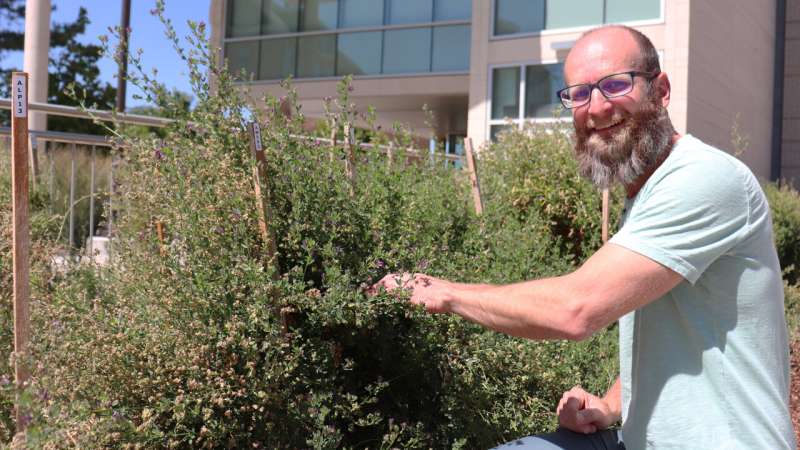 Zach Gompert, associate professor in USU’s Department of Biology and Ecology Center, is lead author of a paper investigating genetic effects in interacting species in the Proceedings of the National Academy of Sciences. Credit: M. Muffoletto/USU

The greatest diversity of life is not counted in the number of species, says Utah State University evolutionary geneticist Zachariah Gompert, but in the diversity of interactions among them.

“It’s often unclear if the outcome of an interaction, such as whether a microbe can infect a host, is the same for all members of a species or depends on the genetic makeup of the specific individuals involved,” says Gompert, associate professor in USU’s Department of Biology and Ecology Center.

For example, he says, one might ponder why a particular butterfly either can or can’t feed on a particular plant.

“We show that genetic differences among Melissa blue caterpillars and alfalfa plants account for nearly half of the variability in caterpillar growth and survival,” says Gompert. “Our results suggest individual variation matters, and the outcome of this plant-insect interaction is affected by many genes with mostly independent—or additive—effects. Moreover, genetic differences among alfalfa plants have consistent effects on caterpillar growth in multiple butterfly populations and species, making such effects predictable.”

Collecting extensive data over several years at field plots in Utah and Nevada, the team’s results support the hypothesis that both plant and insect genotypes matter, and about equally so for caterpillar growth and survival.

Beyond issues specific to insects and their host plants, genetic variation within species could also be important for other host-parasite interactions, Gompert says. “Including, for example, susceptibility to parasitic diseases in humans and other animals being a function of both genetic variation in hosts and among pathogen strains. But the generality of this hypothesis remains to be tested.”