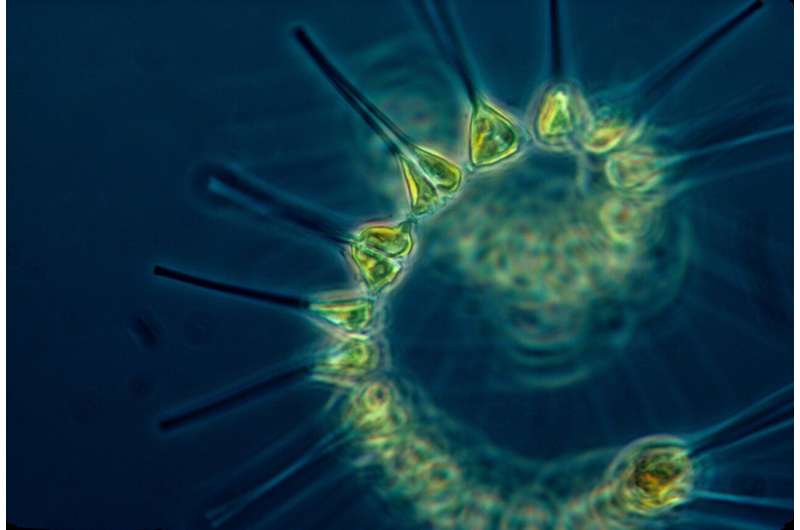 Until now, it’s been a common belief that the packed sea ice of the Southern Ocean blocked all light from reaching the sea beneath, preventing phytoplankton—tiny algae that are the base of aquatic food webs—from growing there. The less light available, the less the phytoplankton can photosynthesize and therefore the less phytoplankton there will be, heavily restricting life beneath the ice.

However, research inspired by increasing under-ice blooms of phytoplankton in the Arctic has shown that Antarctic waters also have unexpected denizens, indicating that there is underestimated ecological variability under the ice.

Blooms are often spotted as soon as the sea ice begins its seasonal retreat, supported by plenty of light and freshwater with high iron content. Yet a team led by Dr. Christopher Horvat of Brown University and the University of Auckland suspected that there would already be potential phytoplankton blooms in waiting. Writing in Frontiers in Marine Science, they described using sampling from independent BGC-Argo floats and climate model output to estimate light availability beneath the ice to test this hypothesis.

“We found that nearly all examples of floats profiling under Antarctic sea ice record increases in phytoplankton before sea ice retreats,” said Horvat. “In many cases, we observed significant blooms.” Horvat also pointed out that the floats only sampled a very small part of the millions of square kilometers of sea ice that might host these under-ice blooms, so there may be many more hidden phytoplankton blooms with the potential to support other life out there.

The floats are thrown overboard from research vessels and are left to take biogeochemical samples independently: They can even detect near-freezing conditions at the surface of the water and dive to avoid being damaged by ice. The key measurements in this case were levels of chlorophyll-a, a pigment shared by all phytoplankton, and particulate backscatter, which can be converted to an estimate of phytoplankton carbon because phytoplankton scatter light in proportion to their size and concentration. In the end, the team used data from 51 floats that made 2,197 under-ice dives from 2014–2021, which they collected into 79 sequences of measurements.

“We used a new data product derived from a new NASA satellite, the ICESat-2 laser altimeter, to understand the compactness of ice around Antarctica, and with a suite of global climate models considered how much light reached the upper ocean,” said Horvat.

“We found that 50% or more of the under-ice Antarctic might support under-ice blooms, because sea ice in the Southern Ocean is comprised of discrete floes, and small areas of open water permit light and therefore photosynthetic life.”

Measuring under compact sea ice with complete or nearly complete coverage of the water below, the scientists found 88% of sequences of measurements recorded a rise in phytoplankton before the retreat of the sea ice, and 26% met the criteria for an under-ice bloom.

However, the authors cautioned that the floats could sample under the ice but couldn’t return data from these positions, meaning that the coordinates for sample locations are not completely precise. “It is possible some of the high productivity events might be recorded in regions with low sea ice cover,” Horvat said.

“Because the time we observe these blooms is close to when sea ice retreats, it is also possible some of the phytoplankton come from processes occurring outside of the sea ice zone, though we consider this unlikely given the sheer number of high-productivity measurements we found.”

The implications for Antarctic ecosystems could be significant. “Higher trophic levels migrate to where the productivity is, and if it is under the ice, one might expect the food web follows,” Horvat pointed out. Further research will be needed to understand how these hidden ecosystems function, and whether the phytoplankton blooms attract predators and prey beneath the ice.