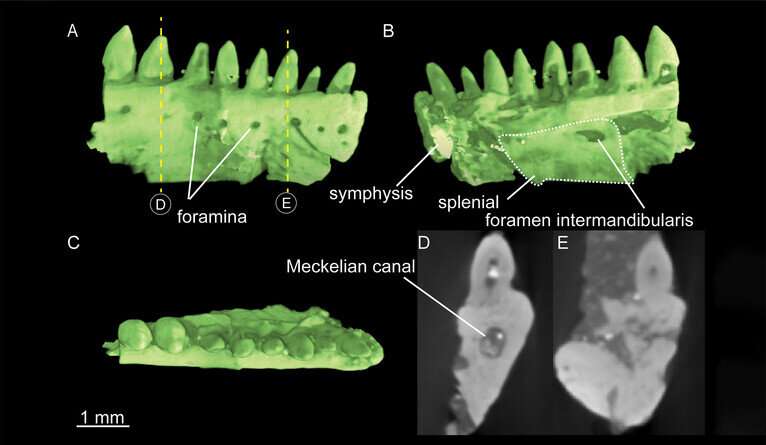 The lower jaw of Palacrodon provided researchers with information about the reptile’s teeth. Credit: Yale University

An extinct reptile’s oddly shaped chompers, fingers, and ear bones may tell us quite a bit about the resilience of life on Earth, according to a new study.

In fact, paleontologists at Yale, Sam Houston State University, and the University of the Witwatersrand say the 250-million-year-old reptile, known as Palacrodon, fills in an important gap in our understanding of reptile evolution. It’s also a signal that reptiles, plants, and ecosystems may have fared better or recovered more quickly than previously thought after a mass extinction event wiped out most of the plant and animal species on the planet.

“We now know that Palacrodon comes from one of the last lineages to branch off the reptile tree of life before the evolution of modern reptiles,” said Kelsey Jenkins, a doctoral student in Yale’s Department of Earth and Planetary Sciences in the Faculty of Arts and Sciences and first author of the study, which appears in the Journal of Anatomy. “We also know that Palacrodon lived in the wake of the most devastating mass extinction in Earth’s history.”

That would be the Permian-Triassic extinction event, which occurred 252 million years ago. Known as “the Great Dying,” it killed off 70% of terrestrial species and 95% of marine species.

Although a large number of reptile species eventually bounced back from this extinction event, the details of how that happened are murky. Researchers have spent decades trying to fill in the gaps in our understanding of key adaptations that enabled reptiles to flourish after the Permian-Triassic extinction—and what those adaptations may reveal about the ecosystems where they lived.

Palacrodon may help answer some of those questions, Jenkins said.

But first, she and her colleagues had to get a better look at the little reptile.

A specimen of Palacrodon (top) from Antarctica and a CT scan (bottom) of the specimen.

Until recently, what was known about Palacrodon came from examinations of cranial fragments from fossils found in South Africa and Arizona. The information gleaned from those fossils was so limited, however, that Palacrodon was left out of most scientific analyses of reptilian evolution.

For the new study, Jenkins and her colleagues—including co-corresponding author Bhart-Anjan S. Bhullar, assistant professor of Earth & planetary science at Yale and an assistant curator at the Yale Peabody Museum of Natural History—brought a new analytical approach to bear in examining Palacrodon.

Specifically, they used computed tomographic (CT) scanning and microscopy to analyze the most complete Palacrodon specimen, a fossil from Antarctica. Bhullar’s lab at Yale is particularly known for its innovative use of CT scanning and microscopy to create 3D images of fossils. (Jenkins and Bhullar also did field work in South Africa and the southwestern U.S. relating to Palacrodon.)

Using the technology for this study, the researchers were able to obtain characteristics of the reptile’s teeth, as well as other physical features. It revealed that Palacrodon’s teeth were best suited for grinding plant material and that the reptile was likely capable of occasionally climbing or clinging onto vegetation, they said.

“Palacrodon’s unusual teeth, and a few other specialized features of its anatomy, indicate it was likely herbivorous or interacting with plant life in some way,” Jenkins said. “This signals the early rebound of plants, and more broadly the rebound of ecosystems following this mass extinction.”

Jenkins said the study points to a need for further examination of fossils from the time period just after the Permian-Triassic extinction event.

Why Nevada wants to use drones inside prisons

Locals try to save threatened, traditional