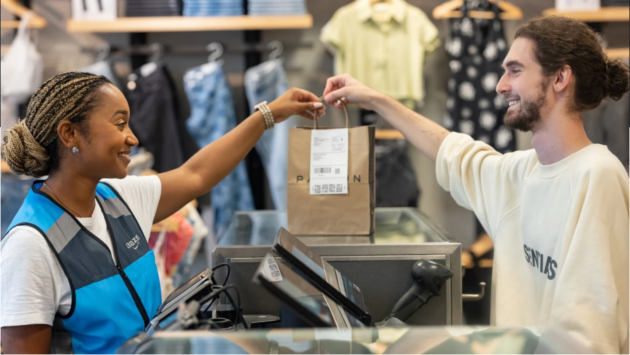 PacSun employee handing over an order to an Amazon delivery driver. (Amazon Photo)

Amazon announced Monday that it is launching same-day delivery options for items from retailers including PacSun, GNC, SuperDry and Diesel.

The service, now available in select cities, is free for U.S.-based Prime members who spend at least $25 on select items and $2.99 for members who spend below $25. Customers can also buy the items on the Amazon app or website and pick it up from the stores.

It’s the latest example of Amazon extending its shipping operations beyond its own digital wall. Earlier this year Amazon launched a separate program that lets Prime members buy items on non-Amazon e-commerce sites just as they would on Amazon.com, including streamlined checkout and free delivery of items as soon as the next day.

Amazon has been competing more directly with UPS and FedEx in delivery, a move that analysts have been anticipating since last year. Other retail giants such as Target and Walmart also offer their own same-day delivery services.

Amazon says it plans to expand the new service to additional retailers and cities around the country in the coming months. The service is available for Prime members in Atlanta, Chicago, Dallas, Las Vegas, Miami, Phoenix, Scottsdale, Seattle, and Washington D.C.

It’s a date: Blue Origin gets set to launch space crew that will mark milestone for Portugal and Egypt