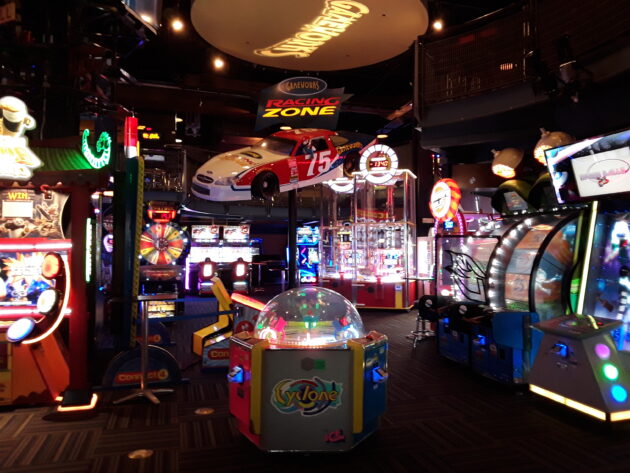 The view from the first floor inside GameWorks Seattle. (GeekWire Photo / Thomas Wilde)

Before its closure in late 2021, the GameWorks downtown arcade bar on 7th Ave. was a hallmark of Seattle’s geeky gaming community. It’s now under new management, by old managers, and plans to reopen its doors on Aug. 2.

I had the chance to take a tour through the new GameWorks in advance of its opening day, with Darren Des Roches providing the tour.

“We’re touching up the paint, polishing the floors, and getting everything organized,” Des Roches told me. “My phone’s been ringing, my email’s been blowing up. Our managers, who all worked here prior to us shutting down, have all come back, and lots of [former] staff are reaching back out. There is lots of excitement in the community.”

If I had to summarize my immediate reaction upon walking through GameWorks’ front door again, it’d be, to my surprise, “business as usual.” There’s a distinct feeling of continuity to GameWorks’ arcade floor; it’s less a new start and more of a return from an extended absence.

None of GameWorks’ arcade machines were sold off or removed after its closure, and none have been added in the intervening time frame. I’ve spent a lot of long evenings at GameWorks, and I recognized almost every game that’s currently in the building.

The newest games on the floor are a couple of the bigger carnival-style attractions that were added just before the location shut its doors in 2021, such as two virtual-reality booths for playing the rhythm game Beat Saber. Not much is new, but nothing’s missing either.

There has been some reorganization, however, largely in the service of themed arrangements. “It’s always good to reimagine yourself and reinvent yourself a little bit,” Des Roches said. 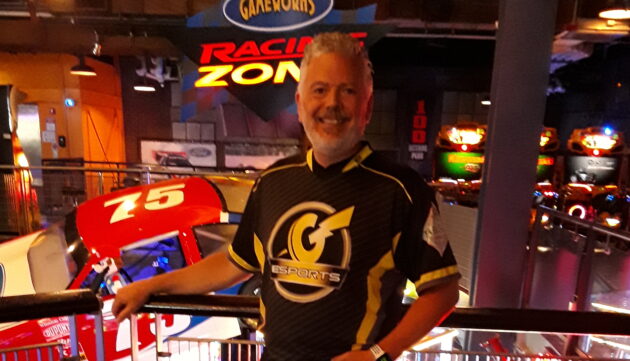 Darren Des Roches: “We are very, very happy to be coming back.” (GeekWire Photo / Thomas Wilde)

Many of the fighting games that used to be randomly scattered across GameWorks’ second floor are now in a booth by the entrance, and a designated “retro lounge” on the 2nd floor features classic arcade machines like Frogger and Galaxian next to the big 4-player Pac-Man cocktail cabinets.

Several arcade cabinets like Dance Dance Revolution have been added to the 1st-floor seating area, along with several pinball and skee-ball machines, in an effort to add what Des Roches calls “connectivity” between the restaurant and arcade areas of the venue.

The old esports area has been overhauled and moved to the balcony above the entrance, in order to bring it closer to the bar. The area’s now more open-air, and features an assortment of security-locked PlayStation 4s and Xbox Ones next to an overhead row of new Alienware PCs. Each station features a new black gaming chair from Cougar.

For what Des Roches describes as “bring your own controller” nights and other similar events, there’s a big open area by the bar on the second floor that can handle most setups. Some new furniture also been added throughout the building, to create more lounge areas and open seating. 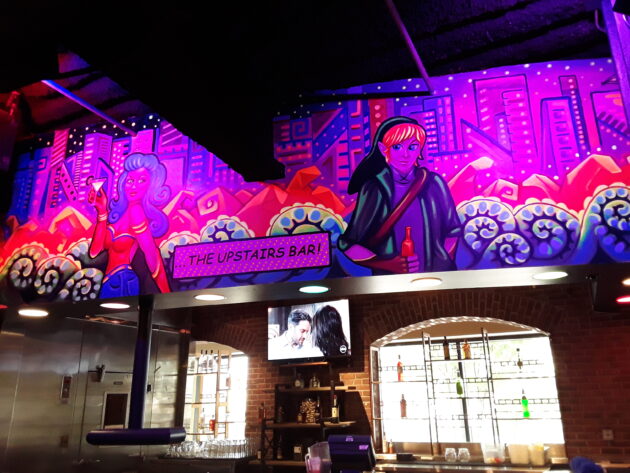 Once again, you are invited to come drink with Link. (GeekWire Photo / Thomas Wilde)

The menu hadn’t been finalized at the time I was there, but Des Roches describes it as once again being “classic American cuisine with a little bit of an edge to it.”

It’s reflective of what appears to be GameWorks’ initial primary focus: reestablishing its ties with Seattle and its overall nerd scene. The Seattle Online Broadcasters’ Association (SOBA), an organization for Washington state’s community of livestreamers, has already booked its next big meetup at GameWorks on Aug. 13.

“We’ll have the full array of esports games,” Des Roches said. “We’ll have the Super Smash Brothers, the League of Legends, we’ll do the Street Fighter stuff. We’ll have all the PC-based games that people have known us to have, and then we’ll start adding on from there as we bring in new titles.”

“We’ve had lots of inquiries already about certain nights of the week having different events, like Smash having Friday night or the fighting-game community getting Tuesday night. We’ll slowly integrate those back in, making sure that we’re putting our best foot forward for the esports community.” 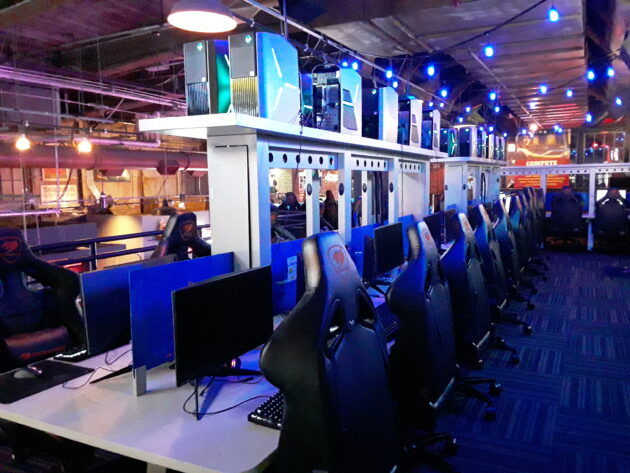 On opening, GameWorks intends to observe all of the current state and local guidelines for COVID safety. When I was there, I saw multiple signs establishing health guidelines, including a strong encouragement to wear masks inside, as well as multiple stations for hand sanitizer. A sign in the esports area required customers to check with employees before touching any of the equipment, so that it can be thoroughly sanitized between uses.

It’s not quite back to a pre-pandemic normal, then, but this does fill the gap that GameWorks’ closure left in Seattle’s nerd culture. GameWorks had a combination of easy access, a central location, and venue flexibility that made it a crucial location for many of the city’s local scenes. For many of the affected communities, there really wasn’t any convenient way to replace it.

Right now, the plan behind the scenes at GameWorks is still to leave off any big decisions about the business’s future until six months after the relaunch.

“We’re going to open up, welcome the community back, and work out the systems,” Des Roches said. “Obviously, around the country, staffing’s been an issue, so we’re going to make sure we’ve got the right people in the right places.”

“As things progress, we’ll make the business decisions then,” he continued. “If it comes a little bit earlier, then great. If not, then six months is our window … before we do anything major, or buy new games, we want to get open, get the thing working again, and get it humming on all cylinders. Then we can launch into new initiatives.”

CME to Roll Out Euro-Denominated Bitcoin and Ether Futures on Aug. 29