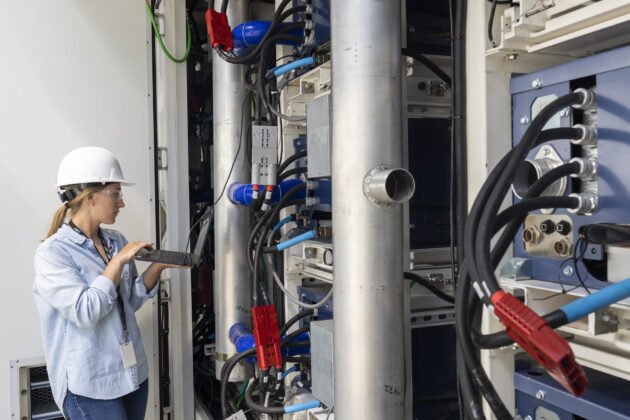 Hannah Baldwin, an electrical engineer for the high-power stationary group at Plug Power, inspects a fuel cell in the generator built in New York in partnership with Microsoft. (Microsoft Photo / John Brecher)

Data centers packed with millions of servers provide the backbone of the internet, dishing up everything from cat videos to financial transactions to online gaming when and where you need them.

Given data centers’ importance, their operators — including Microsoft, Amazon and Google — take great pains to make sure there’s always power available to keep them running. That means having sufficient backup energy from diesel generators and batteries in case of power outages.

Microsoft has been working on cleaner alternatives and on Thursday announced what it’s calling a “moon landing moment” for the data center industry: the successful demonstration of a large-scale generator that runs on hydrogen fuel cells.

“Nothing existed like this prior to us starting this research project and inspiring the fuel cell companies to really think about stationary power,” said Mark Monroe, a principal infrastructure engineer for Microsoft, in an interview with GeekWire.

Hydrogen is generating increasing buzz worldwide as a versatile, clean burning fuel. Microsoft developed the pilot-project generator with Plug Power, a company specializing in fuel cells and hydrogen energy. The backup generator can produce up to 3 megawatts of power, which is enough to replace one diesel generator. The fuel cells are housed inside two, 40-feet-long shipping containers. 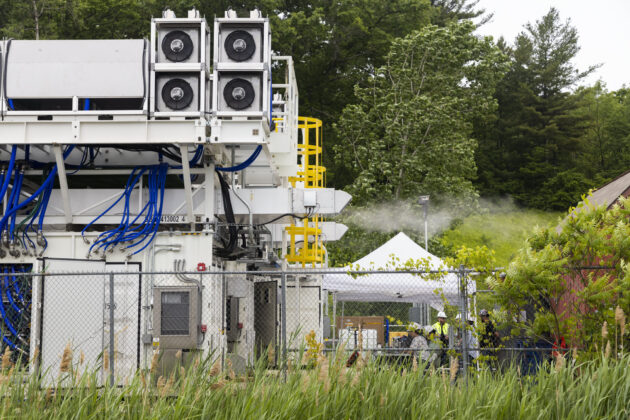 Microsoft and Plug Power built a backup generator in Latham, New York that’s powered by hydrogen fuel cells that generate electricity, heat and water. Most of the water is released as liquid, but some vents as steam, as captured here. (Microsoft Photo / John Brecher)

There are lots of reasons for tech companies to pursue clean backup power, said Sebastian Moss, editor-in-chief for DatacenterDynamics, a London-based provider of data center analysis.

“Getting off of diesel would have multiple benefits beyond the basic moral imperative.”

“Getting off of diesel would have multiple benefits beyond the basic moral imperative,” Moss said by email. “It is easier for data centers to get permits because they don’t have to worry about [pollution] particulates, and it means lower emissions for increasingly climate-conscious customers.”

Microsoft, in fact, has a tool for customers to calculate their Azure-based emissions. And it set a 2030 goal of becoming carbon negative, meaning it removes more carbon than it releases.

Over the past four years, Microsoft has been testing smaller versions of hydrogen fuel cell generators. The company has worked in collaboration with researchers from the National Renewable Energy Laboratory in Golden, Colorado and Power Innovations in Salt Lake City. The newest project with New York-based Plug Power generates 36-times more energy than their initial effort.

The cells are fed hydrogen that’s created as a byproduct in the industrial manufacturing of chlorine and sodium hydroxide. This source is considered “blue hydrogen,” meaning there are some climate impacts from the fuel. Microsoft plans to shift to climate-neutral “green hydrogen” as its fuel, but it’s currently in limited supply. 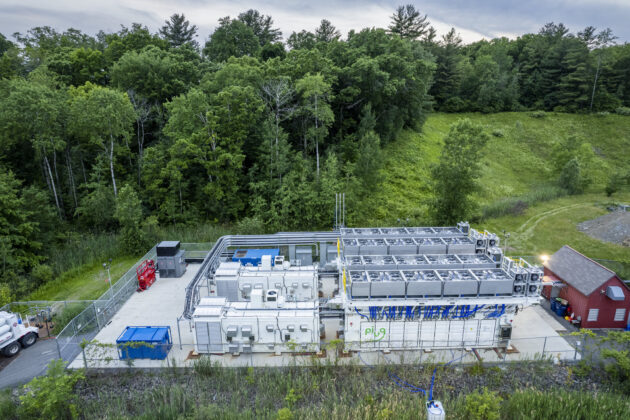 Microsoft officials declined to say how many diesel generators it’s using, calling it “more than hundreds.” Google has estimated that there are around 20 gigawatts of backup diesel generators around the world, said Moss, of DatacenterDynamics.

But even at that level, the footprint isn’t gigantic.

“Emissions from diesel backup generators are a small share of operational emissions for many large data center operators, so the immediate climate benefits are likely to be small,” said George Kamiya, a Paris-based digital energy analyst with the International Energy Agency (IEA).

The bigger impact, Kamiya said by email, is the potential for expanding this technology to sectors like hospitals that also rely on diesel generators.

“This could in turn have benefits for the electricity grid,” he said, “while also reducing emissions over the longer term.”

But there are more hurdles to overcome before hydrogen fuel cells become a more widespread solution.

“Microsoft has been leading the hydrogen charge, but [hydrogen] does not have the same energy density as diesel so you need to use up a lot more space to store the same amount of energy,” Moss said. “It also does not have anywhere near as robust a supply chain, so you can’t guarantee continuous supplies when your reserves run dry.”

Microsoft officials agreed that the suppliers for the fuel cell hardware and green hydrogen are lacking. But there are so many potential applications, the hope is that the software and cloud giant can help create demand for the sector to spur its growth.

“That’s why this topic is interesting to us,” said Brian Janous, Microsoft’s general manager of Energy & Sustainability. “Because well beyond this demonstration project, it’s really about how do we lean in to help really accelerate the hydrogen economy.”