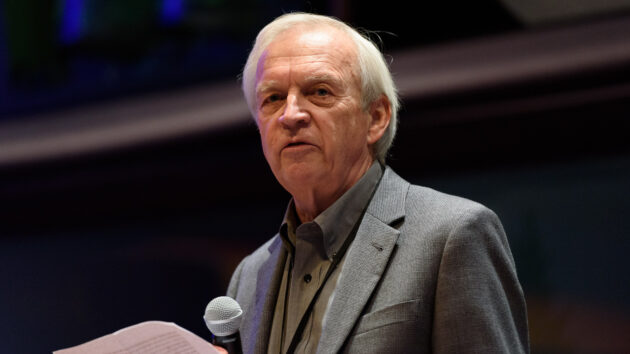 Tom Alberg, a Seattle business and civic leader who played an instrumental role in the creation of industries ranging from e-commerce to wireless communications, died peacefully at his home on Friday. He was 82.

An investor, lawyer and champion of Pacific Northwest tech, Alberg was known nationally for his early investment in Amazon and his longtime role on the company’s board. But in his beloved hometown of Seattle, his legacy extends far beyond helping to launch one of the most influential companies in the world.

Alberg was a prominent lawyer for aerospace and tech companies, and executive vice president of McCaw Cellular Communications, a groundbreaking telecom company. He co-founded Madrona Venture Group, a venture capital powerhouse that has fueled the growth of some of the region’s best-known tech companies. He was central in the creation of the Alliance of Angels, helping to give countless early stage startups a chance at long-term success.

Through it all, Alberg developed a reputation as a visionary, a key behind-the-scenes player in regional business and civic initiatives, a humble mover-and-shaker who was optimistic by nature and animated by the promise of the future.

“Tom saw something in Amazon before most people did,” wrote Amazon founder Jeff Bezos in a 2020 letter marking Madrona’s 25th anniversary.

“I think it was because he shared my vision that the Internet was a disruptive force that could improve business and people’s lives,” he said. “We were selling books but were a tech company at heart and had the opportunity to use a revolutionary technology to create a better customer experience. So he wrote us a check.”

My friend and a friend to many, Tom Alberg, has passed away. He was an early investor in Amazon and served on our board for 23 years. Tom was a visionary and also just a wonderful, good man. I was so lucky to have you in my life, Tom. We will all miss you dearly. pic.twitter.com/JsRvxt8rI0

Alberg was on the Amazon board for 23 years, stepping down in 2019.

“His professional and civic accomplishments were many,” Amazon CEO Andy Jassy said in a tweet Saturday. “But, what impressed me most was his character — humble, high integrity, missionary, cared about his community — as good a guy as they come. Learned a lot from Tom. Will miss him.”

Those close to Alberg praised his commitment to his community and devotion to his family, which included five children. He acted in leadership roles for the Pacific Science Center, the Intiman Theatre and the Technology Alliance. He founded the nonprofit Oxbow Farm and Conservation Center and an esteemed winery.

“Through his work, vision, and humanity, he had a profound impact on both our industry and community,” Microsoft CEO Satya Nadella said on Saturday.

One of Alberg’s longtime friends and colleagues, John Stanton, the Seattle Mariners chairman, wireless industry veteran and investor, described him as “curious, fiercely intelligent but gentle,” in the foreword to Alberg’s 2021 book, “Flywheels.”

“As a lawyer, executive, board member, investor, and, crucially, as a social entrepreneur involved in everything from autonomous vehicles to organic farming and the challenges of homelessness, Tom has been one of the seams holding the quilt of the Pacific NW together,” wrote Stanton, who worked with Alberg at McCaw Cellular.

In announcing Alberg’s death, his Madrona colleagues wrote that “Tom was simply an amazing person… He had immense vision and courage to take risks while not seeking the limelight or recognition for his personal impact.”

Alberg never stopped thinking about what was next. In his early 80s, in what would be the final years his life, he was penning commentaries about the potential for quantum computing, commissioning studies about the promise of self-driving cars, and writing a book about what he saw as the critical need for tech and civic leaders to work together for the mutual benefit of their communities.

“He’s a man who sees only the vision,” said Challenge Seattle CEO and former Washington Gov. Chris Gregoire, in 2020. “He doesn’t let people say ‘no’ to a vision and believes that if you empower them by making them think about a vision of the future, there’s probably not a whole lot we can’t accomplish.”

The pull of local roots

Born in 1940, Alberg grew up in a time when many saw Seattle as a sleepy outpost fueled by timber and fishing. He graduated from Ballard High School where he was class president twice. He left the city to attend Harvard as an undergraduate, and earned a law degree from Columbia University in 1965.

He practiced law in New York for a time, but was eager to return to his hometown, which felt to a young Alberg as more ripe for opportunity than the Big Apple and its entrenched companies and social structure. 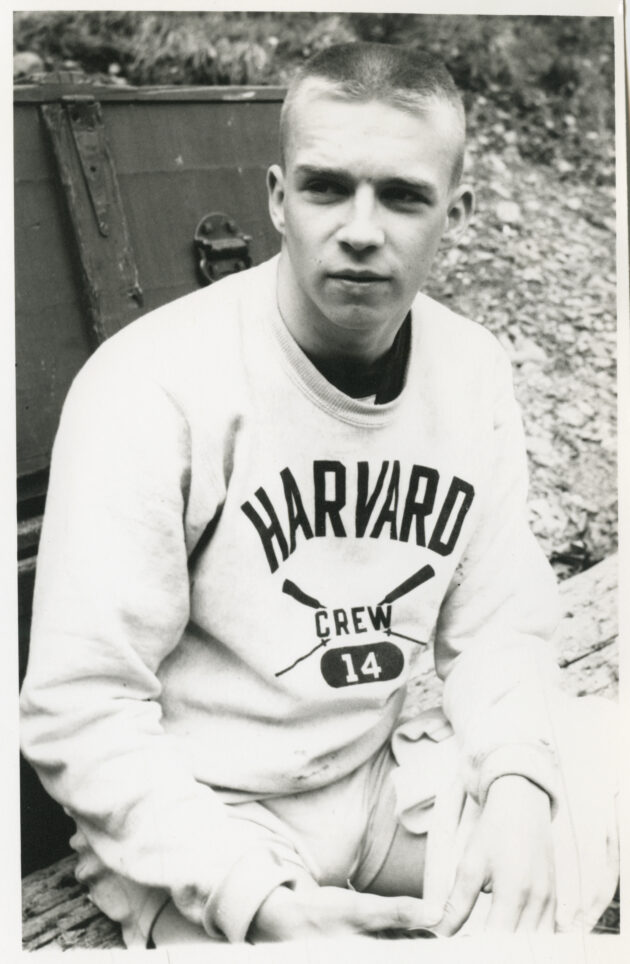 Alberg rowed crew for Harvard University, from which he graduated in 1962. (Photo courtesy of the Alberg family)

Alberg joined the firm that is now Perkins Coie where he was principal counsel for aviation giants Boeing Company and Alaska Airlines as well as early technology companies. Around that time Alberg was becoming fascinated by consumer tech and was an early adopter of the VCR and Apple II computer.

“The den of our house was like a cauldron of the future with all the gadgets,” said his son John Alberg in an earlier GeekWire interview.

While an accomplished attorney, Alberg was tugged by entrepreneurial yearnings that he traced to his Swedish paternal grandfather who had immigrated to America decades earlier. So in 1990, he went to McCaw Cellular, first as a lawyer, then a company leader. Four years later, McCaw merged with AT&T.

Alberg wasn’t keen to join a giant, bureaucratic company. He was, however, eager to stay in innovation. The following year he made two bold decisions that catapulted his career and professional stature.

In 1995, a newbie to Seattle named Jeff Bezos was looking for investors for his nascent virtual bookstore. Alberg was one of the people he approached. Alberg didn’t know much about the internet, “but I knew some because of McCaw, and I did think it was a big deal,” he told GeekWire in a 2020 interview.

With encouragement from his son John, Alberg invested in Amazon’s seed round and the following year joined its board. Bezos praised his contributions when Alberg left the board after serving for 23 years.

“I’ll miss his sound judgment, deep well of business & life experience, and his quick wit,” Bezos tweeted at the time. “He’s a smart business person and even better human.”

Alberg acknowledged that he had underestimated Amazon’s potential, even when he decided to write that game-changing check.

“When it started, I don’t think Jeff or any of us had any idea of what Amazon would grow to,” Alberg told GeekWire in 2019. “We thought selling books on the internet had some real possibilities, but the focus was books. Maybe we could sell CDs, eventually.”

But Amazon wasn’t Alberg’s only big bet in 1995. That year he and three friends — Bill Ruckelshaus, former head of the U.S. EPA twice over and former acting director of the Federal Bureau of Investigation; Jerry Grinstein, former CEO of Burlington Northern Railroad and Delta; and Perkins Coie partner Paul Goodrich — joined forces to create what they called Madrona Investment Group, a vehicle for backing other promising Northwest entrepreneurs. 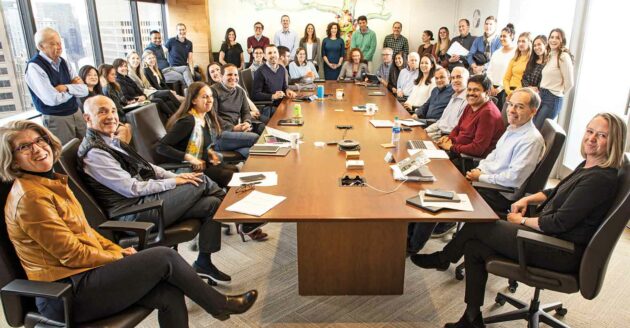 The Madrona team photo from 2020. Alberg is on the left, standing. (Madrona Photo)

The audacity of the move still surprised Alberg decades later.

“I don’t know why we were willing to take this risk,” Alberg once told GeekWire. The group had financial means, but not vast resources. “Somehow we were thinking, well, we’d make these investments and five years later they might be worth something,” he recalled.

Madrona Venture Group, as it’s now known, has invested in more than 200 early-stage companies, primarily from the Northwest. While some fizzled, 24 have gone public and 50 have participated in mergers and acquisitions. The firm manages $2.4 billion.

Madrona has backed some of the most significant companies to emerge from the region in recent decades, including Smartsheet, Redfin, Apptio, Impinj, Qumulo, Turi, Highspot, SeekOut, Rec Room and others, as well as some startups outside the area, such as Snowflake.

‘What is going to be’

By the late-’90s, Alberg’s bullishness toward his hometown was outpacing even Madrona’s reach.

So he teamed up with another roster of heavy hitters: Bill Gates Sr., father of Microsoft’s Gates and a long-time civic booster, and Tom Cable, an investment banker and founding investor in Immunex. They sent a letter to friends and colleagues urging them to consider investing in startups. The trio envisioned a “virtuous cycle” in which wealthy individuals recycled some of their largesse back into local entrepreneurs, stoking the startup community.

The result was the Alliance of Angels, a nationally prominent group and the Pacific Northwest’s largest angel investment organization. 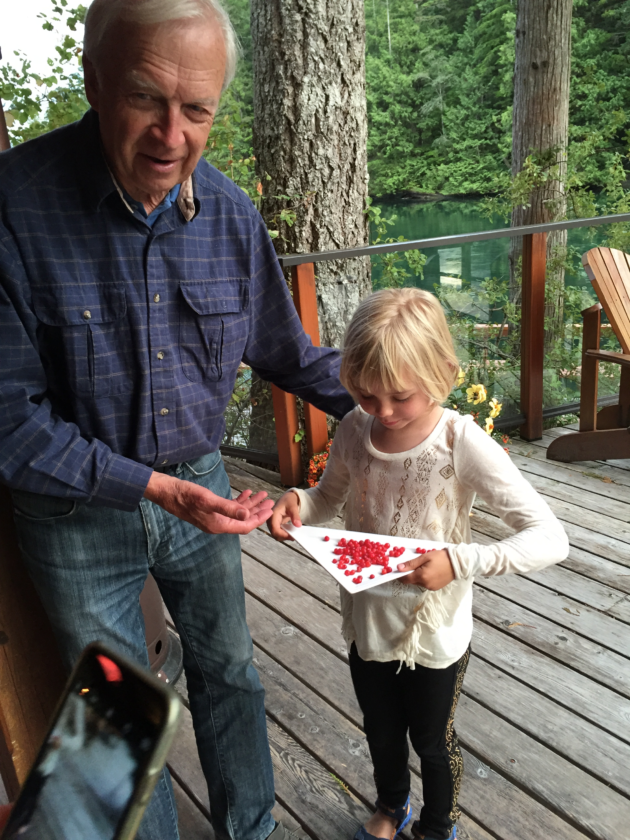 Little known fact about Alberg: he loved huckleberries, as displayed here with his granddaughter. (Photo courtesy of John Alberg)

But Alberg’s passion for the region extended beyond its startup founders and into its forests and fields.

Growing up, he hiked wooded trails with the Boy Scouts and explored Washington’s rural corners with his dad, who bought agricultural land near the Snoqualmie River and in the Columbia Valley.

He cultivated a green thumb, and when Alberg had a family of his own, they settled in one of Seattle’s toniest neighborhoods — the gated community of Broadmoor on Lake Washington. Among the fastidiously landscaped homes, Alberg planted a vegetable plot in his yard to the likely dismay of some neighbors but delight of his kids.

The Albergs cherished their summer sailing trips to the San Juan Islands and the pristine waters east of Vancouver Island. The papery-barked madrona tree that’s the namesake of Alberg’s investment firm is iconic to the islands.

In recent decades, he began playing a larger role in managing some of the land originally purchased by his father. His family planted wine grapes on their Columbia Valley property, leading to the genesis of the Novelty Hill Januik winery. He and his second wife, Judi Beck, years ago turned Snoqualmie’s Oxbow Farm into a nonprofit that hosts school kids and grows sustainable crops and native plants.

While tech and farming might appear as contrasting interests for Alberg, his family saw the through line.

“Almost everything he does is about what is going to be — whether it’s planting a tree that won’t be mature for 80 years to investing in driverless cars, which he’s so excited about,” said his daughter Katherine Anderson in 2020. “He just believes in what hasn’t happened yet.”

Alberg is survived by his wife, Judi Beck; his children Robert, Katherine, John, Carson and Jessica; and his four grandchildren. His family requests that donations be made in Alberg’s name to the Oxbow Farm and Conservation Center.