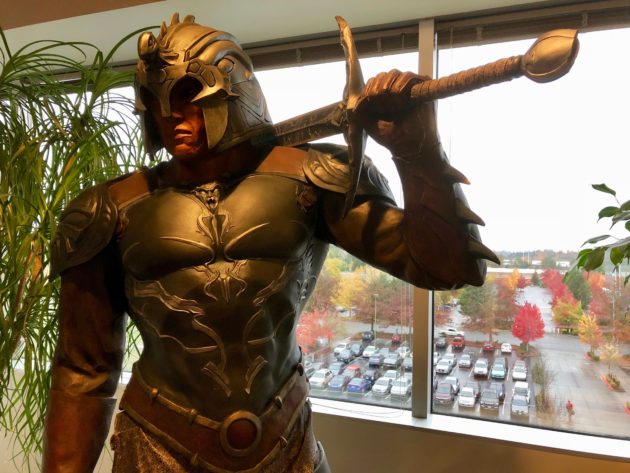 Inside the Wizards of the Coast headquarters in Renton, Wash. (GeekWire Photo / Kurt Schlosser)

The new studio, Skeleton Key, is headed by Christian Dailey, a 30-year veteran of the games industry with experience at THQ, Pandemic, and Electronic Arts.

Dailey recently left BioWare after a four-year stint as an executive producer, where he worked primarily on the Dragon Age series of open-ended computer role-playing games, including the forthcoming fourth installment. Dailey joins Wizards as a vice president and Head of Studio for Skeleton Key.

“I am excited to be starting this new adventure with the company that has created so many of my favorite toys and games growing up,” Dailey said in a press release. “We are looking forward to growing our studio team with more talented creators who share our passion.”

Wizards has only said that Skeleton Key’s debut project is a “new AAA video game,” with no details about its genre, setting, or intended audience. The “AAA” label typically means that the studio will enjoy significant funding and employ a large team of creatives; that in turn means that it’s unlikely there’ll be any more news from Skeleton Key for the foreseeable future, as AAA games can take several years to make.

“We are thrilled to continue to build our roster of exceptionally talented digital gaming leaders and welcome Christian to the team,” said Cynthia Williams, Wizards of the Coast president, in a release. “We will greatly benefit from the experience that this team and new studio bring to Wizards of the Coast and Hasbro.”

Chips and Science Act, an ‘historic’ investment in U.S. innovation and tech, goes to Biden for approval